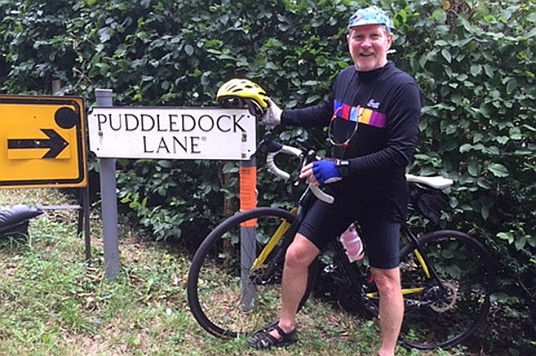 Such a strange name for a little country lane on the heights of our local Kent Weald, so where is it? I had to go back to November, 10 years ago, to find a club ride report which rewarded me with this:

“After the climb upto the top by Botley Hill Farm and later the climb out of Westerham and over Hosey Common, all ensured that I maintained an average heart rate of over 80% of max! Of course the purpose of the ride was not to kill us, but to enjoy the ride! So arriving at the top of Hosey Common we turned off into Hosey Common Lane, a very narrow country lane through woodland, the autumn tints, enhanced by the dappled sunlight through the trees.

Further on the lane starts a steep descent, made tricky by fallen, wet leaves and a rock strewn road surface. The photo shows John Dadson and Sandra picking their careful way down this sunlit cutting. We were all glad when we reached the bottom and turned into the delightfully named Puddledock Lane!

From here it was an easy downhill, except for the final sprint into Four Elms and the tea room at the Chartwell Barns ”

Should you wish to get your heart rate upto 80% of max, or more, then on a return ride from Four Elms, take the long climb up Toys Hill. At the steepest bit, Just before the top of the climb, there is a little turn off to the left. This is the other end of Puddledock Lane. You will be rewarded by a magnificent view of the countryside below, plus a welcoming seat to rest the weary legs before the onward journey!

And the wishing well may be the answer to the name “Puddledock,” it originally being the local source of water for man and beast. Especially the herds of pigs foraging in the surrounding woodlands. And there is precedent for this.

An historic record in 1603, explains that where the River Fleet (by Fleet Street!) flowed into the Thames, horses would be taken there to water. Their trampling on the river bank churned up, or puddled the mud. Hence the name Puddle Dock!

But things got worse.
Another record in 1756 states that Puddle Dock Wharf was by then required by law to be used as a dumping ground for the rubbish and filth collected from the streets. It became busy with barges and lighters to then take it away to dump down river.
With no sewage system, and horse drawn carts. you can imagine what ended up on the streets of London. Needless to say it then became known as Dung Wharf!

So is this how and why, the little country lane in the beautiful Weald of Kent get the name of Puddle Dock? Pigs do tend to cause an aroma!
I have no idea, but – there is a saying – “Where there’s muck, there’s brass!”
In today’s world, rubbish collection and disposal is a huge and profitable business. In Victorian times, “the Great Stink” as it became known, was probably as important to resolve as Climate Change is today. I am sure that there were entrepreneurs who made a bob or two out of disposing London’s stinking and disease causing waste. Enough perhaps, to retire to a big house in the country. And so that the source of this good fortune was not forgotten, perhaps the little byway that bordered the large country estate was named – Puddle Dock Lane?