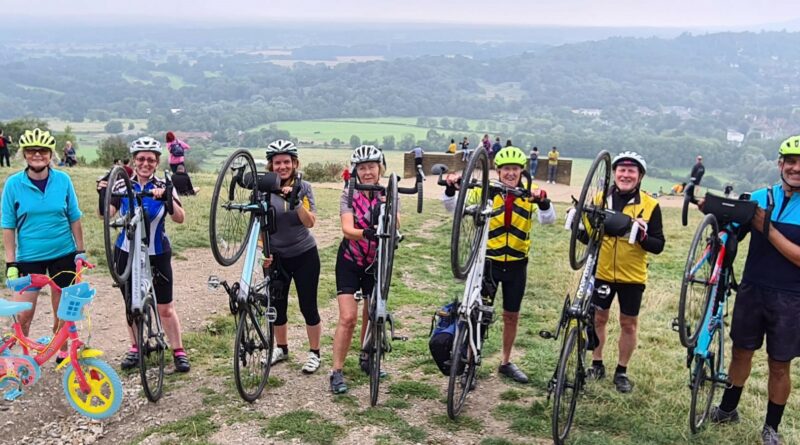 Now in the 21st century, the age of computers and I.T. – it should be a doddle to set up a system by which to start collecting the numbers for the next million Anerley miles. Vince our club data processor and number cruncher, tells me that the reams of information that Strava provides to it’s users – includes the accumulated total milage at year end. Also, the sum total of accumulated elevation gained. All this at the press of a button – what a simple and very useful means by which to start tracking the next million miles by Anerley B.C!

We could even make a start with the figures at the year ended 31st December 2022. It would be interesting to get some idea of how many miles our combined club members have cycled in the past 12 months. Let’s show a bit of team (i.e. Club) spirit, by all those who have Strava or other data of this past year’s mileage, E-mailing their numbers to me and Tom V at anerleygazette@gmail.com. It would be interesting to know some real life mileages.

Mileage and altitude numbers can be used for more than just an academic exercise. They could be used to engender a bit of friendly competition between club members – or just to give each of us some goals to achieve. For example, with the Denise’s Anerley Away Days in Snowdonia this summer, a bit of hill training would not go amiss. How long would it take each of us to “climb Everest” – an accumulated altitude gain of 29,038 feet?

But getting back to the next million miles, my calculations indicated that a yearly average of circa 5,000 by each of us could soon do it – but more would help! And just to show how easy it would be for us in the 21st century to do that, let me take you back a few years. Sorry about the print quality – but it was a bit more than a few years!

The last column on far right shows his accumulative total for the year was 5,066 miles – from 117 days of riding during the year (which equates to 3 rides a week) – which averaged out at only 37 1/4 miles per ride. Not a lot but it soon adds up! And he commented “On the whole a very good riding year. . . . the longest distance ever travelled in one year”

His last ride of the year was on Boxing Day 26th December, for which he records that he went out with the 30 Cycling Club, to Westerham with a total group of 11 riders. In those days of old when the roads were just cart tracks – the conditions of the roads was always shown. On that particular day he notes that it was “dreadful, snow and sand” and the ride was 28 miles. Four days earlier (22 Dec), the weather and roads were “superb” and it was “a grand day” In total they cycled 53 miles, a long way round to “Godstone for dinner – via Lewes” No tea rooms in those days and the stops were usually to pubs for a 3 course meal!

As you would expect, earlier in the year with better weather Anerley BC did longer rides. I chose another 2 page spread at random – which by pure chance included the Club Easter Tour of the West Country, starting as shown below:
11 April by train from Paddington to Reading – then 23 mls by bike to Newbury.

14 April, their longest day, 72 mls on their way back via Winchester “against terrific wind.”

15 April from Winchester 68 1/2 mls to home “in easy stages. Hard with howling wind. Altogether a most glorious tour, not a spot of rain or mishap. Had 2 punctures”

Considering the primitive bikes with only one gear for all up and down hill and the state of the roads back in the 1890s, most of us ought to easily be able to exceed the mileages of G.H and his fellow Anerley club mates. So that next million miles is there to beckon us on!

For this new year of 2023, let’s make a serious effort to get some accurate figures. I am sure that the numbers would be significantly higher once we can see the total mounting month by month.
Could Anerley B.C become the first bicycle club to set a Guinness World Record, by showing that it cycled more than 1 million miles in X number of years? – How about that!