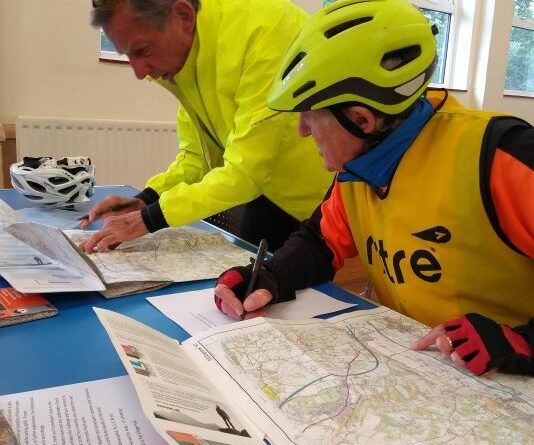 For us cyclists, map reading is principally about finding our way, out and about in new and unknown areas. To do this we need to understand, and be able to use, the grid system shown on O.S maps. It can appear to be very confusing when starting to learn how it works. However it is very logical (and once grasped!) quick and simple to use. To help you to understand the Grid system I have included links to some O.S videos showing how to use maps and their Grid numbers. These will help to make sense of what all the numbers actually mean and show!

We cyclists normally use the O.S Land Ranger series of maps which provide enough information to find our way around using, mainly public roads and our urban infrastructure. Hikers and mountain bikers are better served with the OS Explorer series. They are larger scale maps and so show much more detail, very necessary when travelling cross country with fields, woodlands and far fewer, readily identifiable landmarks.

Above is a diagram illustrating how O.S maps are divided into Grid Squares, using blue, numbered Grid Lines. Each Grid Square covers an area 1 km x 1km and has a unique 4 figure Grid Reference Number so that we can locate something to a specific square.

Above, the bottom left hand square is identified by the two numbers 61 and 32 to provide the 4 figure Grid Ref 6132.

The first number, in this case 61, is always taken from the horizontal line running along the bottom of the grid square. As you can see the numbers 61-62-63-64 run towards the east side of the map, and hence are referred to as the Eastings.

The second number (32) is always taken from the vertical line running up the left-hand side of the Grid Square, in this case from the numbers 32-33-34-35, towards the north of the map – and hence referred to as the Northings

Now that is a simple and logical method to identify a square. The problem for us novices, is trying to remember the sequence of the two numbers – for example is this Grid Square 33/63 or 63/33? Of course you know now, but at next year’s Southern Saunter will you still remember?

Here is a youtube, O.S. video, showing how to use 4 figure Grid References. I hope that it will help to make sense of what all the numbers actually mean!
See https://www.youtube.com/watch?v=c0du8v4EE_Y which follows after the annoying advert.

So far, so good – does the terminology make sense? I hope so because fortunately, as we cyclists normally use the smaller scale Land Ranger maps, we only need to know how to use 4 figure Grid Squares and Reference Numbers.

However unfortunately, on the Southern Saunter, or if you are into mountain and gravel biking, you will be using the more detailed Explorer maps. And for these you need to know how to use 6 figure Grid Reference Numbers, which can more accurately pinpoint things within the 1km x1km Grid Square.

So here is your first test.  Again, the same map illustration is below. You can see that the central Grid Square has been divided into 100 metre x 100 metre small sub-squares. Ignore those sub-squares for the moment – can you identify what the 4 figure Grid Reference is for the complete Grid Square?  Write it down to see if you have got it right!

Before giving the answer to the above question, a bit more about why 6 figure Grid References are used. The 4 figure Grid Squares cover quite a large area (1 square kilometre), by sub-dividing the large Grid square into 100 smaller sub-squares, it is possible to pinpoint something to within a 100 metre square – 10 times greater accuracy, using the same methods as explained above for 4 figure Grid References.

The central Grid Square of the nine shown below, is identified by it’s bottom left numbers – 62/33 (6233). So the answer to the question posed above is that the 4 figure Grid Reference is 6233.

For illustrative purposes only, this central Grid Square has been divided by blue, numbered Grid Lines.  These show that at the bottom left-hand corner of the Grid Square 6233 is a sub-Grid Square which can be identified by the numbers 620/330 to make a Six figure sub-Grid Square.

Now, looking again at the illustration (below) you will see that within the main Grid Square 6233 there is a marked a blue sub-square. Using it’s blue numbered grid lines we can identify this sub-Grid Square by the six numbers – 625/333 (625333)  And anything within that sub-square is only a maximum of 100 metres away.

In practise there are no sub-grid lines marked on the OS maps it would be confusing with so much over printing, but it it is easy to estimate or measure the few centimetres within the printed Grid Square to pinpoint what you want to locate.

I am sure that you have found all this very confusing, however see this Ordinance Survey,  youtube video, which will make it all so much easier to do and understand: