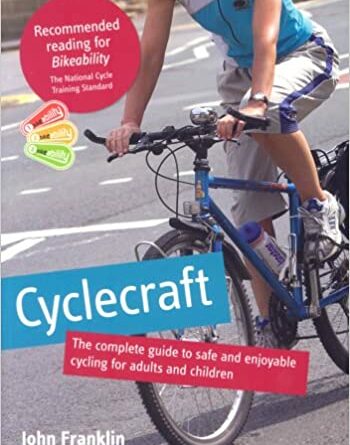 Driving licences (to identify vehicle and their drivers) were introduced in 1903. It was not until 1931, by which time there were 2.3 million motor vehicles on the road and over 7,000 road deaths each year, that a Highway Code was introduced. Even then, it was not until 1935 that Driving Tests became mandatory for all.
Today, there are less than half that number of 7,000 annual road deaths, even though there are now over 27 million motor vehicles. However, although road deaths have reduced substantially, the massive growth in motor vehicles have made our roads a much more dangerous place for cyclists!
It begs the question – should there now be a test for cyclists to increase knowledge and understanding of road safety and awareness? This should greatly reduce the growing number of accidents and deaths among cyclists.

Most, if not all of us have been self-taught cyclists with no formal training. We learnt our competencies over a period of time, often through bad experiences! Most of us will also have learned to drive cars/motor bikes and then been required to study the Highway Code. But how long ago was that? And have you forgotten that it was an automatic fail if not using the rear view mirrors adequately!
But in any case the Highway Code has over the years had many updates and additions, as have the Driving Tests. Probably the two most important being, in 1969 when the Ministry of Transport brought out their own Driving Manual detailing how to drive safely. This almost certainly copied aspects from the system of driving and road positioning taught to Police drivers/motor cyclists.

In 2002 the test was expanded to include Hazard Perception, using real life video clips to test learners’ awareness of a variety of common hazards on our busy roads. Hazard awareness (which includes the use of rear view mirrors), is the most important part of advanced driver/motor cycle courses taught to police drivers.

But is there something comparable from which cyclists can learn about safer cycling? Well yes there is!

In the mid 1990s, after some 40 years since I sold my Italian road bike with its Campagnolo 10 speed “double clanger” deraillier gears, I decide to renew the passion of my youth and bought a push bike. But how traffic had changed over those 40 odd years. And it has got much worse in the 20 years since then!

Having been schooled on the importance of all around awareness when driving cars and motor bikes, I realised that the main hazard when cycling, was from behind. This being due to the slow speed of cycling, compared to that of faster moving cars/lorries, etc. So the first thing I did was buy a handle bar mirror. The second was to visit Purley Library to see if there was a bike riders manual, and yes there was!

It was here that the important concept for cyclists of Primary and Secondary road positions is explained, and much, much, more!

The Highway Code are legal requirements, but it says nothing about how cyclists should position themselves within a lane apart from when dealing with junctions and parked vehicles. There is no rule that says cyclists should always be on the left-hand side of the lane.

In Cyclecraft John Franklin talks about the two main riding positions: the Primary and Secondary riding positions, as shown above. Riding in the Primary position, is all about safety. John Franklin says that this is where you can best see and be seen, and are able to maintain the straightest and fastest course. He explains, “The Primary riding position should be your normal riding position when you can keep up with traffic, when you need to emphasise your presence to traffic ahead, or when you need to prevent following drivers from passing you unsafely.”
Riding in the Primary position discourages this, by forcing traffic behind you, either to stay put or to overtake only when the opposite/adjacent lane is free. (If only they did!)

No one is suggesting that you ride in the Primary position just to be awkward. Far from it. “Because the Primary riding position can result in some inconvenience to following drivers, it is reasonable to ride further to the left when this could help others, so long as your own safety is not thereby impaired,” says John Franklin (his emphasis).

Cyclists on a narrow busy road can create a convoy of vehicles behind them waiting for an opportunity to overtake.  It may be helpful in these circumstances for the cyclist to pull over and let these vehicles pass.  Rule 169 of Highway Code refers to slow moving vehicles doing this. And what is a pushbike if not a slow moving vehicle?

Of course there is much more than just the above advice. And I have not made any mention of when to use the Secondary position. To see just a fraction of what is in the book and perhaps encourage you to read a copy of Cyclecraft, some more info is provided in this web item, and scroll down on the page at https://road.cc/content/feature/why-dont-cyclists-stick-left-lane-267623

But there is so much more, invaluable, information in Cyclecraft. Tips and information that are not only useful to know but could save your life. It contains, not just pages of information and related illustrations, but chapters on them!
An updated version is still available, see https://www.amazon.co.uk/Cyclecraft-complete-enjoyable-cycling-children/dp/0117037400 and has become the U.K’s standard for cycle training.

As a matter of interest I have just purchased a 2nd hand copy from Amazon for less than £4 inc, postage. John Franklin must have been an ex Copper, because it contains all the information about safer use of our roads, that I learnt when I did advanced motor cycling training based at the Hendon Police College. The book really is a life saving read!