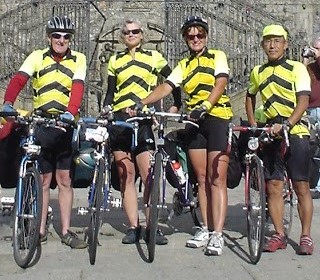 INKED AND GUIDED BY DES AND EWA INTO THE NEW MILLENNIUM!

As a result of November 1999’s AGM, Myself and Ewa have donned the hats (or should it be bike helmets?) of Club captain and Vice Captain. This on a more practical note, means that we now have to organise the Sunday Rides, and come rain or shine, lead the enthusiastic Anerley pack up hill and down dale.
Hopefully, not too much of the up hill bit, or for that matter the rain!

It is a special privilege to be leading the Club on its first cycle ride, into not just a new century, but a new Millennium. That has never been done before!
Now I wonder where the Anerley Club’s first ride of the 20th century went to?  Wherever it was, the conditions would have been much more different than our trek into the 21st century. No tarmaced country lanes then. Even the “main roads” would have been little more than rutted cart tracks. Just a series of winter’s puddles, mud, and more mud!  And just imagine Titsey Hill, with no brakes on the way down, and no gears on the way up!
Who needs nostalgia with a world like that?

BACK TO THE FUTURE

So what have Cap’n and Vice got in store for you as we pedal into the year 2000 and the new Millennium?
Well, the Winter 2000 rides list and other information, is as usual, on the back page of this quarter’s Gazette.  Our first Sunday Ride of the Millenium, on the 2nd of January, is to the Scrambler’s Café at Biggin Hill for the morning tea stop, followed by lunch at the Chequers pub at Crocken Hill.

Last year’s (1999) practise of spreading out the ride leadership resulted in variety. I am sure we all learned a few new routes, even if some of them were bumpy bridle paths! To ensure continued variation (more bridle paths!!!)  leadership of rides on the first Sunday of each month (starting from 6th Feb) will continue to be delegated, preferably to willing volunteers.

We do have a new elevenses stop, Tesco at Hookwood, on the 6th of Feb ride, led by John Dadson. This opens up the opportunity, come the Spring, for more rides heading into Sussex and the villages around St. Leonards and Worth forests.  Being still winter, John’s ride will be shorter, with the lunch stop at The Stepping Stones pub at West Humble.

The mention of Sussex reminds us, that perhaps we should give early warning of John T’s Brighton Ride. Interest and support for this annual pilgrimage (circa July) is now such, that perhaps it should become an “official” club run.
As can be expected of John’s rides, he makes maximum use of quiet and scenic lanes, passing through some quaint Sussex villages, which just happen to have delightful old pubs or some other places for refreshments, by which to quench that summer thirst!

There are a number of options open for this ride, so please let us know who is interested in this extended pedal – and your preferences.

Winter means the gritting of roads, and this sharp grit is a primary cause of punctures. Cold hands are not amenable to fixing punctures out on the road!
Prevention is better than cure, so check that your tyres are in good condition and appropriate for winter use. There are several tyres on the market, specifically reinforced to reduce punctures, by upto a claimed 80%. A good investment at this time of year.
But note that a Kevlar belt is for puncture prevention, where as a Kevlar bead is to retain your tyre on the wheel rim!