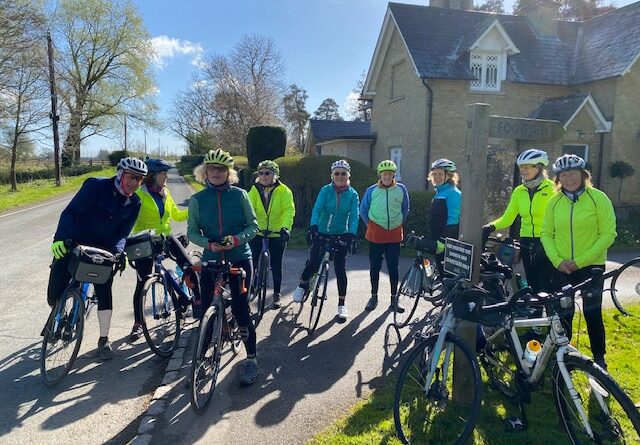 What is an Audax Ride? Audax UK have described it as – not a race, not a tour, not a sportive, not a club run. The claim is that Audax rides offer a unique cycling experience, a challenge to suit the various preferences of a variety of solo or group riders. For examples, the most popular rides are 100km (62 miles), the most numerous are the traditional 200km events, and for the few – multi-day events, the longest of which can go up to 3,200km. Something to challenge every level of fitness.
But whatever the distance, the routes are planned by experienced cyclists who want to show off the best of their local areas. So expect plenty of variety – scenic villages and country lanes – and of course a hill or two!

Audax UK was founded in 1976, but the Audax concept and events date back more than 100 years.

A BIT OF AUDAXING’S HISTORY

The first modern Olympics was held in 1896, which include several track events for cyclists, plus a road race which was 2 laps of the runners’ Marathon course (87km). For some reason this cycling road race was not again repeated at the Olympics until 1912.

However in 1897, the year after the first Olympics, some Italian cyclists organised a challenging cycling event over the cart tracks that were the roads of that time. The emphasis of this challenge was not speed but endurance. This being to complete a 200km course within 14 hours – approximately the time between sun rise and sun set. The riders had to be self supporting, carrying their own food, drink, tools and spare parts. They also had to fix any punctures or other repairs unaided. Subsequently these challenging events became known as “Audax” rides – the Latin word meaning bold, or audacious.

There are now several different organisations which co-operate in running Audax events internationally. There have also been many changes to the rules under which Audax events are run. In the UK it is under the umbrella of Audax UK which has a comprehensive web site https://audax.uk/about-audax/new-to-audax/ detailing all that you will need to know about Audax rides and how to enter them.

In this month’s Gazette you will find a couple of write ups about the 100km and 200km versions of the recent Kennet Valley Audax ridden by several Anerley members. These will give you some idea of what Audaxing is all about.

Not included in the above photo are Karen and Dee Rutter, who being fitter and faster, had the opportunity on their very first Audax, to join up with a more challenging, faster group. This is what Karen had to say:
Yes we both enjoyed it immensely how lucky we were with the weather!! Sadly we didn’t take any photos, we should of done. I’d love to do another Audax Ride, thought it was great fun and btw were there any hills?

Just to reiterate absolutely loved it and look forward to more Audax rides!!

Thanks for encouraging us all to do the Audax yesterday – it was most enjoyable and nice to ride in different countryside, we saw plenty of wildlife en route, including some pheasants, red kites and a deer but I think the deer sighting was before we actually started the ride! And of course, the perfect weather conditions helped enormously.
Unfortunately I didn’t think to take any photos on the way round, think I was too busy trying to keep up with Karen . . .

Karen and I would also like to do some more of these Audax rides, in fact, I think Karen would have liked to have done the 200 km one yesterday?! Not sure I’m ready for a 200 yet, maybe by next year though, who knows?!

These come in a variety of forms, both mental and physical.
The physical is all about cycling fitness, but with a large and varied selection of rides to choose from, you can choose a long or short ride, and of suitable terrain – hilly or not so hilly. The advertised ride details show the altitude gain in metres for each ride.
Terrain, length of ride, and rider’s fitness will determine the rider’s average speed. The norm is to maintain a minimum average of 15 km/h, and to avoid racing, a max of 30 km/h (roughly 10 and 20 mph). Too slow or too fast and riders can be disqualified. Just remember that the clock does not stop when the rider stops for refreshments, punctures or any other reason.

The mental challenge when I did my first Audaxes, was principally navigation and map reading.
Before Sat Nav the riders had to be able to follow a complex route along minor roads and country lanes, using a map. Now with Garmin/Strava/etc, the organisers are expected to provide a GPS file to download – so much easier to follow, but not as much fun, or testing, as relying on map reading skills!