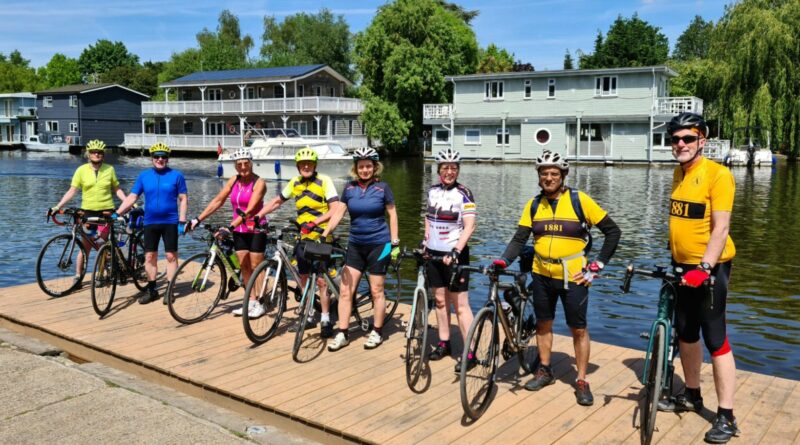 It is always nice to visit new tea stops and explore new routes to get there. So when Tom Vaz suggested a ride out to visit the “8 On The River, Boat Club” at Molesey, it seemed like a good idea. It seemed like an even better idea after I mentioned this to Shak who had been there before. He said that the route was likely to be via the Wandle Trail, Richmond Park and them along the riverside Thames Path. We had just had the warmest and sunniest few day of the year, so a bit of Gravel biking really appealed!

Unfortunately the fickle English weather put paid to that – for the 2 days before the intended Sunday Ride we had tropical rain storms, so Tom decided to play it safe and stick to good old tarmac. But never the less, I was interested to see what new bits of our road system I could learn from Tom’s choice of route.
We started off by going out via Epsom and Malden Rushett, heading out towards Oxshott. Here, when we came to the posh private housing developments which are part of the Crown Estates, Tom took the first right turn into a private road, shown below.

This bit was new to me, and an excellent cut thru to join the main A244 which leads upto the the very busy A3. Unfortunately it was a problem getting out onto the A244 due to a non stop stream of heavy traffic. We just had to force our way out and hope for the best, as we crossed over the A road to proceeded into the further expanse of the Crown Estate developments to join the long Fair Mile. This took us eventually onto the old Portsmouth Rd between Cobham to Esher. It just so happened that the previous weekend I had taken this same route, to a new to me, tea room at the West End cricket club-house on part of Esher Common.

And what a delight it was! A traditional English village with cricket on it’s Green, see https://anerleybc.org/tea-rooms-lost-one-gained-one/.
But after that, the rest of Tom’s route to the rowers’ club-house was all new to me. The highlights being Esher Green in the town centre, with the Queen Victoria Jubilee Memorial and statue of Britannia above. And the adjacent Memorial Fountain. Also, a cast iron pump donated in the 1860s by H.R.H Le Comte de Paris.

After this historic Green, we passed by Sandown Race Course, before turning off the main road to follow a railway line and bridle way which took us over the River Mole.

Then the route gets a bit more complicated, so I have since the ride, plotted the route to help show how we got to river side at Moseley.

Map of route (above). Bottom right as we come to the race course on our right below the railway line. The route soon turns left to follow railway line. The short green line here is the bridleway over the River Mole where we paused for group photo on bridge. We then passed the 2 huge water reservoirs, the holding banks of which tower above our road below them!
The route then continues to our journey’s end at the 8 On the River Boat Club, as shown below.

Above, you can just see the corner of the second of the 2 reservoirs, centre left, where our route follows 90 degree bend. The next 90 degree bend (at blue No.9) is into Pemberton Rd – easy to remember because Victoria Pemberton was one of our 2012 Olympic star cyclists!

So a most enjoyable ride to our Thames side tea stop. Even the main A roads that we used at times, were not busy. And many interesting things to see along the route, of which I have only mentioned a few.

After a long and restful tea stop enjoying the sunshine, just one last photo before we set off on our return journey.

From the rowing club we headed down stream on the Thames Path, it is only a few hundred yards to the main road bridge by Hampton Court Palace. Here we took a right and then another right onto the B3379 (Creek Rd) which I recognised, because one of my sons once lived here in an apartment block which backed onto the River Mole. From here on, I knew all the way home. The B3379 meets the old Portsmouth Rd (A307) which took us back to Esher and on towards Cobham. But we turned off along Fair Mile to Stoke D’Abernon, etc, etc. Below, our Ride Leader, Tom V takes some minor back roads into Ashstead.

And through the grounds of the City of London’s Freemen’s School where we stopped for a last photo of the 8 on the bridge over what was once a stream.

But time was flying by as evidence by the sun dial at the Head Master’s House!

And Shak took one last photo, as we passed the pond at Walton on the Hill. A horse cools it’s hot hooves, whilst the passenger relaxes with a book to read!

So thanks to Tom V for a ride with a difference, and to our unseen photographer for recording our travellers’ tale.