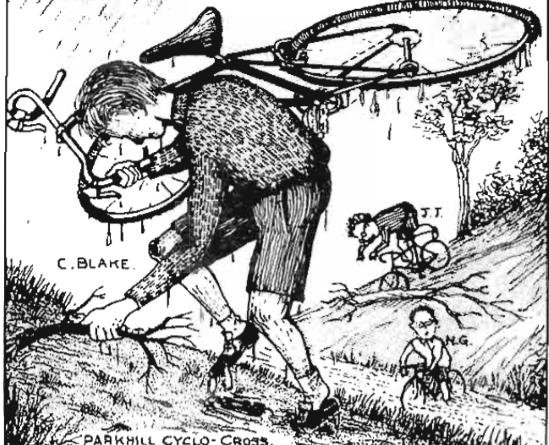 Was Denise the first Anerley Gravel biker or was she just a much later follower of fashion?

The Anerley Bicycle Club was founded by the adventurous boys of Dulwich College who decided to explore the world around then on the fashionable “velocipedes” as they were first called. In the absence of mobile phones, the only pictorial evidence we have, is this as it appears in our Club history.

And as G.H Smith, who wrote the history and rode just such a machine, penned ” The roads over which these early machines were so laboriously propelled, were either sandy gravel or chalk. In summer the dusty roads became terribly cut up and loose. Indeed we have known the Brighton road to be impassable for cycles beyond Purley, from this cause! “

But things did improve, well at least the bikes did, even if not the roads!
We have a copy of G.H’s. cycling diary from 1891 to 1896. He rarely notes the bikes that he was riding, but more important to cyclists of those times, was the weather and hence the state of the roads!

On 5 May 1891 he notes: ” Left Edinburgh after dinner rode to South Queensferry , over Forth Bridge . . . (to end ride at) . . . Perth. No rain, roads fair”
The next day: ” On to Dunkeld where the the Highlands begin, Pitlochry, Blair Athol, Dalwhinnie Inn. Very wild country. Road fair, rough in parts. Dull day. 62 miles”

In those far off days, it was not only the Highland roads, but roads in general, that were cart tracks. The audacious Anerley cyclists did not have Garmin to guide them, they probably didn’t even have maps!

On the 8th May, his fourth day on he rode, his notes (which I have abbreviated) include: “Go West. Cross by ferry to south side of Loch Ness. Went off proper road by Foyers . . . Fort Augustus, Invergarry, go wrong again here . . . to Spean Bridge Inn. Fine day, very hard and rough roads. 63 miles.

And so it goes on each day – “Went 3 miles out of my way . . . Grand day but roads very rough” – and on his return leg to Glasgow after Dalmally – “ Very stiff rough bit 12 miles long”

Unfortunately we have no illustrations of G.H’s travels on his tour of the Highlands. The next, and only illustration of his extensive travels, is this which also appears in our Club history. Note his latest “gravel” bike!

But times change and fashions changed, as did the bikes. So now fast forward to the 1950s and another active form of riding the rough stuff!

The rider coming down the hill, middle right, marked J.J was our much revered Jacko, or John Jackson. And just like G.H of old, Jacko was also adept at riding trikes!

But this little travel back in time, was not my idea, but prompted by Tom Tom Moody who sent me a item about the real history of gravel bikes. I found it very interesting, I hope you do, too. See