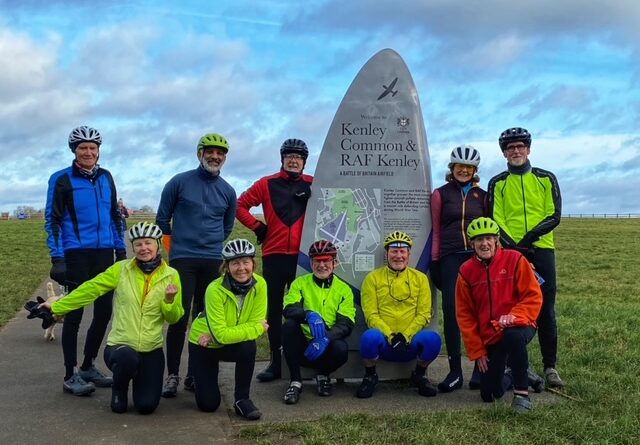 Like my Club Ride on the 1st of January, the 1st of February was a bright and sunny morning with a bit of warmth from the sun – a nice change after the bitter cold of last few of my January forays into our local countryside – too cold to go too far of late!

Much to my surprise, the Ride Register showed 3 separate rides on this sunny morning. Ian was meeting his group at Farthing Downs to head off to Horne Golf Club. But both Tom Vaz and I were starting our rides at Shurgard at 10.00. Tom was heading out to Ripley – a 50 miler. My lot, off to Priory Park Farm at Nutfield, a more conservative 35 miles or thereabouts.

Between us, Tom and I had a total of 17 to lead out with a massed start at the stroke of 10.00! But we soon split up – Tom taking the low road towards Coulsdon, whilst I led the mountain goats up the high road, starting with the steep climb of Foxley Hill to our first stop, to meet Jo Smith at Kenley Aerodrome – and for a group photo. What a handsome bunch!

Kenley was in the thick of the Battle of Britain, as were Croydon Airport and Biggin Hill. I was born at Purley Hospital in Oct 1939, and grew up with the sound and sight of war planes in the skies above. For those interested in local history of that period, this is very interesting as it is about a daring bombing raid by the Germans, involving both Kenley and Croydon air fields see https://museumofcroydon.com/blogs/croydon-airport-1

This photo is of the raid by the German bombers at the very beginning of the Battle of Britain. Tasked to attack Kenley Aerodrome, but due to a navigational error, instead they attacked Croydon Airport. My mother, like those above, watched the melee of British fighters and the German attackers in the sky above. I was in my cot and slept through all the action!

After these flash backs to my childhood, it was then time for a bit of action from us. So we pedalled off and down the steep slope of the North Downs ridge, and up the hill to the top of the Green Sand ridge at Bletchingly. Here, on the A25 we were forced to take a long detour due to road closures in an extensive area. The only route available to us, was to go straight to Priory Park Farm after a ride of only about 10 miles!

The answer was just to carry on past our intended tea stop, down another steep hill, which eventually took us past Redhill Aerodrome – another war time airfield! This gave me the opportunity to take Peter, our new Club Captain and his new Gravel bike, onto a short diversion to join Route 21 and an extended bit of a gravel trackway between fields of sheep, etc. A very pleasant diversion!

To save me trying to describe the route I took, this is my favourite site for plotting routes – Cycle Travel, below ( https://cycle.travel/ ). You can see the main railway line on the left of this map section, and to it’s right, the red dots are Rt 21. At bottom of map at Salfords, we crossed over Honeycrock Lane to continuing on Rt 21. A hundred yards on is a sports club ground with a club house and it’s tearoom. These facilities are now also shared by Redhill Cycling Club – you can’t miss their big sign!

Continuing south (off the map), at the next X rd we turned to our left (east) still on Rt 21 as far as New House Lane. Here we continued on an extended circle, following the blue dots of a local cycle route. This took us back (north) to join Axes Lane (see bottom left of the above map), and followed the blue dotted route back to Kings Mill lane, to return past Redhill aerodrome. It might sound complicated but in reality it was a fairly simple circle!

Just to add a bit of variation and to complete a figure of 8, we returned back to Priory Park Farm via Hogs Trough Lane. And this is us feeding our faces, like hogs at the trough, with a well deserved cuppa and enjoyable, social chat!

A great crowd, great weather, a great tea stop, all in all, a great day out!
And the Strava stats provided by Bob Bray, were 32 miles with 1,918 feet of altitude climbed. Just short of 2.000 feet – not bad for such a short ride!

And a P.S. Mention above of Croydon Airport reminds me of a bit of Anerley B.C’s own history!

Tom Vaz has popularised train assisted bike rides. But as shown above, in 1935 Anerley B.C organised what was probably the first ever aeroplane assisted bike ride!
Our members flew from Croydon Airport to an airfield at Hatfield to go for a bike ride with the North Road C.C and some of the North Road C.C flew to Croydon Airport to go for a ride with Anerley B.C.

At this time (1935) Croydon was the London Airport – Heathrow did not open until post WWII, in 1946.
The de Havilland Rapide, shown above came into service at Croydon Airport in 1934. The airfield at Hatfield was almost certainly that of de Havilland, whose aircraft factory was at Hatfield, and in 1935 might already have been designing and/or building aircraft for the real possibility of a war with Germany.
Some interesting, historic photos of Croydon Airport and it’s place in world history (it closed in 1959) can be seen here https://www.mylondon.news/news/nostalgia/gallery/astonishing-pictures-show-croydons-lost-22988099
Well worth a look!