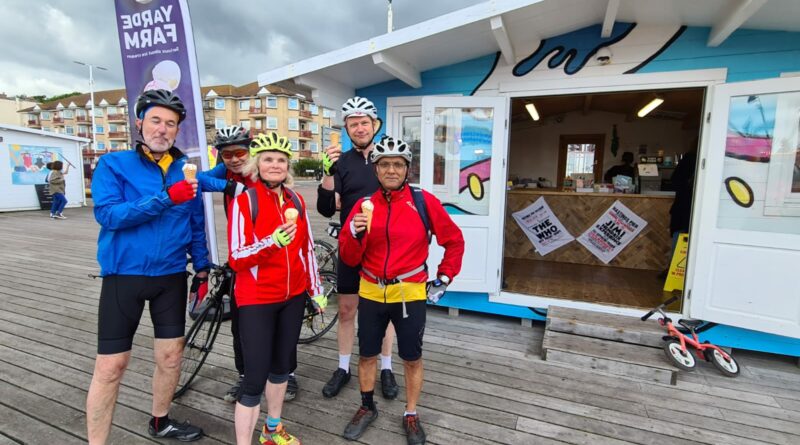 Avid readers of the Gazette (there must be some – c’mon own up!) may remember my piece in last July’s edition about a ride to Hastings.  It was particularly special for me as it was my first 100+ miles ride.  Also memorable for Karen’s bonking episode (ooo matron!).

So when Tom Vaz posted a ride to Hastings on the register I was keen to do a reprise.  BUT this was only 5 weeks after Tom suffered a heart attack part way through a planned 100 mile circular ride (see May’s edition).  The doctor’s advice was “nothing strenuous for a month while your body gets used to the stent”.

Ah well – the plan was only 80 miles and I knew Carlos would be on hand again to provide on the spot medical advice.  What could possibly go wrong?

First major panic happened within 5 minutes of leaving home.  I was half way to Shurgard when I looked down and realised I’d left my water bottles at home.  Aaargh!  I had to go back as I had suffered from dehydration on a recent ride and this was going to be a long day.  I live at the top of a hill so that meant a nice burst of 18% climbing before I’d even warmed up.  I arrived a little stressed but only 10 minutes late.  First world problems.

Shak was similarly stressed but that was due to concern about whether we would get home in time for the Champions League final.

Seven of us set off – Tom, Carlos, Karen, Julie, Shak, Ricky and me.  We headed east through Warlingham and along Clarks Lane but then veered left before the descent.  Tom’s voiceover was “we’re going along Chestnut Avenue at it’s been resurfaced so Karen won’t need to worry about her bike…”.  It was a lovely route and I found myself wondering why it was called Chestnut Avenue until I noticed the trees…then the road changed from quite smooth to more like the moon’s surface.  Not a problem.  Always a little surprise on one of Tom’s rides.

When we got to the end, at the junction with the imaginatively named Main Road, Karen was brushing off her tyres.  I didn’t take much notice as Karen takes great care of her road bike and hates it getting messed up.  A mile and a half on and when we came to the next turn I waited to check Karen was coming.  Carlos turned up but no Karen.

I tried to call but no reception.  So started to head back.  Knowing that the rest of the group other than Carlos had kept going, I got cold feet and turned around after what felt like an age but was probably only 5 minutes.  When I re-joined Carlos, the rest of the group also returned and we got the message that Karen had a broken spoke and so had had to head home.  A real shame as Karen loves those long rides.

We pushed on, through Knockholt, down Star Hill and on to Otford, then Seal, Plaxtol and Yalding before arriving at our lunch stop on Teapot Island.  We had done 38 miles by now so I was more than ready for my eggs on toast and starter of bread pudding.

This was my first time to the “island” so enquired why it is called Teapot Island.  Someone said it’s because the shape of the land looks like a teapot but when I loaded google maps it looked more like Aladdin’s lamp if anything.  Now doing some research it seems it is just the name of the business which is home to the biggest collection of teapots in England (over 8,200).  Normally you can see the collection but it was closed on the day of our visit – Shak was mildly disappointed but at least it meant no time lost in his quest to get home for the footie.

40 miles of relatively flat riding followed so at times we built up a good speed and rhythm.  Very different terrain from our familiar Surrey hills.  Marden, Staplehurst, Frittenden, Tenterden and Appledore flew by before we arrived at Rye.  On a fine Saturday afternoon, the town was full of visitors but we managed to find a café with room for us – the Cornish Bakery – and so we topped up our caffeine and calories ready for the big one, Battery Hill.

When you look at the elevation profile of the ride to Hastings it is flat for pretty much the last half of the ride except for this prominent spike just before the end – that’s Battery Hill.  Last year I had trudged up most of it on foot so I was interested to see if I could conquer it after a year of experience with the club.

Before that we had the pleasure of Rye Harbour Nature Reserve.  This is a very special place and I recommend it to anyone who has not been there – cycling or walking it’s a treat.

Onto Battery Hill and I am pleased to report that I managed to get to the top without stopping.  I have watched other more experienced members and worked out that the best way for me to get up tough hills is to go as slow as possible to the point of almost stopping.  That puts the least strain on my heart and lungs.  I used to try to maintain a relatively fast cadence which worked on shorter climbs but meant that I just got burnt out before the end of any longer steeper hills!

What goes up must come down and so we cruised down into Hastings.  The 1723 train had been cancelled so we had some time to kill which meant ice creams on the pier and a welcome chance to catch our breath and enjoy the scenery.

The train back from Hastings is a bit of a drag as it goes via Eastbourne but time passed quickly and we were soon heading home from East Croydon as dusk fell.

I finished the day picturing Shak tucked up in bed watching the football, and probably nodding off…