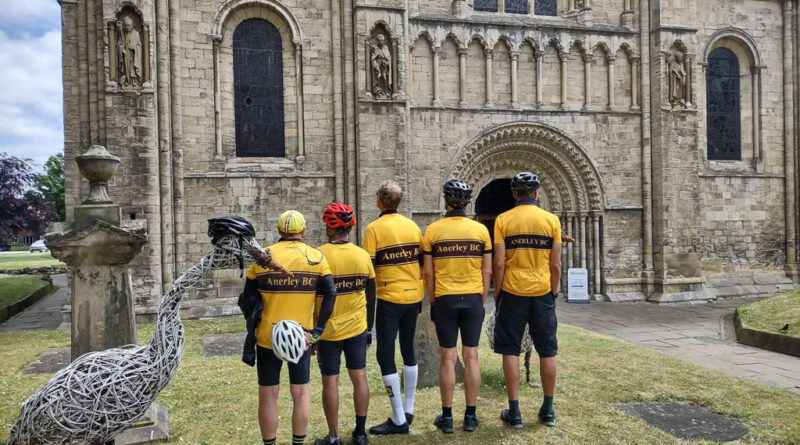 On Sunday we did our own ride to Tadcaster, led by Tim. It was about 40 miles.

Cunningly, the ladies went off early to enjoy a more leisurely ride, Nick got a train to somewhere else to catch another one of those BCQ points for his collection and after a quick coffee in Rowntree Park, the rest of the gents set off. John Eden had a slab of Rocky Road Cake that was 80% sugar, he could only eat about half of it, not good for his diabetes, Tim promised us a fast ride to Selby most of the way on an old converted railway track.

Selby, previously famous for the Selby Coalfield where was surprisingly pleasand also pleasant was the surprise that all three groups met up at the same time for another coffee. Members of another cycling club were there the Calder Clarion. We ignored them being unsure which side of the Clarion fracture they belonged to.

On route to Tadcaster we stopped at a gateway to a wheat field to watch a By-Plane doing aerial stunts with someone standing on the wing. As the plane turned towards us John said, “Let’s run into this cornfield, this is like the film ‘North by Northwest’ with Cary Grant”, but this remark went over the heads of the others, unlike the plane which did not – it turned around.

When we returned to York Racecourse we noted that the portaloos and showers were starting to disappear, and we were told the on site caterers would not be staying for the evening! So we all walked, except John, (why did we walk?) into York centre and ate at the Wetherspoons pub once again.

We endured yet another cold night before the final packing in the morning. Much hilarity was had as we watched Fiona and Linda trying to put down one of those infamous “pop up” tents. After 10 minutes of laughing at the antics, Tom V stepped in and used his scout master skills to put the poor thing down in 20 seconds. If you are going to borrow one of those things, practice before people start watching you!

John Eden fortified himself at the Wetherspoon pub yet again before his return trip to London, Linda, Fiona and Nick went off elsewhere while the rest of us set off on an adventure camp around the Yorkshire Dales. Led by our faithful and very great leader – Tim.