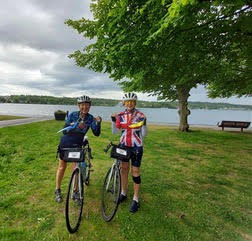 ​
On 9th June Jo Smith & Denise set off for Sweden to ride in 3 events which make up the annual Vätternrundan cycle challenge. They are sportif type rides around Lake Vättern, southern Sweden, which is about 2 hours drive from Stockholm. The 3 events happen over 2 weekends so we were away for 12 days.
Tjejvättern 100 km (on the Saturday), ladies only event.

Vätternrundan 315 km  (the following Saturday) is the world’s largest recreational cycle ride with close to 23,000 entries per year.  Here’s how the website describes it …

“ Vätternrundan (pronounced vet-turn-rund-an) started in 1966 with 300 riders and has now become the largest recreational bicycle ride in the world. The 315kms course follows the shoreline of the beautiful Lake Vättern and early starters can see the sun set and rise over the lake during the ride.
Vätternrundan starts and finishes in Motala, Sweden, whose population swells to three times its size during the cycling events. The cyclists, their friends and relatives and the thousands of bicycles create a festival atmosphere, making the bike ride that extra special. Many cyclists return year after year and over 50 nations are represented”

Jo has friends who live in Sweden so she’s taken part in these events many times, each time saying “never again” after completing the 315 km, but somehow always going back for more! A big birthday in 2021 prompted her to do it “one more time “ and she managed to sucker Denise in too. Then Covid scuppered the plans until this year when we finally got to go. With bikes packed (and a bit of last minute technical advice, via WhatsApp, from Vince), we flew from Heathrow to Stockholm and were picked up by Jo’s friend and taken to their home in Västeras, a 1.5hr drive. Time to unpack and reassemble the bikes

Next day we decamped to the town of Motala at Lake Vättern, a further 2 hour drive where we were able to sign in and collect our entry bibs etc. This was the pleasant weekend, 100 km first day and 150 km the next. Fabulous road surfaces, good cycling weather, gorgeous views of the lake and superb organisation & safety. What more could we want !

Below:
1 The “depots” are the food, toilet, massage & mechanics stops found at every 30 km
2 The ladies at the start of Tjejvättern
3 Misty view of Lake Vättern
4 The finish line of the 150 km
5 First medals in the bag

You’ll notice Jo’s striking Union Jack jersey, she wore this on the 150 km which got the attention of the roving reporter on the finish line. Next thing she was being interviewed and broadcasted on local TV. What a hero ! By chance this happened again on the finish of the 315 km, a different reporter and this time we both got our moment of glory but I was amazed we could still speak!

On the Monday morning we drove back to Jo’s friends house in Vasterass and did a few shortish rides with lovely coffee stops to keep our legs moving. The following Friday we returned to Lake Vättern ready for the 315 km next morning. Our start time was 04.36 so we set our alarms for 03.15 and woke to pouring rain which was expected to stay around until about 11.00. The wind was howling too. We rode to the start and got into our start pens ready to be led out of town by a motorbike escort. Everything went like clockwork due to the fabulous organisation and we were soon on our way with a few encouraging cheers by locals brave enough to be up at silly o’clock. Obviously the start times were staggered and the first wave had set off at midnight before us. There is an obligation to complete the ride by midnight Saturday. Jo had experienced various different start times but thought 04.30 ish would be the best choice for us. Who was I to disagree with such a seasoned rider?

Did I mention the wind ? Full on head wind at that and for the first 100 miles! It wasn’t long before we realised it was going to be a tough ride and we tried (unsuccessfully) to tuck in behind groups. I had a poor start while Jo, on the other hand, seemed to fly. Then I picked up and she dropped back a bit and this pretty much set the scene for the rest of the ride. Good parts and bad for both of us but I think Jo had the upper hand on this ride, whereas she thought I did on the 150 km ride. We agreed to pull in at every Depot and make a quick stop to grab a snack of brioche bun and half a banana with a cup of warm berry juice. When we finished we said we never want to see a banana again. Our lunch stop was a bit different in that we stopped for half an hour and ate lasagna (well I did but Jo is  veggie and they’d run out). In addition we carried muesli bars, nuts and jelly babies which added a bit of variety. We did feel we needed to eat quite a lot.

After the first 100 miles the wind and rain stopped and the scenery got a bit more interesting as we passed through more villages and rode closer to the lake which afforded some very nice views, only another 100 miles to go, I tried not to think about it! By now we started to see some of the pro teams wizz by, it was scary how fast they were while we just kept plodding on. But plod on we did and noticed lots of people queuing at the depots for the rescue coaches to take them home as they couldn’t make it. 75 more miles and we were dreaming of crawling into bed having decided to skip dinner, shower and anything else, not long now to hang on. Then we seemed to get our second wind and I’ve no idea how that came about but our pace picked up and we were positively chirpy as the end started to become reality. There was a time that we thought we may not reach the finish before the cut off time of midnight but we crossed the line at 22.30 and it was still daylight. The run up to the finish was lined with lanterns, the music pumped out and the locals cheered us in, we’d made it and just in time to be interviewed again!

We were buzzing and happy to get our medals then mooch around the cycling village before riding back to our accommodation, having some soup, shower and bed. 200 miles, and a medal to prove it. Jo got a special upgraded medal as this was the fifth time she’d ridden the 315 km. Congratulations Jo, and I’ve got a feeling it wont be her last!

Next morning we woke and didn’t feel any different to usual which must prove that we were relatively fit, after breakfast we drove back to Vasteras and had a celebratory dinner of a traditional Smorgastorte followed by a Princesstorte for desert.

The Smorgasstorte  is a multi layer sandwich (ours had prawns, egg, ham, salad etc) cut like a big cake and covered with a light creamy sort of topping. It was delicious.

The Princesstorte was a similarly layered concoction but this time instead of bread it was sponge cake filled with fruit and cream and covered with a light version of marzipan. Sounds dodgy but again it was delicious but we won’t mention the calories!

We flew home from Stockholm where we counted at least a dozen other bike bags being checked in on our flight to Heathrow. The airport was horrendously busy and it took 1.45 hours to even reach the check in desk. This gave us plenty of time to talk to other  cyclists who’d clearly taken part in the Vätternrundan too.  I think we impressed two guys from Cambridge because we’d done all 3 events whereas they’d flown out just for the second weekend to do the big one. We couldn’t help jiggle all 3 medals to keep reminding them! The plus side of the lengthy queuing time is that we got invited to ride to Cambridge, have a short ride with them then follow an Audax route to the coast which is now organised for September.

We finally got on board our British Airways B787 Dreamliner (one of their new wide bodied jets) and happily accepted a nice upgrade into First Class so we certainly flew home in style, sipping champagne,  after a terrific experience in Sweden. A word of warning, watch out in case Jo invites you to join her next time!

And a P.S. Sweden – barely a pot hole in sight