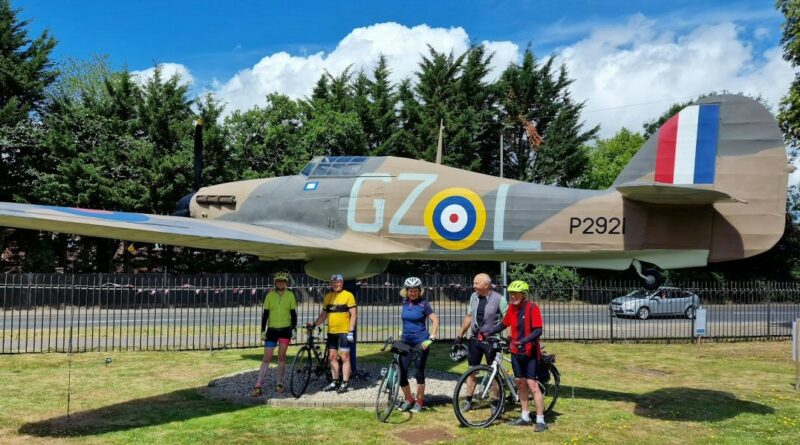 What a pleasure it has been, cycling in the sunshine of the past couple of weeks. A couple of Sundays back, we set off on a short, easy ride to High Elms Golf Club. At least it had been easy until the steep climb up past the old Keston parish church! However, struggling to keep turning the pedals over, it does give us time to admire this ancient church.

You would not now realise that it got damaged by German bombs in the last war. But then, being so close to the WWII, Biggin Hill Aerodrome, I suppose that was to be expected!

So that was our next stop – the aerodrome! Some one in our club had told me, that there was a new museum to add to the two WWII fighter planes reminding us, of how the “Few,” at great cost had won the Battle of Britain. Fortunately we had Shak with us who recorded this important bit of our national history.

Although now Biggin Hill is a busy civil aerodrome, it was still a military one for many years after WWII. It’s annual high light was the Battle of Britain Memorial Day, which I can remember visiting for the first time, in 1959 when I was then a Biker – not a cyclist but a motor biker!
This was at the height of the Cold War, when we really did fear a nuclear holocaust. These displays of our military might were no doubt to boost our moral. But whatever the reasons – they were certainly exciting for us teenagers, who were expecting to be doing our National Service for Queen and country!

Off course then, it was not fighter planes that were the show pieces, but the V bombers, our nuclear deterrent, and what a show they put on! The star being the huge Vickers Valiant delta. It just oozed power!

It came over Biggin Hill in a sl-o-o-w, banked turn to show off it’s unique delta shape. Then as shown in the photo above, came in slowly over the runway as if to land.
Suddenly! With an ear shattering ROAR and a cloud of black smoke the pilot and co would open the throttles to ignite the four after burners. The Vulcan would leap forward, and in a couple of seconds, this huge aircraft would stand on its tail and climb vertically to disappear into the clouds. You could not hear the crowds “Wow!” because the thunderous noise had left us all temporarily deaf.

It was 33 years later, in May 1982, that the aging Vulcan bombers and their young air crews, made world headlines when against all odds, they successfully flew out from the UK to carry out bombing raids in the Falklands War.

The even “Fewer” who won the Battle for Britain!