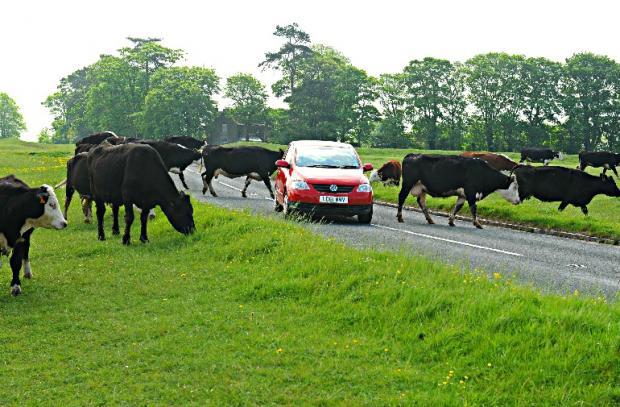 On our ride into Tetbury we had cycled through the ancient manor of Chevenage, which back in the time of King Edward the Confessor had belonged to Princess Coda, but this was not the only royal connection in this area. We had stopped at Cafe 53 for our lunch, at 53 Long Street, but a few doors along the other side of the road at number 10 was this royally owned gift shop.

For those avid watchers of the TV programme, The Crown, Highgrove House will no doubt feature in the series. Highgrove House is only a 15 minute bike ride, south of Tetbury, However we were, instead, heading north west on our return route to Stroud.
But Anerley riders might be interested to know about a local connection (for us) with Prince Charles and Highgrove House. This connection being Chevening House, not to be confused with Chevenage House!

And the connection with Prince Charles?
Highgrove House was purchased by the Duchy of Cornwall in 1980, And Prince Charles, also being the Duke of Cornwall, was appointed as a tenant for life of Highgrove by the Duchy. This no doubt, being mindful of his upcoming marriage to Diana in 1981. Prior to this Prince Charles had been the tenant of Chevening House on the Pilgrims Way.
Our Chevening House in Kent, also has an interesting history, a bit of which can be seen at https://anerleybc.org/a-tuesday-ride-to-historic-houses/

But time was flying by, time to get cycling again!
So we left Tetbury on the B4014, up a 3 mile gentle climb, towards Avening. But had we forked right instead of left out of Tetbury, we would have been faced with a 25% climb up Gumstool Hill!
This hill has long been a real challenge. Not of course for cyclists as the bicycle had not yet been invented, but for drovers, herding their flocks of sheep into this market town. From at least the 17th century the young and fit drovers would challenge each other by racing up and down the hill carrying a heavy (60lb) woolsack. No doubt, lots of free ale in the local hostelry at the foot of the hill for the race winner!

But we were probably at Avening by the time it took the winning drover to enjoy his first tankard of Tetbury’s finest ale. Our pleasure was the long freewheel through Avening and into the wooded valley of the Nailworth River.

The river valley was a very scenic ride following the B4014, with Hazel Wood on our left and Gatcombe Wood on our right. Between Gatcombe Wood and our B road, was a steep drop into the Nailsworth River which opened out into the wide expanse of Gatcombe Water. This in times past, was an important industrial site, busy with many mills making the valuable Stroud Broad Cloth for world wide customers.

We were on our way to Minchinhampton where a previous owner of the Manor of Minchinhampton, had made his fortune from the these mills along the Nailsworth River. When he decided to build a new grand house, it was aptly named after it’s location, as Gatcombe Park, now of course world famous, being the royal residence and home of Anne, the Princess Royal.
Gatcombe Park was a wedding gift from Queen Elizabeth II to her daughter, Princess Ann, on her marriage to Captain Mark Phillips in 1976. It remains the home of the Princess Anne, where she continues to indulge in her love of horse riding and eventing.

Coming from Avening, along the wooded B 4014, at bottom of the map below, at the far left on this road, there is a symbol of a beer tankard. This marks the Weighbridge Inn, being our marker to take a right turn onto a little bridge over the river and the long steep climb up to Minchinhampton.

The Weighbridge Inn was in days gone by, both the local weighbridge and an inn. Here the raw materials, cart loads of wool, coal, etc, being used at the mills, was weighed and costed. Similarly, the finished cloth going out. In later years the adjacent trackway became a toll road and tolls were collected here – 4d for a horse drawn carriage, but only 1d for a horse. Livestock was charged at 10d per score (20) for cattle, but only 3d per score of pigs. It would have been worth a visit to see the memorabilia of times past now on display – but closed at this time due to the covid restrictions.

After a long and steep climb we eventually came to some cottages and a convenient gap between the trees of the wooded slope, so we stopped for a breather and to admire the view

Nearly but not quite! Perhaps we were tired after a long day’s ride, but that last half mile into the village seemed to me to be the hardest climb of the day. How pleased I was to arrive at the crossroads to see and savour coffee and cake at . . . . .

We had started the day with the long climb up onto Selsey Common, traversed by the 5,000 year old trackway now known as the Cotswold Way. And we were nearing the end of our ride across another ancient ridgeway. But first, we left the welcoming Kitchen via the old village market square, to join the age old way to take us back to Stroud, passing by . . . . . .

The road to Stroud took us over the extensive area of Minchinhampton Common, where in 1910 was excavated one of the worlds oldest tyrannosaurs, a Proceratosaurus. This is a few million years older than the Hetty Tump long barrow near Utley, that we had seem earlier that morning. But of more recent times (relatively) are the earthworks on the common, known as the Bulwarks. These are believed to be the remains of the ancient fortifications used by the iron age tribesmen of Gloucestershire, making their last stand against a massive invasion by the Romans. Were the memories of those ancient Britons, who fell under the Roman onslaught, perhaps also remembered at the village War Memorial? But now all is peace and quiet on the common, except for the invasions by cattle!

What a great day this had been – sunshine and blue sky, so different from the wind and rain of the previous stormy day. So later back at our hotel we all met up to decide where to go for our evening meal at Stroud. This was our last night as tomorrow we were heading back to Purley. To our delight, and to toast another successful Anerley mini tour, Susan produced a bottle of fine wine from the depths of her suit case. Three cheers!
Des