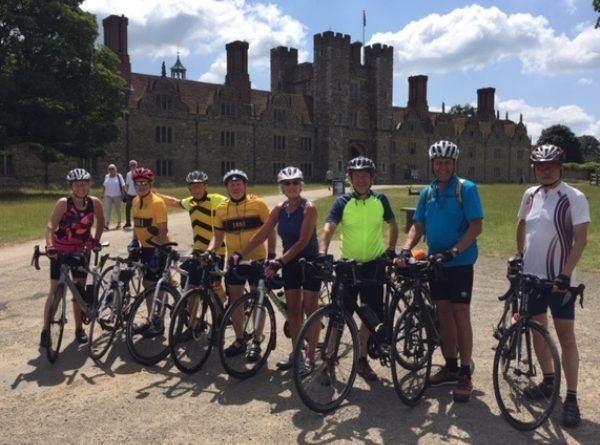 It was Sue D’s first time out as Leader of a Tuesday Ride and her choice of venue for the tea stop could not have been better – Knole House – set on the top of the Green Sand ridge amid the woodlands of the Weald of Kent. Perfect for this sunny morning!

Knole House is set in 1,000 acres of deer park, so normally the herd is munching the grass away in the distance, but on this occasion we had a welcoming party awaiting us outside the tea room!

But first we had to get there.
Sue took the high road. First the climb up Botley Hill and then the route along the top of the North Downs ridge, via Knockholt etc. Whilst I took my group along the low road along the Pilgrims Way, which took us close by to another historic stately home – Chevening House – also set in a huge parkland. The history of this stately home goes back to about the 11th century and from at least the mid 16th century was the home of the Viscounts Stanhope. The home and park is not open to the public, so the nearest that we could get was to the main gate.

Currently, the present and previous residents are the subject of a major battle of which you will all be familiar with – Brexit!

Following the death of the last Viscount Stanhope, Chevening Place has been used as the official residence of the Foreign Secretaries. The current Foreign Secretary being Jeremy Hunt, and the previous one Boris Johnson, one of whom will be our next Prime Minister from next week.

Whilst we could not get in to see the house, we did pay a visit to the lovely old parish church beside the entrance to the park.

The church is one of 69 churches dedicated to St Botolph who is the patron saint of pilgrims making their way to Canterbury, and hence it’s location on what was the original Pilgrims Way. The church has a plaque showing this, and was put in place to mark the year 2,000.

Of course this ancient church has much to tell of it’s long history, and that of the Lords of the Manor of Chevening and their families. For example in the Chantry are the tombs and alabaster effigies of John Lennard (died 1590) and another of his wife Elizabeth (1585), who were the Lord and Lady before the Stanhopes.

However the most poignant monument is the white marble effigy of Lady Frederica Stanhope who died in childbirth in 1823.

After our brief look at the memorials of times past, we continued on our way thru the Chipstead (in Kent), across the A25 at Bessels Green and the ever steepening climb up the hill to Sevenoaks and Knole Park. We even managed to get there before Sue’s group, However we did cheat by taking a shorter route, some 5 miles less.

The homeward journey was much the same as that taken by Sue. However although we started back first we were soon passed by Sue’s group. My fault because I lost 3 of my group at a cross roads by taking a right turn following the signpost towards Ide Hill, before all were in sight. We had to go back to the crossroads where the unfortunates had carried straight on down the very steep Hubbards Hill to the village of Sevenoaks Weald, A very exhilarating downhill only to have to climb back up to join the rest of us. I don’t think I was very popular with these members of my group!

Des, and a thank you to Jo Rifat and Denise for their roles as club photographers.