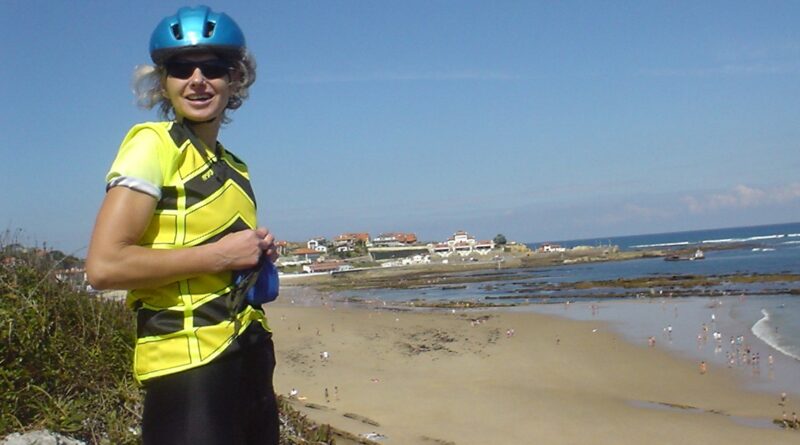 It was the winter of 2005 when Ewa had the idea of cycling across northern Spain, following the Camino de Santiago de Compostela. And it did seem like good idea at the time!  The Camino has been an important route of Christian pilgrimage since about the 9th century.  In recent times the cathedral authorities have granted pilgrim status to cyclists.  Previously, a pilgrim was either required to walk the Camino, or ride on horse or donkey.  Having persuaded me to don sack cloth and ashes, Ewa could not manage to get me on a donkey!

But how could a Pilgrim’s Tale be told without a cast of characters?  So off we set, a Polish teacher, a Polish doctor, a Japanese Iron Man, and me of Chaucerian, Anglo Saxon stock.  As you might imagine it was not just the Spanish language that was a problem! But Summertime came and we made a flying start on our long and winding path – a camino in Spanish.

We arrived at Santander in late afternoon with an anticipated, short 25k to an overnight stop at Santillana del Mar.  However, departure from the airport was delayed by a very large thorn, imported by Ewa.  Then, following a much welcome stop for cerveza and tortilla, Ewa managed it again.  And again.  Two more punctures. So Ewa became quite an expert puncture fixer!

As darkness fell, we had to cut our journey short and find somewhere to stay. Knocking on doors we were directed to try the elusive house of Maria – Casa Maria.  Or was it the yellow house –  Casa amarilla?  I still can’t understand spoken Spanish. Or Polish or Japanese either!

Day 2.  The Sound of Music – The Hills are around!

The next sunny morning, a short pedal took us first to explore the enchanting medieval village of Santillana, and then Comillas, a further 16k along the coast.  Here we stopped for our first lunch time picnic by the sea

Comillas is famous for it’s magnificent villas and buildings, designed by the world renowned architect Antoni Gaudi, and financed by the wealth brought back from Spain’s empire in the Americas. Also, it’s back drop of the Cordillera Cantabria.  So, beautiful architecture, beautiful coast and, beautiful mountains.

We were making slow progress and behind schedule, with still 55k to the 2nd night’s stop.  First a wide river crossing, at San Vicente de la Barquera, in a deep valley (that meant a steep down and a steep up, of which there were many!) But this river crossing was a little bit special due to it’s very famous 28 arched stone bridge. It is claimed to have been built 2,000 years ago by the Romans who ruled here in those old days. However, it is not really quite as old as that, having been built in the 16th Century by a Catholic monarch after the Moors were sent packing from Spain. This very old port was important during the medieval times when the Spanish were exploring in the Americas. It was from this port that the seamen discovered a newly found land, which we know as New Foundland! But the bridge in all its glory . . . .

We stopped here for our mid-day, or was it afternoon, meal before setting off on the climb out of the river valley, following the coast road to the next river, The Rio Deva. This we followed inland, a long, steep, haul up the valley until we eventually came to a wide, modern bridge, over which we crossed into the Principality of Asturias. Ahead of us we could now see the Picos de Europa, the stunning Peaks of Europe.  So we had made it! But I cannot say enough in praise of Irena’s determination, for our Polish doctor was not a cyclist like the rest of us. But she certainly is now!

Our mountain road now took us along side the Rio Cares, which over millennia has cut a deep gorge through the mountains.

Again we end the day’s ride with the sun light rapidly fading. The beauty and magnificence of the shear rock walls of the Cares Gorge, rapidly disappearing into the twilight gloom as we emerge into a wider valley and the camp site at Arenas.  Here we opt for the “luxury” of log cabins, rather than our little 2 person tents.

And just as well, because Monday’s sunshine turned overnight to mountain mist and rain.  And with the mist, we missed the unique vistas that we had come to see!  Perhaps next year?

Setting off in the damp murk from our camp site, we came across a lovely little Roman arched bridge. A must for a photo shoot, and like Winny the Pooh, launching of pooh sticks. And where was this? Appropriately, the bridge at Poo de Calabres!

Next, another long climb over a mountain ridge and time for elevenses. Wet and deflated, Ewa had her 4th puncture!  But at least the rain had stopped when later, we had our picnic lunch in a chestnut orchard, (or is it a nuttery?), by a mountain stream.
But why did we leave the coast to detour into the Picos?  Well, here in the mountain fastness, the reconquest of Spain began in the year 722, but took another 770 years before the Moors were finally expelled from Andalusia in 1492.  (Well, that should give us Brits a few more years in Gibraltar!).
As you probably now expect, it was another climb up another mountain pass. leading to the site of this first battle of reconquest.  Here at Covadonga (meaning the Cave of Our Lady), is – a cave!  Well, you have heard of Robert Bruce and his cave, add in the grotto at Lourdes, and then you get some idea of what this political, religious, and historical site means to the Spanish.

And the Covadonga bit? The all conquering Moors were pursuing a small band of remaining Christian Spaniards who were fleeing into the high mountains to hide. Finding a cave, exhausted they stayed over night to rest. The leader of this demoralised band, Pelayo, was woken by a vision of the Virgin Mary. “Fear not” she told him, “Tomorrow I will protect you. Go forth at dawn. and here in the narrow pass, lay ambush on the army of the Moors. You will prevail!” And so they did and slaughtered so many of the God’s enemies that the rest fled in panic. The first victory of the Spaniards over the the all mighty Moors, and so began the Re-Conquest of Spain.
It also has a significant tie-in, with the myths about Santiago (which means St James), the subject of our pilgrimage.  For he is known to the Spanish as “St James the Moor Slayer”

Next, a lunch stop at the town jewel of the Picos, Cangas de Onis, and then another river to follow, but at last downwards, back to the coast at Ribadesella.  It was on this down hill journey that Yoshi had his Damascene vision.  Pulling into the forecourt of a hostales, there ahead of him, standing in full frontal pose, was – a naked lady!  Was it a miracle or just a mirage?  Well, from the number of artic lorries parked up, we decided that the hostales must serve more than just a jolly good cuppa tea!
Sorry, no photos of the naked lady!
Across the River of Sella (Ribadesella, get it?), and a very hard climb out of the next valley, took us to our first albergue peregrinos (which means pilgrims hostel) adjacent to the church of San Esteban de Leces.

A bargain at only 3 euros a night, to holders of the Pilgrim’s Credenzia, which we all had.  We finished the day with a meal in a little local bar, washed down with superb Asturian cider.  Very more-ish!

When I wIll be back for you to see the next bit of our travels!
Des