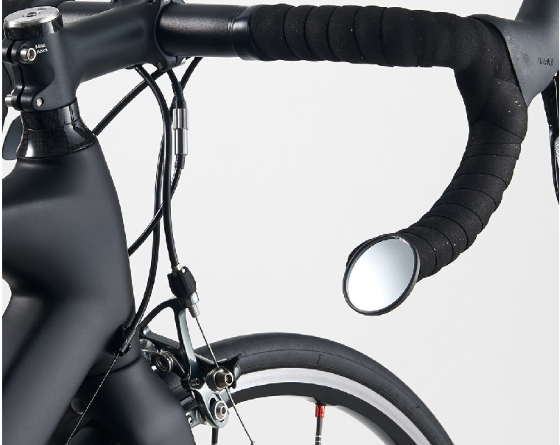 We do not need statistics to tell us that there has been a significant increase in road traffic in recent years. We have seen and experienced this increase in our daily lives, and especially when out riding our bikes. It is also evidenced by the increase in accidents that our club members have been involved in, plus the daily incidents of careless or dangerous driving that we see or are exposed to. As evidenced by this example of Vince being squeezed by White Van Man idiocy!

Whilst bike cameras are beneficial for recording such events, they do not prevent them happening.
Similarly, bike helmets are very sensible and useful accessories in the event of coming off our bikes, but again, do not stop the incident happening.
There is however a very useful and inexpensive accessory, that can help to avoid, or lessen, the impacts of many incidents/accidents occurring. And that is a handlebar or other type of rear view mirror.

And why don’t Cycle UK, British Cycling, and other cycling organisations, who are supposed to campaign for safer cycling, not recommend them?
Proper use of mirrors is an important part of the Driving Test for car drivers and motor cyclists. Failure to do so is an automatic driving test failure. So why do so many cyclists, not use a bit of common sense and fit them?

It so happens, that recently I read an article from a very experienced bike rider, who in 1979 cycled across America, and seems to have never stopped riding! He started his working life as a bike mechanic, has written books and articles on cycling – he seems to live cycling – not just do it!
Another claim to fame is that he gets out every day to ride his bike, and since starting to keep a record from the 1st Jan 1994, had reached 10,000 consecutive days on 16th May of this year. Hence this photo!

Today (25 Nov 2021) I see from his weekly technical article in ttps://www.roadbikerider.com/replacing-brake-cables/ that he is now up to 10,193 continuous days of getting out on his bike. Perhaps one of you would like to work out what his average, daily mileage has been?

So getting back to the interesting article, by of course Jim Langley, who has quite a bit of experience of riding road bikes – this is what he had to say!

A Simple Tip that Can Prevent a Crash, By Jim Langley.

Twice, I’ve witnessed scary crashes caused by a common mistake, which is turning your head to look behind you. Here’s what happened to two roadies I saw hit the deck after turning to look. And following the stories, is a very useful accessory for avoiding such crashes.

The first incident took place on a weekly group ride. I’ll rename the victim “Rudy.”
As we crested the top of the final rolling hill before the downgrade to the sprint finish, he punched it, attempting to get a gap and hold it to the line. I watched this move from about 15th position.

It wasn’t a dumb move. Over the years, lots of us use this tactic to beat the other sprinters to the line. But Rudy, unwisely decided to turn and look back to see whether he had opened enough of a gap. And, at that moment – as he was doing his best owl imitation – his front wheel hit a pot hole. Rudy’s front end jack knifed and he went straight down hitting the road head first. A couple of others also fell, but only Rudy required the ambulance.

The second incident happened to a friend I’ll call “Lucky,” which will ring true after reading his story!
It occurred on the often busy coastal Highway1, here in Santa Cruz, California. There’s a decent hard shoulder on that section so we were side by side talking, Lucky on the outside, the traffic side. Later we saw five riders coming toward us on the other side of the road. Lucky said, “See ya, Jim, I’m going to hop on that group!” He looked behind to check for traffic, but in doing so he veered out into next traffic lane and towards an overtaking car.

I heard the screech of brakes and the impact. I then saw the Toyota that hit Lucky, pass me and pull over, the driver jumping out to run back. I got off my bike and followed. Miraculously, Lucky was sitting cross-legged in the road merely stunned because he had run into the side of the car! Instead of being run over, maybe killed, he was just dumped in the road. There wasn’t even any obvious bike damage. “Lucky” indeed!

Looking Back is Risky

The point of both real-life crash stories is to illustrate how dangerous it can be to try to look behind you when riding. It’s dangerous because turning the head and/or body will usually change the bike’s balance and cause you to veer off course. In Rudy’s case, that inadvertent turn into the path of the car, caused his faceplant. For Lucky, who claimed after being hit, that he had looked back, he obviously did not do so very well, or he surely would have seen the Toyota.

The obvious accessory solution for looking back, is a rear-view mirror. In my experience, “Rudys” and “Luckys” and a myriad of roadies like them are highly unlikely to use mirrors.  I have used them a lot and know how well mirrors work. Using a mirror would have saved both Rudy and Lucky. So, perhaps we can persuade some Rudys or Luckys to give them a try!

What Jim Langley has highlighted, is the dangers of looking over our shoulders, and even when doing so, how much do we actually see and register with a quick backward glance? That is not to say that one should use mirrors exclusively and not check by look back behind you. But before looking back, check in your mirrors that it is safe to do so, to avoid being broadsided by an overtaking, faster moving vehicle. Regular mirror checks will keep you, always, aware of traffic approaching from behind.

This leads me onto cycle training, or rather the lack of it!
We do not have to take a test, like for motor vehicles. And any cycle training that is available is very basic. But it will, or should, cover safe positioning on the road. But not of course, use of bike mirrors!

Take for example, cycling along the Brighton Rd to the Tesco roundabout, heading out towards Coulsdon. A very busy stretch of road, which splits into 2 lanes as we approach the traffic lights, then going around the corner it becomes 3 lanes. Here we need to get from the nearside lane, to centre lane at the next set of lights. Then the road splits – straight on Godstone Rd , or for us, a right fork continuing around the roundabout to the next set of lights – etc – etc! And during all this lane crossing, changes in speed and direction, we are being passed or squeezed by cars and artic lorries. This is a situation where we need eyes in the back of our heads, to see what is behind us, how close, and doing what. Not an ideal, or safe situation, for trying to monitor the situation by looking back, behind us. But so much easier, and safer, by a few quick glances in a rear view mirror.

Road positioning and use of mirrors are major topics for instruction, and practise, on courses run by the Institute of Advanced Motorists

If there were advanced bicycle training courses, road positioning combined with proper use of mirrors would also be the most important topics. The incident with Vince is a situation, which unfortunately is too common. Hence something which an Advanced Cycling Course would include.

Your thoughts/comments would be welcome! Send to anerleygazette@gmail.com