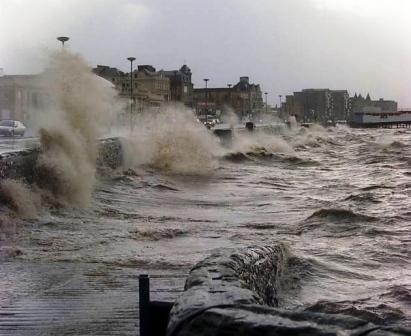 The 1st of Feb of this year was a beautiful sunny day for a bike ride as reported earlier in this Gazette. But this Spring like weather did not last long, with February having the worst winter storms for many years, First it was Storm Dudley. then Storm Eunice – the worst since the Great Storm of 1957 – followed a couple of days later by Storm Franklin.

These stormy winter’s days reminded me of the my last Sunday bike ride in December 2013. So some memories of times past – and how the winter weather made me think and plan of summer rides.  So if you want some ideas for a foreign tour, or one at home in the UK – read on!

All this rain, high winds and the icy roads of the last Sunday Ride of 2013, reminds me that I never completed my series of write ups on our summer tour, so time to pick up from where I left off, with Stage 5:

It was then 4 days since we reached the River Mosel in Luxembourg and in the evening of our first day, crossed the border into Germany (see http://anerleybc.org/the-german-tour-stage-1/ ). In the early afternoon of our fourth day we had reached Koblenz where we would finish our bike ride down the Mosel. From here we would start the second part of our tour, heading up stream but now following the River Rhine.
Koblenz has a history going back over 3,00o years, and like most ancient places in Europe was once a Roman citadel. It has an early historic association with England, or rather Britannica through the person of Julius Caesar. In 55 B.C. Caesar successfully defeated some Germanic tribes and occupied the settlement which became modern Koblenz. Having subjugated this area around the Mosel/Rhine he set off and invaded and occupied  southern England, or rather Britannica.
As you would expect for a city with such a long history, Koblenz has much to see and lots of interesting places to visit. It hard to believe that this beautiful old city has been raised to  the ground several times in its not too distant past. The last time of course being during the last war when it was heavily bombed by the Allied airforces. This is a photo of a raid on Koblenz by the U.S.A.A.F The recent floods in the U.K are fortunately rare, but much more common and severe in the Rhine and Mosel valleys. On the day that we arrived in Koblenz, it was a hot and sunny. At the confluence, where the Mosel joins the Rhine it looked like this. But after a period of heavy rain it often looks like this! With all this awful weather of the past couple of weeks I have already started thinking about next summer, warm sun and cycling down country lanes. But where to in 2014?
The stormy seas that we are now seeing, battering the coast of the west country remind me that there is so much to see, here at home in the U.K. So this year the summer cycle will be, not meandering down country lanes, but the ups and downs of the many hills that are a feature of Cornwall  and its rugged coast. Onwards and upwards!