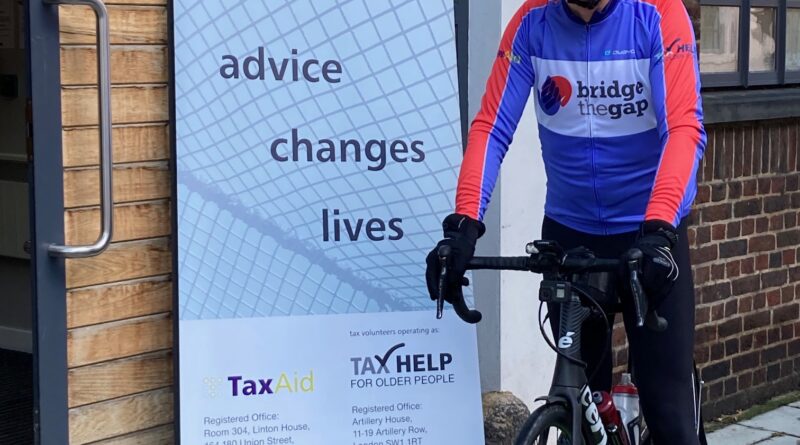 Avid readers of the Gazette will have seen the piece in the October edition covering my planned charity ride to Dorset and back – “One Goes Mad in Dorset!”  Well I did live to tell the tale and so here it is….

This was not an organised charity ride.  Well it was, but I did all the organizing J.  It was my idea, I planned the route and I rode on my own for 4 days.  This had its pros and cons.  It meant if anything went wrong I only had myself to blame – or my Garmin!!!  It meant that if I wanted to stop for a rest or to admire the view I could do.  But it also meant I had no one with me to push me along when the going got tough.  And boy did the going get tough on day one.

Before you start feeling too sorry for me, I did have an amazing support team in the form of my wife Mary.  I am not a hardcore adventurer and so was relieved when she said she would drive with all of my stuff for the four days – so we met up at the end of each day and she also gave me a few pep talks to get me through day one.

I had planned a long first day as I wanted to have a shorter second day to allow me to get to the charity’s offices near Bridport in good time and meet a few of the staff there.  A few complications I hadn’t factored in – I’d had a cold for the previous week so had not been out as much as usual; a lovely south westerly headwind decided to blow; and navigating using my Garmin was not that easy at times!  The latter made me appreciate even more the luxury of following our great ride leaders.

I left home at 7.15am just as the sun was rising.  Heavy rain had fallen overnight so the roads were very wet in places.

I headed up to Kennington which is where my “official” start was.  To try to generate interest and donations, I had a few photos and videos taken for the charities to share on social media.

Then I was off.  Across Lambeth Bridge then heading west, passing Buckingham Palace, Hyde Park Corner, the Royal Albert Hall, Hammersmith, Chiswick, Hounslow and Staines.

As I skirted the south side of Heathrow, the headwind was really starting to get to me.  I wondered if it was just in my mind but then I saw a couple of flags blowing in the wind and I thought “no, this is real”.

Shortly after that, I experienced my first strong desire to throw my Garmin in the bin!  Don’t get me wrong.  They are amazing devices and I couldn’t have done the trip without it.  But at times it is not the easiest thing to follow, especially when it is taking you off road, for a cycle lane or such like.

Around Chobham Common it seemed to be telling me to turn off into the Wentworth Club estate.  This didn’t feel right, but it kept telling me the alternative was “OFF COURSE”.  So I persevered and got to see some lovely properties and amazing golf scenery.  But I was lost! And “OFF COURSE”. I then doubled my trouble by taking the wrong turn coming out of the estate.  When I got to Virginia Water I realised this was not good so turned right around.  Over that first day I added about 8 miles to my trip through these issues.

Tip for Garmin users: one of the annoying “features” of Garmin is that it tells you that you are “OFF COURSE” but doesn’t give you an easy way to get back on course.  I found the best solution was to stop, look at the Garmin app on my phone to see the route on there and work it out for myself using that with the added help of google Maps!

Rant over.  I had a beautiful lunch at Windlesham Field of Remembrance but was very conscious that I was much later than planned.  So I pushed on through Bagshot, Camberley, Basingstoke, and finally reached my afternoon coffee stop in Whitchurch just before 5pm.  I still had 30 miles to go, knew that it would be dark soon and was pretty despondent.  I called Mary and she helped me find a more positive mindset.  I decided to break it down in my mind into 10 miles chunks to make it more manageable.

I pushed on through Andover, then into the countryside.  I had planned my route to avoid main roads as far as possible, but I did have to join the A303 for two miles near Stonehenge and, by the time I got there it was dark.  Joining that dual carriageway in the dark with lorries and cars going past at 60-70 mph was not fun.  To be fair, and to my great relief, they all gave me a pretty wide berth, but I was very pleased to leave it near Amesbury.

I headed south following the River Avon down some “picturesque” country lanes but it was now pitch black and I could see nothing except the little bit of road illuminated by my front light.  I had bought the light recently and not tried it out.  Rookie error!  Without warning, it switched to a very dim, barely on, beam as the battery had run down much faster than it was meant to.  I had to slow down as I could then literally only see a few feet in front of me, and was on tenterhooks expecting it to die completely any minute.

Boy was a glad when I started to see the glow of Salisbury’s street lights emerge in the distance.  I finally got to our B&B at 8.40pm.  My plan for us to have a nice dinner in town was a distant memory.  Instead Mary had kindly raided the nearby Coop and I enjoyed a protein shake and a microwave lasagna – it tasted so good!

That first day really had been the perfect storm.  After that everything seemed easy.  Day two was sunny and mainly beautiful country lanes, particularly through the Cranborne Chase Area of Natural Beauty.  Lunch at Templecombe, west through Sherborne and then south towards Bridport.  I couldn’t avoid a tough hill about 10 miles from the end (800 feet) although it wasn’t as bad as Abbotsbury Hill sounds, as described by Des on his recent Dorset tour.

I arrived at the charity around 4.30pm to be treated to some home made cake.  Then the luxury of dinner in the pub we stayed at in Bridport.

Next morning it was a misty start and a day of hills, hills and more hills.  By the end of the day I’d climbed over 6,000 feet but I felt strangely ok.  Lunch in Gillingham and some stunning views coming down into Wylye.

Afternoon coffee was planned for Amesbury but I arrived too late so settled for a Lucozade and a chocolate bar from the Murco petrol station (glamorous I know).  The last 20 miles had a military theme heading through Bulworth, Tidworth and Perham Down.  A few warnings about tanks crossing but the upside was that the road surfaces were very smooth and so I was able to make fast progress.  Arrived at our B&B just north of Andover before dark!

And so to the last day.  The end was in sight.  I knew it was going to be the flattest day of the four so I was in good spirits.  A beautiful country ride down to Whitchurch then I pretty much retraced my ride from day one – without the wrong turns.  As I passed the infamous flag I noted it was now hanging limply, but to be honest not having a headwind felt like I had a tailwind!

As I neared London the congestion became very apparent and I hit school pick up time.  This slowed me down and I skipped my planned coffee stop and pushed on.  I arrived at Kennington around 5pm to a lovely welcome (bunting, balloons and a few cheers which was very touching) and a plan to hit the pub for a celebratory drink.  I still had to get back to Purley so initially declined but then thought, why not.  So joined them for just the one.  I was flying on the ride home and my front light shone very brightly all the way!

Lessons learnt?  Don’t be TOO ambitious; test out your equipment; and go for it – since the ride I have felt stronger on my bike both physically and mentally.

For the stats nerds, these were the scores on the doors:

And if you want a feel for the ride, I put together a 2 minute video which you can watch here (thanks GoPro – your battery life is rubbish but you do take some great footage).