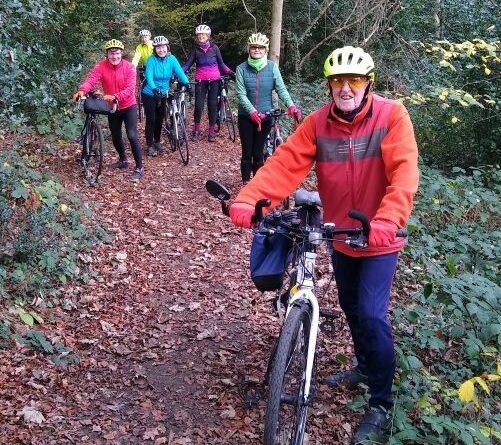 Our next ride was on Tuesday 16th, which turned out to be a beautiful sunny morning.
There was a mass gathering at Shurgard and it seemed as though the whole of Anerley B.C were there! Jim K and a sub group lead by Vince – Tom Vaz with another group – and my lot of 7. The traffic was quite heavy, but fortunately we were off to different destinations.
My ride was to High Elms, and letting the other groups go first, we set off to Warlingham and the long slog up to Botley Hill Farm. As you can see – a lovely blue sky!

But the stop was not so that Anerley’s ladies could pose for the Asif to take a picture, but because we had just had, “puncture!” called by Tom Tom. Only a slow one but it still needed an inner tube change. There is nothing worse than winter punctures, having worked up a sweat on the long climb to the top of the ridge, even though it was sunny, we soon began to feel the winter chill. Fortunately for Tom Tom, it was a front wheel, so much easier and quicker than a rear wheel. Plus Tom Tom was very efficient and organised, so got it quickly fixed whilst we all stood, shivered, and watched!

It took a bit of time for us all to get warm again, because from Botley it is all down hill until the uphill bits start again after passing Tatsfield Village Green. Whilst this first sharp uphill is not normally welcomed – it was this time! By the time we got to the Sampan we were back in our comfort zones.

Here, instead of passing to the right of the restaurant – Grays Rd to Knockholt, I took the left fork, which eventually leads to New Barn Lane and Cudham. New Barn Lane is a scenic little lane, which starts off with a long down hill, with lovely views into the valley on the left. Unfortunately for most of my group, who had not been this way before, the bit going down, then goes up – but steeper than the downhill bit! At the top of which we came to Cudham Lane, and the village pub dating back to 1787. Now a tourists’ hill top viewpoint overlooking the valley opposite.

From here we had a long, long, downhill which eventually took us to the A21 at Green Street Green. Shortly after leaving the pub we came to a road sign saying “Road Closed”. I just hoped that we could get through because the only detour would take us up and down hills like those which we had taken us to Cudham’s village pub!
After passing “Road Closed” signs at regular intervals, we did, fortunately, get through to the A21 with no problems. I only mention this because, there were a number of road closures in this area, and later the signs did mean what it said! But before that we got to our destination, our tea stop at High Elms Golf Club.

The ground floor tea room was most welcoming on this cold morning and there were plenty of empty tables for us to sit at, and have a leisurely warm up with a hot cuppa. But eventually we had to make a move and head for home.
Exiting the golf club car park we were confronted by another “Road Closed” sign but seeing a couple of other cyclists ahead of us we started the climb up to Downe. Does that make sense? Up to Downe!
Halfway up High Elms Rd we came to a large van blocking the narrow lane, plus a barrier and a workman in the usual hi-viz gear. But he was not going to let us through!
He did however point to a pathway on our right, explaining the cyclists that we had seen earlier had gone that-a-way. So we did likewise and ahead of us soon came to a pathway going both up and down the hill.

There were traces of wheel tracks, showing that cyclists had been using this pathway and we also met a lady cyclist coming down the path. She assured us that it would soon take us back onto the lane beyond the closed bit. I had no problem cycling all the way to the top, where it came out at the Junction of Mill Lane and High Elms Rd. Here at this road junction was another road barrier, and a big lorry parked right across the road so that not even a bike could squeeze past. But from here on, the road was clear into the centre of Downe and although there were more road works in Downe there were no road closures. So all in all, an eventful ride!
Des.
And a thanks to Asif, our photographer, who is the invisible, missing member of our group.