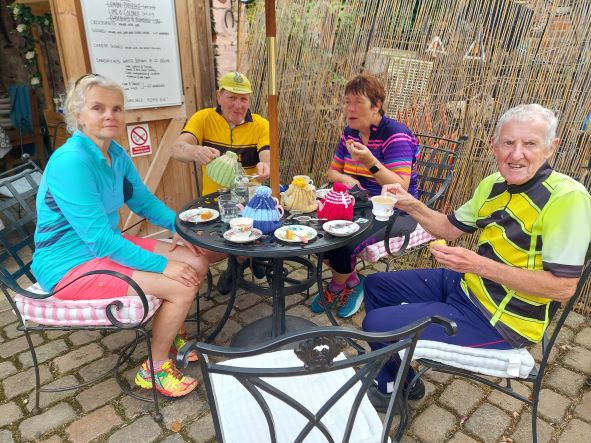 What would summer be, without some Anerley Away Days? It is always great to go somewhere new to explore for a few days with other Anerley Club members. Last summer a group of us had a great time, right from the start on Day 1.

A bonus was a newly opened Premier Inn for us to stay at, and only a 3 hr drive from Purley, so on arrival we had an elevenses coffee break, then got changed into our cycling kit, unloaded our bikes from the cars and were off and away to explore!
We headed north to Coate Water Country Park on the outskirts of Swindon. This is a 70 acre lake created in 1822 by damming a local river to provide water for a new canal. The canal became obsolete in 1914 (replaced by railways) and the lake and surrounding area later became a nature reserve.

We had a choice of route, see map below, the main A346 which was a busy main road. Or running parallel to it a disused railway line (red dots), now a cycle route. However I had already decided to make up my own route – my blue line added to the map below.

This route can be seen in more detail at https://cycle.travel/map/journey/343600 where it can be expanded by zooming in.

After leaving Marlborough High Street we started a long climb heading north west, following the Wiltshire Cycle Way to turn off after about 2+ miles (at blue number 2 on map). Had we continued following the blue dotted route to where it is crossed by the red dotted Cycle Rt 45, we would have come to the notorious steep climb of Hankpen Hill and it’s famous White Horse. It was carved in the chalk hillside in 1838 to commemorate the coronation of Queen Victoria. We had intended to do the full climb up Hankpen on our last day, but due to unforeseen circumstances never had the “pleasure” of doing so.

I chose this route so that we could go thru some of the idyllic little villages in the Wiltshire countryside. The first 3 all being Ogbournes – Maizey – St Andrew and St George being beside the little River Ogbourne, and between Nos 4 and 7 on the map above. But moving with the times the villages provide a Google Street View on their web site!

Later we joined Cycle Rt 45 (red dots), which eventually became a purpose built, tarmac off-road pathway. This led us up and over the M4 motorway via the Curley Wurly Bridge.

And onto Coate Water Park where we “wined and dined” at a take-away kiosk.

It was after this that I led the troops astray and got hopelessly lost, even the local postman that we met didn’t know where the road to our next destination was. But he did know where Purley was because he was a South Londoner! Eventually, more by luck than Judgement I did got back on track and led them to the promised land of milk and honey at another historic village, Aldbourne with it’s highly recommended by cyclists, tearoom in what had originally been the blacksmith’s forge.

On our way back from Coate Water I had again devised a longer and different return route, which can be viewed here https://cycle.travel/map/journey/343607

Our tea stop at Albourne is shown at No.8 on this map. However it must have been too much coffee, I got lost again and missed a left turn into a minor road at No9 on the route map. Staying in the major road we eventually ended up at Ogbourne St George on the  main A346 road into Marlborough. When I say “main road” it would just about be a B road back in our home territory! Very narrow and with the afternoon rush hour – tail to tail traffic, cars, vans, artics, etc – totally unsuited for bikes – especially 5 of us in convoy!
However unlike our impatient drivers back in our home territory, not a single hooter blast. In return, every time we came to any bit of grass verge wide enough to pull off the road, we did so, but our progress was pitifully slow. It was great to get back into Marlborough and normal urban roads and traffic.
Had I realised it at that time, we could have diverted from that awful A346, onto the parallel Cycle Rt 482 along the disused railway line. From then on, we always tried the bike routes to avoid main roads! But regardless of the two unintended diversions it was a very interesting and worthwhile day’s ride in new for us, territory.

Back at our hotel, we met up with Dave Stott and Marilyn, who had not been able to drive to Marlborough in the morning. So now with our full compliment of Anerley riders, it was an evening meal with a few bottles of wine to fortify us for the next day’s ride!