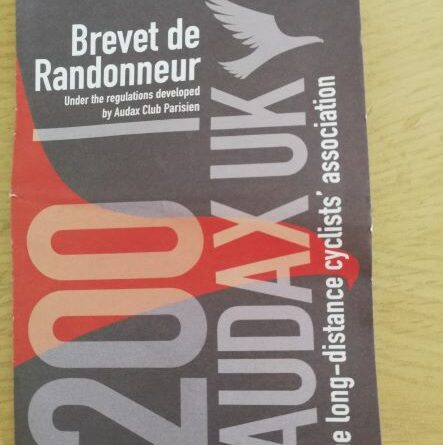 Tim Styles had persuaded me to accompany him on this 200km Audax as part of his training for the London-Edinburgh-London. The London – Edinburgh – and back was a trip I had declined to join and this is why. It is a long ride – 1,500km – and has to be completed in under 125 hours! Our 200km audax seemed to me, to be a much more sensible challenge. Part of the challenge is navigating around a complex route of country lanes and finding control points at which you are required to find the answers to clues. To aid riders, the event organisers provided a GPS file to download onto our favourite satnav devices https://ridewithgps.com/routes/29430208

On the morning of the Audax, the alarm woke me at 4.45 after a pretty disturbed night sleep and I wondered what had possessed me in a weak moment to agree to this.  I should have been more aware as the Styles’ have “previous” on this type of suggestion.

I left home at 5.00am to pick up Tim who was ready and waiting at 5.15 (having told him I would pick up at 5.00).  We arrived at the carpark just off the M4 around 6.30 am and prepared bikes for the start.  Looking around I realised I was a bit light on luggage space compared with other bikes; I should have had a small bike packing bag to give more flexibility to have more warm layers that could be stored if it got too warm later.

I layered up with base layer of a craft vest, thin arm warmers, full length sleeve merino base layer, Anerley short sleeve top, long sleeve medium weight wind-stop layer, and a packable rain jacket; full length bib trousers (autumn/spring weight); double socked (no overshoes); buff; skull cap and helmet; fingerless gloves with merino inners.  A bit Michelin man, but it was a very cold morning.  Later in the day after it and I warmed up I stored the rain jacket, merino gloves, buff and skull cap in my cycling jersey pockets.

About 75 riders were signed up for the 200km and I guess around 60 of us had assembled for the start, before which, we were given a Brevet Card and a the list of clues to be answered at Control Points and entered as proof in the Brevet Card.

It was frosty as we set off at 7.00am but the sun was out and I didn’t have any concerns regarding slippery roads. Over the first few kilometres there was a forming of groups or pairs.  Tim & I were in a group of around 10 riders motoring along at a fair pace averaging over 26kph until we reached the first “control point” at around 33km. And below at bottom left is the question that we had to find the answer to.

And the historic building on the signpost at the crossroads was not too difficult to find!

It was at this point that I found I had a flat back wheel. Fortunately there was a large grassy island for us to get off the road as it was a bit of a fiddly change of inner tube, and I resorted to using compressed air canister to inflate to save time. Tim stayed with me and looking at my data we lost about 20 minutes there.  Then on to Hungerford where Tim led us down to the river and a favourite tea shop only to find it closed! You can just make out a cyclist to the left of the Tutti Pole Cafe, which backs onto the Kennet Canal beside the road bridge and the start of the second segment of our ride.

With the Tutti Pole cafe being closed we went back up the High Street to Coffee#1 – really good coffee, a sausage bap, and pain au chocolate was excellent.  The time stamp on my receipt was 9.21 am and we were 47km in. The 200km Audax route then went over the canal bridge, and west for 55km to another checkpoint.  Towards the end of this, the route became a bit bumpier (hills!) and we started seeing people on the return leg to Hungerford.  Some of this section was along the NCN route 4 and I recognised it from a previous, more leisurely cycle tour via the Kennet and Avon Canal to Bristol.

See https://cycle.travel/route/kennet_and_avon , a recommended ride, especially for those club members with gravel bikes.

We arrived at Westbury, the return point and it’s Pickleberry Cafe, soon after 12.00

We then had a longish queue to get served; the food to be honest could have been better and I wasn’t impressed with my sausage roll and baked beans which tasted burnt.

Heading off again, the café had largely emptied of cyclists but as we left a few more turned up and we passed a few more stragglers as we started retracing our route back to Hungerford.
Once we had fallen off the large group at 33km, I had spent a lot of time in Tim’s slipstream but on the way back to Hungerford I started taking the lead a bit more.  The views through the Vale of Pewsey were good and we could see one of the chalk horses on the hillside.

We found we were making progress and passing the odd one or two other Audax riders along this section. But out of Hungerford there were a few steeper hills and three “control points” to note.  The last of these “control points” was at Yattendon.

Here, at the “control” we had to find the phone number of Adam and Eve, which we discovered was the village hair dresser’s. We stopped on a bench for a few minutes to fill in all the answers on our Brevet card and have an energy bar. Soon we were joined by the fixed wheeler and the other chap.  The fixed wheeler headed off a few minutes ahead of us but we soon passed him as he was walking up a fairly brutal (but short) hill.  It was then largely downhill over the last 20km back to the village hall for well-earned tea, a bite to eat, and the registration of our Brevet card.
Officially the ride was 207km, and we finished at around 5.30pm.  We cycled back to the car, heading the wrong way from the hall at first so the full distance ridden was 212km at a respectable 24.2kph average.  This was my longest ever ride and I was surprised that my feet were not in pain at all; a notable improvement on other longer rides I have done so perhaps double socking works.  The weather had been pretty kind and I had been able to manage the temperature changes quite well.

A postscript was that as I was dropping Tim off I got bad cramp in my leg and I took a couple of salt tablets.  I also suffered bad cramp in the night so taking more salt is a lesson (previously learnt on triathlons and marathons which I should have carried over to such a long ride).

It was a great day and thanks to Tim for encouraging me to do it and staying with me the whole way round.