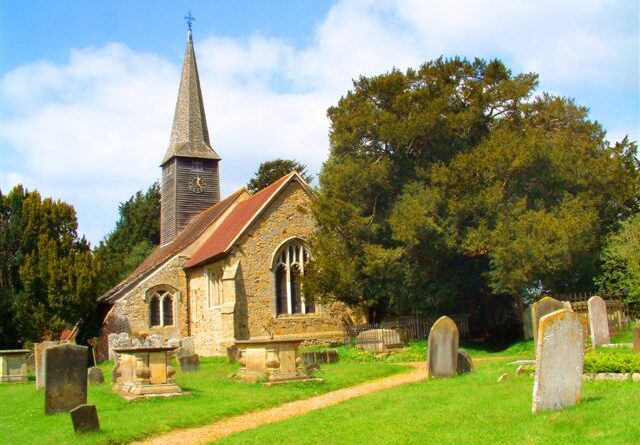 The month of April celebrates our English patron saint – St George the Dragon Slayer. Unlike our other UK nationals, the Irish, Scots and Welsh, we English do not tend to be great flag wavers. The only time that we normally see the English flag is when our national team plays football!  However I am always reminded each year of St. Georges Day, because there is a village in Surrey, that is always adorned with a mass display of our national flags during the month of April. It also has a very interesting history, so read on!

So the map reading challenge for the month of April, is to find this Church dedicated to St George. To help you, it is on the O.S map of our area (Sheet 187), in grid square 39/47.

It is clearly a very old Norman church and the choice of St George as it’s patron, suggests a connection with the Crusades of that period. But the site is considered to be much older, very much older.
Beside the church is a very old Yew tree, which is believed to indicate that this may have been a much earlier pagan, religious site. This Yew is one of 50 Great British Trees, named in honour of the Queen’s Jubilee. The ancient yew is claimed to be over 4, 000 years old!

To the right side of the tree (photo above) is the remains of an ancient door.  This gave entry into this large, hollow tree.  Originally there was seating inside, used variously during it’s long history, for revelry, meetings and refuge. The use for refuge is proven by a cannon ball dating back to the English Civil War in the 1640s.  This remained imbedded in the tree, until more recent times, when, as the tree has gradually rotted away the cannon ball could be extracted.  It is now kept by the church as part of it’s various historic artifacts.
So here is a real bit of England’s lost and forgotten history. If or when you find it,  a photo of you please on Anerley Chat (or to me), to prove it, just like Julie McGhee below!