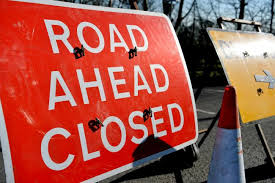 It was a full house for the Tuesday Rides! After the dampness of the poorly attended Sunday Rides the expected sunshine brought everyone out. Leading the “relaxed ride” group, when we arrived at the Abinger Hammer tea stop, all the garden tables were swamped by a mass of riders in Anerley tops. What a grand sight! Did anyone take a photo?

Our relaxed ride turned out to be not exactly relaxed.

It had been my intention to head out via Chipstead valley, forgetting that it had been closed, due to road works, for several weeks. Peter took his group up the steep climb of Portnalls Rd to Chipstead on the Hill. Hoping for a more relaxed start to our ride, I opted for Outwood Lane, expecting that by now the road works would be completed. Or if not we would be able to get through anyway. However when we got there, the barriers went completely across the road.

We opted for the footpath which bypasses the roadworks. Not a good choice due the spring growth of brambles and stinging nettles!

Having got past this first hiccup and back onto tarmac, as a result of a misunderstanding I lost all my group as we went through Kingswood, I continued on along the main route up to the A217, and the rest of my group went thru the Kingswood Warren estate. However, after a bit of fretting, we did eventually all meet up again on the Dorking Rd.

The rest of our ride was uneventful until we got to Little Bookham where my intention had been to take a left turn off the Guildford Rd for the climb up Beech Rd, a nice scenic alternative route to the top of Ranmore Common. However, when we got to the turn into Beech Rd, there was another

ROAD CLOSED sign. Undeterred, I lead my group up Beech Rd because I knew from past explorations some 10+ years ago, that there was another, parallel, road. If I could find it!

After a while I was beginning to have my doubts about whether I was following the correct very minor lane. I stopped to check with those modern cyclists who had mapping apps on their mobiles. These confirmed my memories, – yes we were on a little used road which did lead up to Ranmore Common Rd. But what it did not show, was how steep the climb was up to the top of the common!

So not exactly a relaxing ride to Abinger Hammer. But we did all make it, and I am sure they won’t forget this lovely little back lane to Ranmore Common!

The return journey after the tea stop was a straight forward ride along the A25, and then back over Box Hill, where the photo below was taken. And they are still smiling!

And just to finish this little story, when we got to Kingswood, Bob the Builder lead the troops down Outwood Lane to the barriers closing the road. Here, some workmen said that, yes, we could ride through the road closure. Which we did!