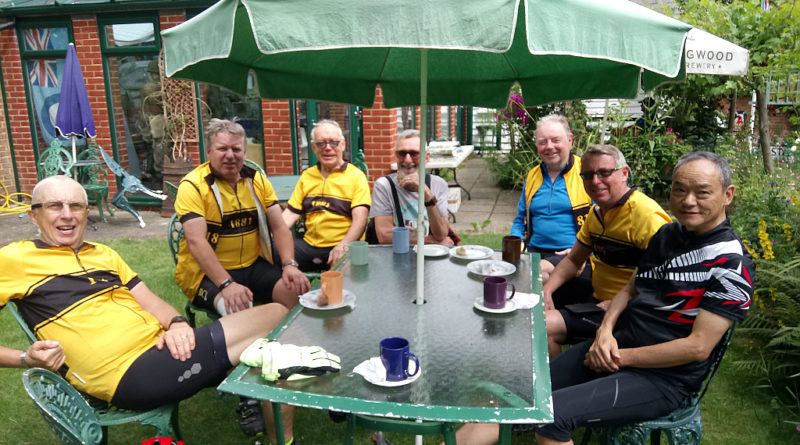 My 1st ride on a Saturday that included  Pete, Roger, Ricky, Jim, Mick and Frank. Karen usually comes but out on the day out with her brother riding to Brighton.

Most surprised to see your right knee encased in heavy bright white material that looked like a plaster job! You explained the background having had an arthroscopy many moons ago leaving a weakness that flares up from time to time. Being a hardy fellow you strap it up for Morzine skiing! My right knee gives me twinges from time to time.

In view of your knee issue you lead from the rear as they say with Roger as your default team leader. We set off for Kent the usual route via Meike’s house, Sanderstead pit stop, Warlingham Botley Hill and said don’t forget the Tatsfield turning! Roger shot off from Botley Hill and went the short cut to the Shampan [Spinning Wheel] rendezvous. I warned you of the Tatsfield Lane gravel washout bend and steep hill just before the Shampan.

We coasted along taking turns on the front through Knockholt, Halstead over the A21 roundabout and down glorious Shacklands Road hill where I missed the right turn to Shoreham village!

Arrived at the delightful quaint café, ordered apple pie and coffee and remarked about the old sign on the wall ‘Golden Shred’ and James Robertson’s ‘golly ‘ marque.

Then Graham our motorbike rocker arrived to join us in the garden. See photo.

Admired Graham’s immaculate new Honda NC750. Rarely goes out on the Honda 1200 Goldstar tourer [Europe in the past] as so heavy and difficult to turn round. Later models have a reverse!

I lead the usual way back and waited at the bottom of Pollards Hill then Sundridge Lane, Chevening, to  Pilgrims Way, not up Clarks Lane but through Limpsfield, Oxted back way via Mohamed Al Fayed’s residence, A25 to Marden Park where I waited..  Onwards to Wapse’s Lodge roundabout and up Salmons Lane to the Wattenden Arms at 1.55pm for a pint of refreshing beer! Roger arrived followed by Mick and Pete but no Ricky or Jim as they had to get back. I was in the seat for the 1st round of beers. I had to leave for hilly Selsdon early whereas my compatriots lived local to the pub. We discussed next Saturdays training course in Wapping for the Prudential RideLondon FreeCycle on 3rd August. Mick still not booked for Wapping training course whereas I had registered in the week. Some years ago I went on the 1st FreeCycle from Green Park. As recommended I went home via Kenly airfield down to Whyteleafe up to Warlingham Green onwards to Chez Kippin Selsdon at the end of a splendid ride.