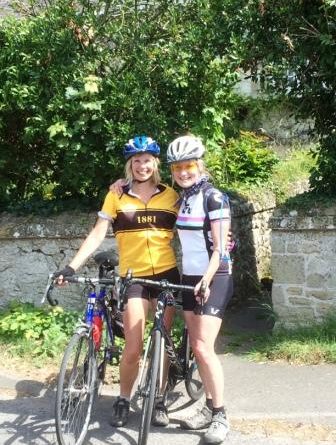 Today was perfect for a bike ride, sun, blue sky, but a sufficient breeze to keep us cool, even when climbing the inevitable hills of the North Downs.

John D did the honours of leading us, a group of 19, on a very pleasant ride to an old Anerley favourite, Horne Golf Club.  John had it very well organised, dividing the group into two sections, with a gap of some 100 yards between each.  This is a safety precaution so that cars and other large and speeding vehicles have a place to pull into in case of need.  Thus less likelihood of a head on, or a crushed cyclist when the car driver tries to squeeze in!  And was it a first, that our riders did stay in their allotted groups?

I was the lucky one cos my group include all the ladies – although perhaps this was not quite so fortunate as I first thought.  But more of that later!

Why is it that Farthing Downs is an up, and a long steep one at that?
The Coulsdon contingent were waiting at the top of the up, so then it was the start of the easier bit, and what goes up tends to go down. A fast descent of Hill Top and White Hill and onwards to Bletchingley and another down as we headed on (with a bit more up) to the old windmill at Outwood, and a group photo. It was here that I tested our 18 brain’s of Britain with the question  “What famous event took place in 1666?”  and one bright spark immediately replied  “The Great Fire of London. Its the 250th anniversary this year”  Yes, correct another bright spark caused the conflagration which burned for days and was watched by the residents of Outwood who could clearly see the flames from this high point by the mill.

From this high point we had the exhilaration of the long and fast downhill into Horne village, and the nearby golf club where John and Meike were already sitting at an outside table, enjoying a cuppa in the sunshine.

I must digress here to enlighten those who are new to the delights of an Anerley Club Run. Not only are they delightful, they are, or can be, educational!

The golf club is bordered on the western side by Bones Lane (I am sure there must be a story about that!) but just down the lane partly hidden by the hedge row, a careful searcher can see this: What you may ask is this lump of stone?    Well the poppies and crosses are the clues. The flat land of the golf course and surrounding area was a temporary W.W.II airfield, used to support the D Day landings on the beaches of Normandy and to attack the launch pads of the V1 missiles in Northern France. I am old enough to remember the V1’s.  The Borough of Croydon had the highest incidence of hits in all of London. I had just started school, and virtually ever day the air raid sirens would howl and we were marched, in orderly file, into the air raid shelter. That is were I learnt the ABC and 2 times table. Happy memories !

But back to the future. Over the sociable break for a cuppa at the golf club, I was able to meet the many new faces who had joined the Anerley since I was last a regular rider. Very rewarding for me, and I hope for them!

And then it was homeward bound. I could sense that some of my group were bridling at the bit – wanting a challenge to test their legs. And so it was agreed that every hill we came to on the return leg we would burn the coals and go full steam ahead.

Not such a good idea, for this was the bit that I referred to at the start of this item. My reference about being unfortunate in having all the ladies in my group.  Well perhaps not unfortunate, but embarrassing!

Every hill we came too, I sprinted like the demented soul that I was, only to see our lady riders passing as if I was standing still. And the champions of the day: Well done ladies, your turn to buy the teas next week!

The embarrassment continued as the ladies surged up Tilburstow Hill into Godstone, and then up the next hill, through old Godstone, But then something happened. I was on their back wheels  as we passed the old village church. But then I remembered it was not their legs which were shot, it was the vibes from the haunted grave yard.
You have not heard about the haunted wanderings of the pirate of Tilburstow Hill?  Well just check out the story at http://anerleybc.org/tilburstow-hill-and-godstones-pirate/l