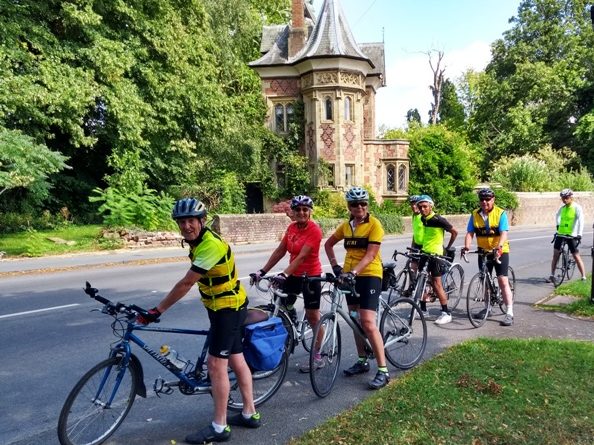 A beautiful sunny day resulted in probably the best attendance for a club ride this year. I am told that a head count made it 29 at the tea stop. Of these, Fran led off the first group of the 10 o’clock starters – 9 in number, and I followed on shortly after with a group of 10.
Following the sensible advise from Cycling UK I should have split my group into 2 smaller sub-groups of 5 each, right from the start. But I did not. However once we got into the countryside past Warlingham, with it’s fast moving traffic, often only inches from our elbows, I stopped and Bob the Builder took on the job of leading the second sub-group. He kept a gap between our two sub groups to allow overtaking cars a safe place to pull into, should the need arise.

Soon we had climbed upto Botley Hill Farm and the fast descent to the Pilgrim’s Way. Next the longer climb up Ide Hill. Here we paused to admire the view, looking down to Bough Beech Reservoir and the surrounding Weald of Kent. Nine in the photo, and the camera man, Tom Tom, makes 10!

Taking a left fork at Chiddingstone Causeway, most of my group were into new territory, along some lovely country lanes leading eventually after some 25 miles, to our tea stop at Hilden Golf Academy. Here we met up with Fran’s group and the 9.30 group led by Tom Vaz.

Our return ride started off following the B 2027. It was only a short ride to the lovely village of Leigh with it’s many historic buildings.

The manorial Hall Place at Leigh, was originally part of the estate of Penshurst Place. It was later granted to the Duke of Buckingham by King Henry VI. So it has a long history!
Surrounded by the grounds of it’s huge estate, Hall Place is hidden from view. But we were able to see one of the gate houses at an entry to the estate grounds. It is known locally as the Pepper Pot, due to its unusual shape and design.

We continued along the B2027 to Four Elms, and on to the the strangely named hamlet, Pootings, where we did a left. This took us over the main Edenbridge road and into Dairy Lane. Well worth a visit to see some beautiful old houses on the back roads towards Hurst Green. We did stop at one, the very old Moat Farm. It and the out buildings now much gentryfied, overlook a large pond which was originally part of the old moat.

The reason for taking this route home, was not to see all the many lovely old houses and farms (they are just a bonus!) but to avoid the various major climbs over the Green Sand Ridge, such as Toys Hill, Ide Hill, etc, etc, followed by the climb up to Botley Hill Farm. With our route the only major climb was up Flower Lane to Marden Park.