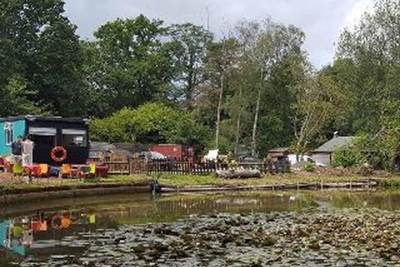 Just a brief note about our ride. We met at Shurgard hardly able to believe that it wasn’t raining. Numbers were surprisingly modest considering how good the weather was. Both John Dadson (Relaxed Ride leader) and I had decided to go out via Farthing Down so we rode there together. There were ten of us in total at Farthing Down so we split 5 and 5. Ian, Miles, Rob and Jim came with me on the steady ride, while John took Sandy, Tina, Des and Rob in his group. (Different Robs! But I don’t know the surnames!). We went over Hilltop, Springbottom Lane, Bletchingly, Outwood Lane, Smallfield to Horne, where we saw the 09:30 group briefly before they departed. The Relaxed group arrived shortly after us and Meike came as well. We had a pleasant lunch in the sun (still looking at the sky with disbelief!). Rob is obviously a perfectionist as he wanted to swap his front tyre around because it was rotating in the wrong direction! However, the rest of us were firmly in the “If it ain’t broke don’t fix it” brigade and persuaded him not to do this at the café but wait until he got home. We set off back via Newchapel, Longfield, Crowhurst, A22 dash at Godstone, then back via Flower Lane and Marden Park. Miles left us to go back a shorter route part way through our return leg, but we overtook him on the A22 deep in conversation on his mobile. I left the Croydon crew at the entrance to Marden Park and came home to Beckenham via Gangers, the Ridge, Botley, Nash and Coney Hall. Moving average about 20km/hr. 80km for me, probably 60km or thereabouts return to Shurgard. Roads surprisingly good in most places, a bit wet under trees, but no big flooded areas on our route. Group stayed tight and well disciplined the whole way.

And yes, I forgot to take a photo!