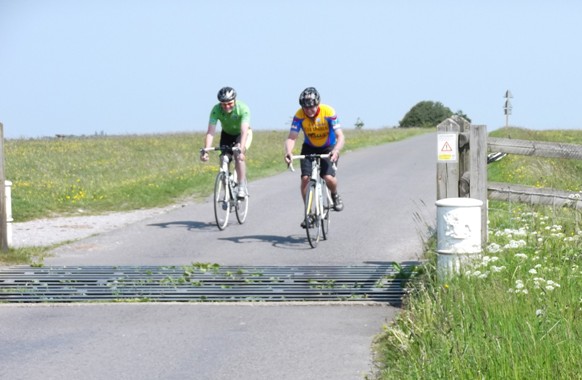 The weather for the first of the Thursday Rides of June lived upto its reputation – “flaming June” – the temperature getting into the 20’s, or 70 F for those old enough to remember life  before decimalisation.
We set off from Tesco, headed south and then ascended the climb up and over Farthing Downs. Here Dave and Philip can be seen approaching the second cattle grid. And note the blue sky, not a cloud in sight! From Chaldon we descended Hilltop Lane, over the motorway and took a right towards Merstham. Philip had spent the previous weekend with his family doing some off-road cycling in the New Forest, so I thought that we should make the most of this dry weather to explore the off-road delights of the NCR 21, that is the cross country cycle path which goes by the Merstham yachting lake. The off road path continues past the Inn on the Pond until we again hit tarmac and the climb upto Nutfield ridge. Then it was the next down, leading to the road around Redhill Aerodrome. This airfield played its part during all of the 1939/45 war when Spitfire squadrons were based there. It was the home base for some Polish and Canadian  squadrons, the latter providing support for the disasterous beach assault by Canadian forces on Dieppe in 1942.  The Dieppe Raid is commemorated each year by British cyclists at a weekend bike ride in the countryside around Dieppe. This event is organised by French cyclists from the Dieppe cycle club. Well worth a visit. I have ridden it twice. This year’s event 29th June to 1st July is detailed at http://www.dieppetour.com/  Perhaps an event for a future Anerley outing?
The photo below was taken at Redhill, but eagle eyes will recognise it as a Hurricane, not a Spitfire! Delayed slightly by road closures as a result of tree felling, and then by road works, we made it to our tea stop at the Horley Waitrose.  Here, over a cups of tea, a lot of time was spent discussing the long awaited, new Anerley cycle jersey. Philip has a background in graphic design (or something similar) and both John T and Dave have expertise in the print trade. So expect some news on this topic shortly. Or am I being too optimistic?

Then it was time to head for home. I again took my companions into the wilds of Surrey as we followed another section of NCR 21.  This bit of the wooded, off-road cycle path leading from Horley to Salford. Then to complete the circle we cycle around the western and northern perimeter of Redhill Aerodrome. This day’s ride was on the 6th June, which date in 1944 was D-day. Next week I am off to the Normandy beaches, the Mulberry harbour at Arromanche, and the Bayeux Tapestry.  So I won’t be out to lead the Thursday Ride. Those of you who do venture out, meet at Shurgard at 10. I am sure that one of you will be able to lead the way to a suitable tea room. So bon voyage!

One thought on “Thursday Ride:6th June”