June 2022 – Anerley BC attends the Cycling UK York Rally
By Peter Roberts with input from the rest of the party.

Tim Styles proposed going to the Cycling UK York Rally some time ago, and in total six of us from the club signed up to attend the rally and then stay on for a few days to tour the Yorkshire Dales. Tim and Sally Styles, Tom Vaz, Tomtom, John Eden and me. Tim did all the hard work of researching the event, campsites etc.

The York Rally has been running since 1945. We originally planned to go up on Friday 17th June and return on Thursday 23rd June, but we hit an early snag before we left when the train strike was announced. This did not affect our journeys to York, but it did affect our return journeys on the 23rd June. I use the plural journeys, because we were forced to divide our party onto two trains because you have to put your bike in a special compartment, and there are only four spaces available on each train. After numerous phone calls and emails to LNER, and a few days when we thought we would have to go by car, we decided to stay over an extra night in York and come back on Friday 24th, a non strike day, so we could still go by train.

We all made our way to Kings Cross by different routes and times. John, Tomtom and I were all booked on the 10:30 train to York. Tim, Sally and Tom Vaz were booked on the 11:06.

I decided to cycle all the way from Beckenham via part of the Waterlink Way, Peckham, Blackfriars Bridge. Set off at 7am, arrived about 8:15am, I walked around the KX area to kill a bit of time, when I returned to the station around 9am, John and Tomtom were already there, having got VERY early trains up to town before the 7am “no non folding bikes” deadline!

John had got up at 4.45am and caught the 6.34 train from East Croydon to Victoria. John arrived at Victoria at 6.50am, and since our train was at 10:30 he rode very slowly via Vauxhall Bridge and along the Embankment to Blackfriars then on to Kings Cross where he arrived at 7.50am.

We three early birds all had breakfast at KX and caught the 10:30 train to York, all our reserved seats and bike spaces empty! (Another cheeky cyclist managed to take his wheels off and fit his frame and wheels in with two of our bikes!).

On the way John explained various historical events that occurred on and around the railway line we were on, including the record breaking run by the locomotive Mallard.

At around 1pm we arrived in York, got all our bikes and stuff off the train successfully and set off on our first ride. It was tough, but after 500m (distance not climbing) we made it to the Punch Bowl, a Wetherspoons Pub, where we decided to await the second party. 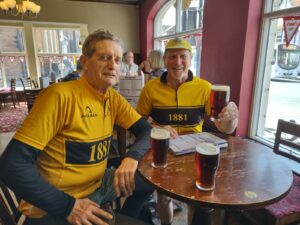 We locked our bikes together on the pavement outside the pub where we could see them from our table. While we were supping our pints of “Monkey Wrench” we noticed a suspicious character in cycling garb eyeing our bikes through the window. Keen to make this person aware that we had seen her, we waved and smiled in a friendly manner. This was reciprocated and we thought nothing more about it, until ……. We turned around and there was the lady standing beside us beaming at us. We exchanged a few pleasantries, and ……. Three hours later there she still was!

Our second party, comprising of Tom Vaz, Sally and Tim Styles, and their friend Fiona arrived and joined us about 45 minutes later in the pub. Slowly members of our party migrated to a different table to eat fish and chips and other fare, leaving me with the very interesting cyclist lady, who proved to have a completely encyclopaedic knowledge of everything to do with cycling, which she very kindly continued to explain to me, much to the amusement of the rest of the party.

Around 3:30pm we finished up leaving for the racecourse, which was about a mile or two away. At this point I was becoming increasingly confident, having successfully completed the first two rides of the trip, and done nearly two miles in total!

Sally and Fiona joined the check-in queue with all our credentials and signed us all in. In the queue they met a disabled cyclist who had hand-cycled his electrical assisted trike from Fishlake near Doncaster the 40 miles.

We set about putting our tents up in a very strong wind, and I applied all the advanced knowledge from my engineering degree to my tent, only to find that after ten minutes I had only managed to poke myself and several others with the poles, and my tent was still a pile of nylon on the ground. Fiona politely suggested that perhaps the blue pole went into the blue slot and the red pole in the red slot, taking the poles in hand and getting it up in no time! I sheepishly stood by and then finished off the tensioning and placement of the pegs, which was of course much more difficult and technical.

John also had problems with his cheap 3 man tent so Tom V and Fiona helped, but he was concerned because he had not brought any guide ropes and it looked like the wind would blow it away. Fortunately the wind was not bad during our stay.

We tipped our panniers into the tents and wandered around the site. It soon became clear that the York Rally is not exactly a “mainstream” cycling event, and many of the attendees were not your ordinary run of the mill club members. Every different kind of cycle was there, including recumbents, trikes, tandems, “ordinaries” (Penny Farthings), together with numerous classic tourers, classic racing bikes, trailers, hand cycles, and a 36 inch wheel bike. The attendees were equally diverse, spanning the full range from club cyclist to friendly eccentric. Consequently we fitted in perfectly.

We were later joined by Tim and Sallys’ friends Linda and Nick, who had also brought Fiona’s pop up tent.

The first evening we ate on site and entered the quiz as two teams, but unfortunately did not win.
The night was surprisingly cold, and several people had a cold night without much sleep. Luckily, I had brought the only sleeping bag I have which is a three/four season down bag, so I didn’t feel the cold.

The next day we got up early at around 6.30 am, some of us had cereals and hot drinks at the tent while others went to a food stall for bacon rolls and hot drinks. The wind across the racecourse was very chilling. Later on we decided to do different rides.

Fiona, John and Tomtom joined the retro ride organised by the Rally, a 30 mile flat ride. They stopped for a break after about ten miles at a small cafe that seemed to be someone’s home. John spoke to three cyclists from Lincoln riding Holdsworths, including a lady on a mixte frame. John explained that he was riding a Claud Butler made by Holdsworth, Holdsworth were made in Anerley, though his was made in their shop in Putney.

They cycled on to the next stop somewhere near Tadworth an up market restaurant with many outside tables. John, Fiona and Tomtom were joined at their table, by a Craig Horner and his partner, who they discovered knew our Des Donohoe, who had helped him when he was researching for a book on the link between Cycling and early motoring, there are many references in his book to the Anerley B.C and particularly to S.F.Edge our member who was a famous cyclist and motor car racer.

Was it coincidence that Craig was there, he lives in Manchester or does he read the Anerley website and knew we were going to the Rally? John never thought of asking him| You can buy Craig’s book here https://www.amazon.co.uk/Emergence-Bicycling-Automobility-Britain-ebook/dp/B08QVGR36FR

The Ride to Stamford Bridge

I chose one of the rides organised by the Rally which was about 40 miles, and went to Stamford Bridge. (This is where Harold WON his first battle of 1066.  Had he used LNER he may have got his army back to fight William a bit less tired, but they wouldn’t have been able to bring their horses back, LNER only carry 4 horses per train, unless they are folding horses.)  It was a good ride, but due partly to large numbers and partly due to lack of rider discipline, the planned separate sub-groups with car passing gaps deteriorated badly towards the end of the outward leg.  Lunch was a bit of a disaster, basically because the café was unable to cope with the large number of riders.  In comparison our rides are way better organised and much more disciplined.  The ride was nevertheless still enjoyable.  I went solo after the café, to visit the battle site, which wasn’t very exciting but I found an information board tucked away in a small housing development.  The leader of the ride was an amazing individual, he HAND cycled the whole ride at about 10-11mph.

In the afternoon after the ride John and Tomtom looked in at the bike auction many old frames of famous makes sold for £5 or £10, understandable because they would have cost enormous amounts to do them up, there were various stalls selling new and old bike parts. John had conversations with several wheelbuilders about some rare Saba stainless steel spokes, which only one had heard of.  John explained that they were around 50 to 60 years ago, and he had bought 4 boxes 30 years ago for £4!

The Ride to Egton

Tom Vaz went with Tim who organised a special ride to Egton in the Yorkshire Moors. With Tim on his heavy expedition bike, Tom had no trouble keeping up.

The morning started with a short train ride to Malton where we started a 50 mile loop which promised would be hilly.

Whydid Tim go his own way? To see something like this! Another BCQ point but at the top of a 33% climb.

Actually, the moors were just beautiful, with miles of open space but such astonishing hills – down 20%, up 33%, down 33%, up 20% in short succession.

Tim & Tom made it most of the way to Whitby before heading back to Malton where they (illegally) got onto a Trans Pennine train back to York. That company expects you to book your bike in a special space which of course was not possible.

That evening everybody except me met in the large Marquee for drinks and food from the on-site caterers.

I met up with an old work colleague who live in York, drank far too much, and was very grateful I had a wide necked bottle in my tent clearly marked “Eau non-potable”.

That day and evening was the York Pride event which included a very loud music event near to the Rally, which fortunately finished at a reasonable time. It was another cold night.