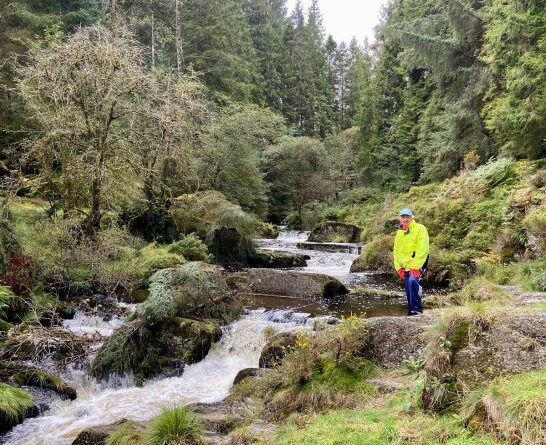 A HIKE IN THE HAFREN FOREST – SOURCE OF THE RIVER SEVERN

You will note that the above Walk/Run event starts and finishes at Clun. It finishes after 45 miles on the coast at Aberystwyth, passing on it’s way through the Hafren Forest. It is here, on the Plynlimon Massive, that a forest track climbs up to the source of Afon Hafren, the longest river in the UK. You may wonder why you have never heard of this river before. Well you have, except that we English know this Welsh river as as the River Severn! I had never heard of the the Hafren Forest or for that matter, Clun before, but my son and his wife have run/walked this event on more than one occasion. Hence we had a good guide on the continuation of our day out after the earlier short hike along part of the Kerry (Ceri in Welsh) Ridgeway. But whereas my son and wife continued running along the ridgeway, we went back to our car to drive to the Hafren Forest, much of the route was along cycle routes.

Back in the car we continued along the same B 4368 with views into the distance below. Shortly there was a long descent, great for going down on a bike but a real pig if cycling back to Clun!
Passing through the village of Kerry – or Ceri to give it the correct Welsh spelling – we joined some main roads to take us to the little Welsh town of Llanidloes. Here we joined NCR 81 briefly, to shortly join NCR 8. This cycle route is the most important in Wales, stretching from Cardiff in the south to Holyhead in the extreme north west. At this point it is a narrow little country lane which passes thru the Hafren Forest and the entrance to it’s visitor centre. It also provides road access to the magnificent Llyn Clywedog (centre of map below), which due to it’s shape is also known as the Dragon’s Tail Lake.
I have marked where the forest car park and visitor centre are located – with an arrow on left centre of the map by the blue number 2. You can just make out the dotted lines which mark the forest trails.

You may wonder what the Blue number 2 signifies. A clue is that the number is circled by the yellow stars of the EU. It is a signposted cycle route to identify it as part of Eurovelo Route 2 which connects with the port of Harwich. Last year (2021) on a summer bike tour down near Weymouth, we cycled along another part of Eurovelo 2. This bit linked to Poole Harbour and the ferry service to Brittany in France – another European connection!

But back to Wales and the huge man made, Llyn Clywedog. It holds the record of containing the highest mass of concrete of any dam wall in the UK. This massive holding wall is 236 ft high and 750 ft long. The lake is well worth a visit if time permits as it is so close to the main theme of our visit, to follow the Afon Hafred and it’s waterfalls up to it’s source in the Plynlimon Massive.

Having parked up in the forest carpark the 3 of us set off to follow the river back to it’s source. It was wind proof jackets on as there was now a cold and gusty mountain breeze!

Above we were crossing the highest cascade. My son, arrowed, indicates how great the drop is, up near the source of the Afon Hafren.
There are several Forest tracks so we were able choose a completely different route to return back down to the carpark. Having worked up a good appetite we headed back into Llanidloes where we found a nice cafe near the town centre.

After replenishing our energy stocks we went for a little wander around the town – a little wander because it is only a little town, but like all old towns, it has an interesting history. A little bit of which came to light as we walked past the Trewythen Hotel. Here we saw a blue plaque showing that it had been central in the town’s Chartist Riot in 1839. Continuing our walk we came to the old town water mill – now converted to luxury apartments. The mill, powered by the fast flowing River Severn, was originally built as a corn mill, but later became a flannel mill, because there was much more profit to be made for the wealthy owners, from spinning wool into yarn to manufacture flannel cloth.

It was from here that the mill workers joined the Chartist movement to demand civil rights, in particular, the right to vote in Parliamentary elections. The town’s “Riot” was just a protest meeting, as a result of which 30 men and 3 ladies were arrested. Two ring leaders were transported to Oz, a third escaped, fled to America and subsequently fought there some 30 years later in the American Civil War which revolved around the black slaves on the plantations. And not forgetting the other 27 men and 3 ladies, they were sent to prison for their part in the “Riot”. How times have changed!

It had certainly been a very interesting day with two hikes in very scenic and varied countryside, where we had learnt a lot more about the history and life of the peoples who lived in these hills along the English and Welsh border lands. An area, which in modern times, has become a mecca for bikers and hikers.