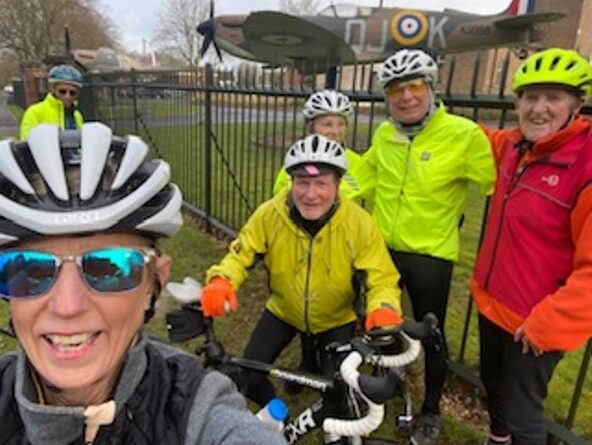 With forecasts of 60 mph gales and torrential rain, Storm Ciara hit with a vengeance on Sunday morning. Sensibly our ride leaders made the most of the weekend by instead, offering the choice of three rides on Saturday morning. Pete S led a short 32 mile ride to the Red Rum Cafe at Lingfield whilst Roger offered a 45 mile option for those who felt more energetic.
I led my group of 7 in a different direction, as we headed off to High Elms Golf Club for our tea stop.
Of note, we had a special guest rider. Moira had flown over from her home in Canada to come to the Anerley Club Dinner, and in view of deep snow back home, a bike ride on this beautiful sunny morning!

To make the most of this lull before the storm, and for Moira’s benefit, I decided to take a different route than normal to our destination. First we headed off towards South Croydon and just past the bus garage did a right to join the B road which climbs up to Selsdon. From there it was the fast downhill to Addington. Then, out into the countryside via Featherbed Lane, passing the White Bear pub.

Continuing on we had to stop for a photo shoot. Climate change is not only melting the Antarctic ice, but where has the snow gone from the North Pole!

At Keston Church, instead of heading directly towards Downe I continued along the main road to pass by Biggin Hill Airport. Time for another photo shoot, and for the Anerley few to remember the war time Few who won the Battle of Britain. First the Hurricane and next the Spitfire.

And then it was off to Jail Lane and the fast, flat section to Downe, followed by the down to the golf club’s tea room.

Although only a short, 30 mile round trip, the photos clearly show that we enjoyed the ride!