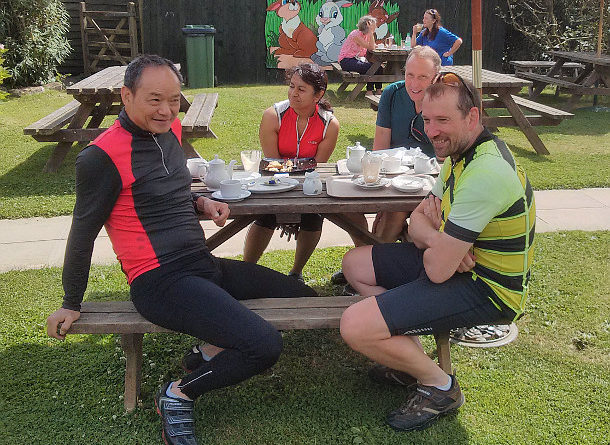 The Anerley headed into deepest West Sussex on Sunday, avoiding the cycling masses and road closures in and around Surrey as a result of the London 100 ride. The lack of fellow cyclists on the roads towards Turner’s Hill was very noticeable even the number of motorists appeared to be down. The route to Tulley’s Farm is very much north to south therefore the gang of 5 had a bit of a head wind to cycle into (but the joy on the way home!!!). One technical (minor) fault to report when Stuart’s front derailleur started playing up, fortunately is was self fixing!

The tea stop was all that could be asked for, cream teas, scrambled eggs & bacon, chocolate cake, enough to put the pounds on just thinking about it. We were entertained by mountain goats traversing a high level wooden walkway, groups of sparrows waiting for dropped crumbs and a petulant teenager who appeared determined to embarrass her parents.

For the lunch stop a collective decision was made not to go onto Horsted Keynes, but instead the imbibers among us headed to a hostelry at Tilburstow Hill. Another joyous ride around the roads and lanes of South East England.