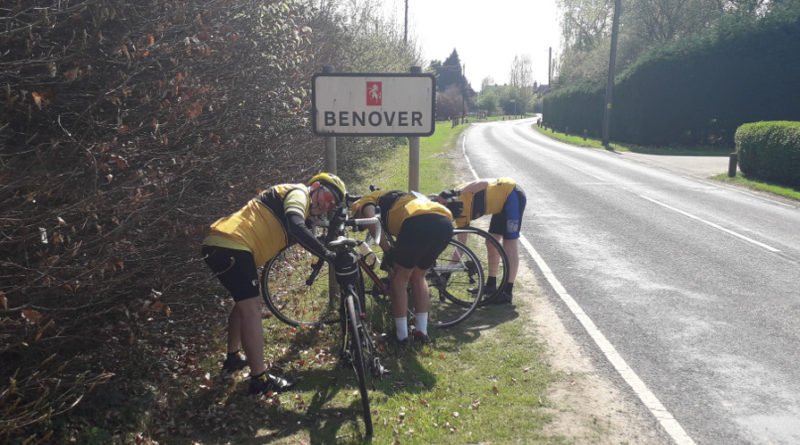 Six set out for the TeaPot Cafe at Yalding. The warm spring sun showeed Kent in its finest livery on Easter Sunday.

The downside was thet had an hours wait for hot food so cake was taken (or two cakes for some). The plan was for Tim to lead the ride back home but, in the event, only George chose to follow him. Even so they racked up 89 miles or so.

Mark was planning to ride on to visit a relative near Ashford. Three of us (TomTom, Barry & Stuart) chased after him after a brief Benover. Our objective was to do the imperial ton. Mark thought the Bell at Smarden would be a good place to turn.

This turned out to be a PUB WITH NO BEER (or Cider) having suffered the attention of the local point to pointers the day before.

We retreated back to a Pub with some rather nice fruity ale and cheesy chips before setting off in earnest for home through Marden and another squeeze past Highway England’s attempt to block the road near East Peckham.

While we came out via Otford & Plaxtol we took the flatter route back through Hildenborough with a tea/ale stop at The Greyhound, Charcott. We did the zigzag past Four Elms and Tandridge to ascend the third Marden of the day – Marden Park to end it all at Whyteleafe South, take the train and one to do another hill.