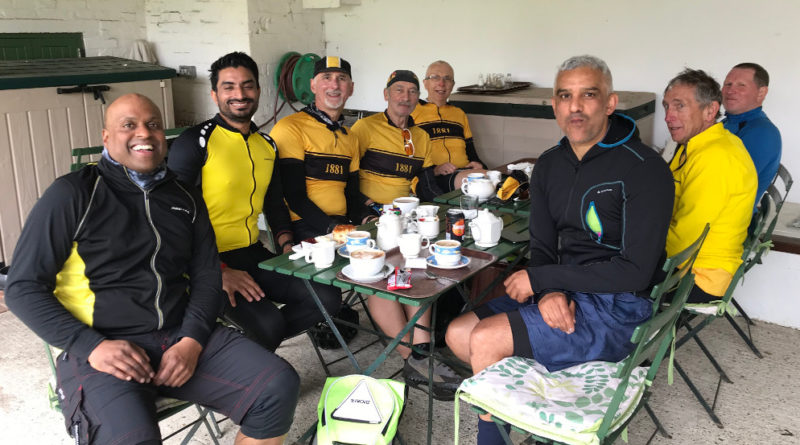 Mark was racing, Tom was indisposed so the poisoned chalice of leading the annual Anerley Brighton’n’back fell to me (Stuart).

Eleven of us started but we were easily outnumbered by the number of Minis also going to Brighton. Go here if you ever owned a Mini to see some of the really weird ones: https://www.youtube.com/watch?v=2zEEjvlbvA0

Tom & Julia had to turn at Tulley’s Farm to make a later concert engagement and Miles found his own way home as usual but the rest continued to take tea at High Beaches. This is what is used to look like (the tea/room/stable block can be seen on the right): 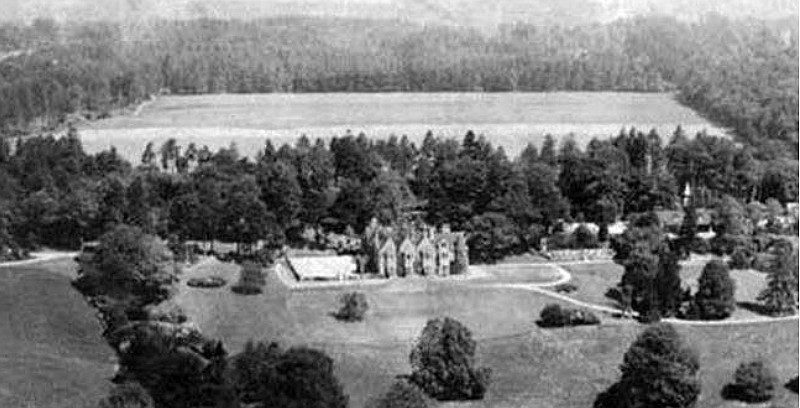 And this is what it looked like after an abandonded Canadian bomber returning from crashed into it on 11th March 1943: 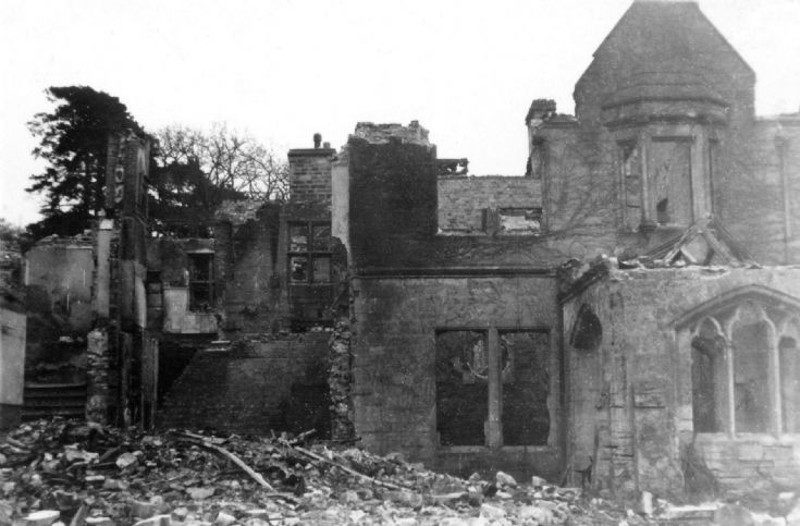 The family escaped but three maids living at the back were killed. The Slaughtham archives say: “Some reports of the incident say that the stricken Halifax clipped a large chimneystack bringing it to the ground. The pictures tell a more catastrophic story, no doubt compounded by a ferocious fire which swept through the building bringing down the roof and floors beneath.”

Needless to say the cake and tea were great value and unlike some venues there were more staff than customers. 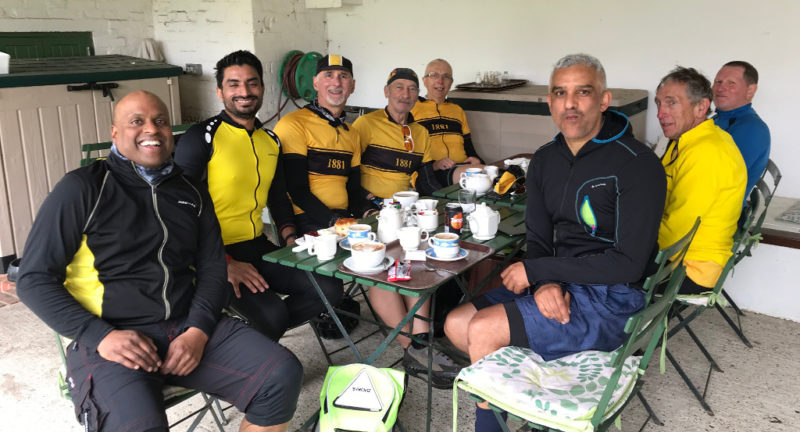 We continued on the same route as last year through Handcross and lost TomTom who followed the signs on to the A23 cycle path. He missed the glorious ascent of Devil’s Dyke with obligatory photocall at the 650ft marker. 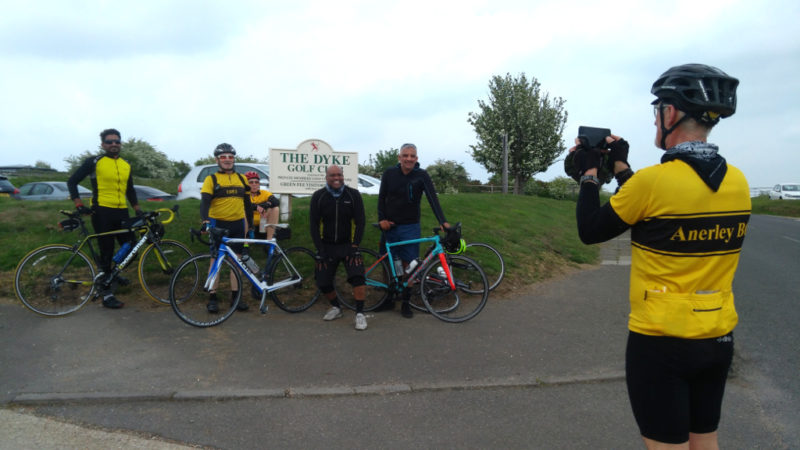 Four took the early train home but three dined at the excellent Regency fish, chip and other delights restaurant on the sea front. We expected TomTom to be waiting for us – but he had been delayed by two punctures and a slow due to the shocking state of the cyclepath: 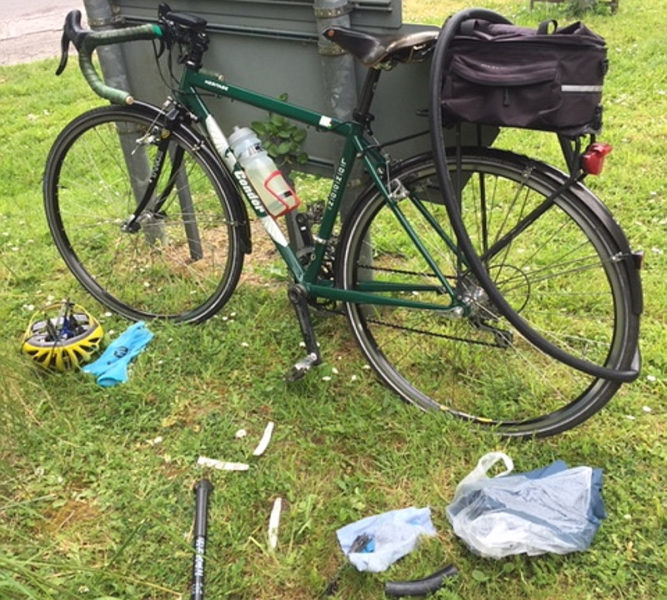 Eventually he arrived and escorted Peter R back to the train station leaving Barry and myself to ride home. We decided not to take that horrid climb out of Brighton to go down Ditchling but risk the dangers of the A23 cyclepath. It was disgusting in parts with deep mud sitting on top of tarmac but TomTom must have piacked up all the errant thorns so we luckily escaped the puncture fairy.

We came off at Handcross and decided as it was getting late to take the direct route back through Creepy Crawley. Wishing to avoid the A23 dual carriageway around Gatwick we through ourselves at the mercy of Mr Google who led us through an interesting selection of industrial estates and onto NCN 21. This would be the very first view of it from our overseas visitors who disembarked at the airport: 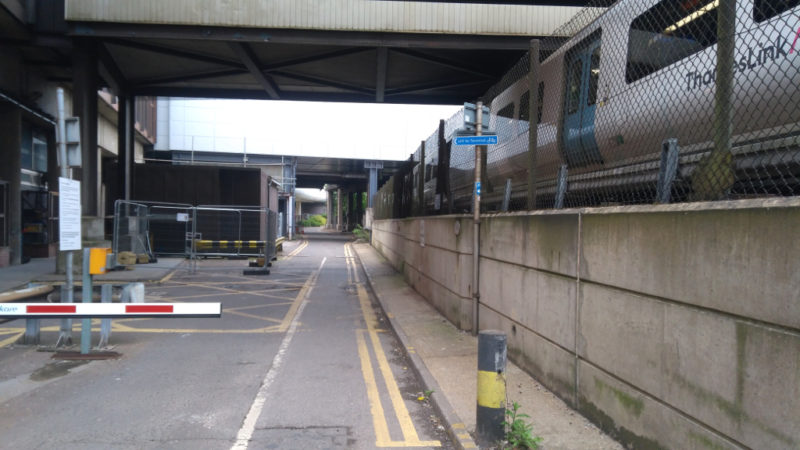 Mr Google then led us along some intersting and excellent cycleways to Horley before unceromoniously dumping us on to an awful untarmaced pot-ridden track. At the end we forsook the remaining NCN 21 and enjoyed the beautiful crisp tarmac of the A23 through Redhill and home.

Back at 8pm with 105 miles on the clock. My GPX tracker broke down so here is last years track which we followed out but not back: