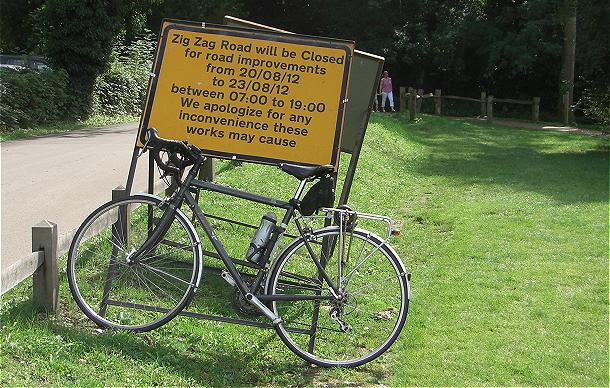 The hottest day of the year forecast so thankfully this ride was not planned as a long one. Only four of us were at the start. We took the usual route via Chipstead Valley and down Pebblecombe. It never tires with the prospect of the chocolate box views across the Surrey countryside to and through Brockham.

Down Henfold Lane we saw a bumblebee ahead going like the clappers. We never quite caught him before Henfold Lakes. Des must have grown new legs in Spain. So now we were six with the arrival of Brian P. After tea we wimped on the mountain route and rode around the hills via Capel and Holmbury St Mary to The Volunteer at Sutton Abinger to take the view (above). Our two naughty boys had split of to buy nourishment in the village. Hence the defensive sign by the landlord: As further punishment the blue skies had disappeared to be replaced by an instant summer storm, thunder, lightning and a deluge. Huddle inside the pub we took refuge in another Badger or two. However, as quickly as it had arrived it disappeared and the roads quickly dried. We set off via Friday Street. Jeremy found the right left turn (!!!) this time to take us down to Wooton, Dorking and Box Hill. We had sampled the new smoothy tarmac a week before the Olympic Road race going down. Now we enjoyed a smooth ascent. The Sun was now shining – what could not be right with the world? This sign gives a clue: Improvements? The return of the speed humps is what we think. Why don’t they just ban motor traffic on the hill?