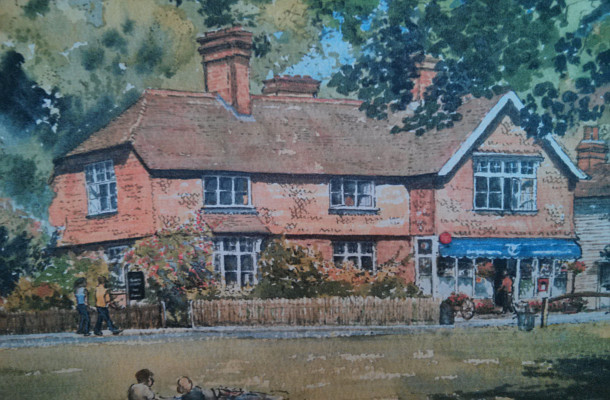 No Capt’n Jim today and at 9 sharp the senior British Officer, fresh from his victorious freewheel, was appointed day leader. Five of us set sail for Abinger Hammer picking up Jeremy and losing Ewa between Purley & Coulsdon. Re-grouped we prepared for the ascent of Chipstead Valley only to take an extended rest as Ewa attended to her rear wheel and whether it is best to invert or not invert the bike to salute the attendance of the P. Fairy. Onward and upward and then past Pfizer to Box Hill and its usual crew of crazy cyclists doing silly things. Westhumble Station saw the start of the ever increasing climb up to Ranmore Common (oh for the easier Denbies route). At the top we waited and waited. Eventually Ewa appeared with a very soft front wheel. It got softer and a couple of hundred yards later we took a second break …

We finally arrived at the Abinger Hammer Cafe rather later than expected. It was full of … other cyclists! The Cafe’s reputation for glacier paced service was further strengthened by a 50% reduction in waitress levels. We waited, and waited and waited. The picture below is taken from their menu. Eventually about 12:30 we had gulped down the tea and cake and were ready to roll. Three of us decide to push on the short up’n’over to the Pickled Parrot at Forest Green. £4.95 for beer and crisps.

Corinne was there to meet us. The lateness and the lack of lights persuaded us to take advantage of her motor and cycle rack for a speedy trip back to to Kenley.