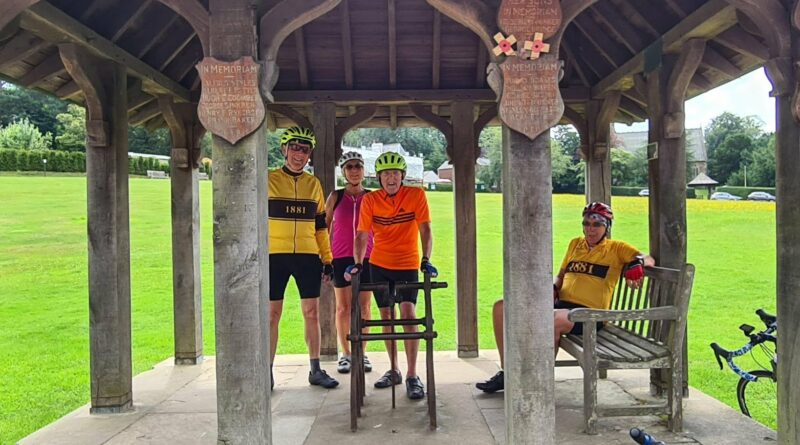 Unusually for this summer of 2021, we started our ride in sunshine! Taking advantage of this break in the month’s record breaking rain statistics, I decide to take my group along what I hoped for them would be a new route to Penshurst Place.

We took the usual route out – past Botley Hill Farm and along the Pilgrims Way, but instead of turning off into Brasted to go up New Rd to Ide Hill, I continued along the Way to the turn off to Sundridge, to climb the old and original road up to Ide Hill.
When I arrived, panting, my group had already rested and were raring to go.

Well, well, well! Actually it is not a zimmer frame but the supporting frame for the pump handle at Ide Hill’s old well, as shown on this plaque

Having recovered, I then led our group off to Goathurst Common, and a bit more history. This time Anerley B.C History!
Earlier in our ride along the Pilgrims Way we had crossed over Westerham Hill, the very steep hill which leads upto Biggin Hill and onwards to London. This hill was the venue for the very first Hill Climb race started in 1887 by Catford C.C. In later years due to modern day traffic, their challenging hill climb was moved to York Hill, the top of which comes out on Goathurst Common. And just to prove it!

But the historical connection with Anerley B.C? Another well!
Well, I mentioned that the first Catford Hill Climb was held in1887, what I did not say was that this most challenging event in the days of penny farthings, was won by a young lad, some 17 years of age, who happened to be a member of Anerley B.C! Yes it’s true and you can read all about it here! https://anerleybc.org/edging-ahead/

But getting back to our bike ride. It was at this point at the top of York Hill that the heavens opened – hence Delmar’s natty white jacket! Fortunately at this point our road continued through thick woodland which provided good cover from the rain. So we continued on and after right turn came to Bayley’s Hill, which truly is a hill!

At this point, with wonderful views of the storm drenched Kent Weald stretching out into the distance, we had to stop and try to find shelter under the trees. After quite some time the rain eased off a bit so we decided to divert to the nearest tea room – The Barn, now the Bistro, at Four Elms. When we eventually arrived there, the sun was out!

Note the vacant chair in the photo above. This was where Shakil was sitting before he took this photo. He also took all the other photos, hence he does not appear in any of them. I am indebted to Shakil for all these excellent photos, without which I could not have written this little story about how the rain stopped play!
Des