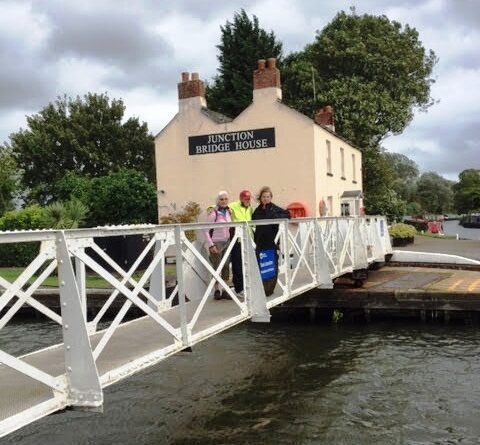 The national lock down, due to the corona virus, ruined our plans for a week’s cycling in Wales. With the easing of the lock down in the late summer, 8 of us did a day tour around the Isle of Thanet. Five of us then stayed on to make it a 3 day mini tour of the Kent coast and countryside – see https://anerleybc.org/a-white-cliffs-bike-ride/

This was such a success that 4 four of us, myself and Tom tom, Sue Smith and Jo Rifaat decided to do another 3 day mini tour from Stroud.
But why Stroud?
Well Stroud is in the Cotswold Area of Outstanding Natural Beauty and only a 2½ hour drive from Purley. It is situated on the River Frome, with 4 smaller rivers feeding into it from the surrounding hills. These hills with their magnificent views, are the foundation of an Iron Age track way, part of which is now identified as the 102 mile long Cotswold Way. Heading west from Stroud the River Frome is shadowed by the Stroudwater Navigation, a canal built in 1779. Both of which feed into the River Severn only a few miles away. Much of the old canal tow paths are now cycle routes, and flat ones! They also provide something interesting and very different to explore.

And the area is steeped in history – Neolithic long barrows, Roman villas, medieval castles, Tudor houses, and the homes of today’s Royalty. So lots to see, and not forgetting all those challenging climbs up the Cotswold’s many steep hills!

But the best laid plans of mice and men often go awry. And that turned out to be a fitting description of our little adventure!
With hotel booked and paid for, we had decided to set off by car at 6.30 in the morning to avoid the heavy traffic on the M25, M3 and roads heading out to Reading to join the M4. This would get us to Stroud by about 9 in the morning and allow us a full day of cycling after arrival.
But the weather had other plans!
The hot and glorious sunny weather of this summer ended with the arrival of Storm Francis and it’s torrential rain and storm force winds. So instead of an early start we set off at 9.30 after the morning’s rush hour finished. In the pouring rain, Tom and I squeezed our luggage and 2 bikes into my small car and we set off. Not a pleasant journey, starting with heavy rain, then subsiding to sunshine, showers and a buffeting from the building wind gusts of Storm Francis.
Past Cirencester we were enjoying the ride – now sunshine and the rolling countryside of the rural Cotswolds. So time to contact our two companions and rendezvous for a tea stop.
Knowing from Google that the Glider Cafe (with a nice photo) was only a couple of miles ahead, we arranged to all stop there before finally heading into Stroud.

Tom and I had no problem finding the Glider Cafe because it was on the main road, opposite an airfield used by the Stroud Gliding Club. However what Google did not show, was that this “rustic” cafe was just a truckers’ greasy spoon in a layby. So we all kept going!
Down the very steep and winding hill into the gorge cut out by the River Frome, we came to the more welcoming Lavender Bakery. Pulling into it’s narrow, roadside parking space, gravity and the slippery wet surface conspired to almost result in a brush with the adjacent stone wall. This heart stopping moment was all to no avail because the nice little tea room, due to Covid 19, was only taking pre-booked customers.
So onwards again, and we were soon passing what had once made Stroud’s merchants rich. – wool and the manufacture of the high quality broad cloth, known world wide as “Stroud cloth” And especially for the production of military uniforms dyed in the colour “Stroud Scarlet”.   Think of the Trooping of the Colours and other precision military parades. Doesn’t it make you feel proud to be British!

So third time lucky, or unlucky as it turned out, the cafe in the grounds of Stroud’s lake side mansion was, due to the virus – moth balled – so we headed for our hotel to book in. Here, we eventually managed to get a light lunch.

After our lunch, the now strong gusts of Storm Francis, determined that a bike ride was clearly out of the question. However, Sue volunteered to brave the storm and drive us around our intended circular bike route to explore some of the canal network, linking to the River Severn

Heading north took us up a wooded B road, climbing from the valley of the Painswick river and up to the number 4 on the above map. Here just visible is the name of the hamlet, Edge. It literally is on the edge of the ridge top escarpment, overlooking Painswick. Here we hit our first problem. The intended route, following a very steep descent from the ridge, down a car width narrow lane, was blocked by a “Road Closed” sign. So we headed back to the B road and followed it into Gloucester. Here again our route was barred. This time by a bevy of police vehicles.
By a team effort of map reading and use of mobile phones, we eventually found a way back onto our intended route, at Hardwicke, but passing yet another access road blocked by police cars The closed roads were almost certainly due to something similar to this!

Now back on track, we came to Sellars Bridge to cross over the Gloucester & Sharpness Canal

This country lane, part of NCR 41, paralleled the canal and took us briefly to cycle along side the wide expanse of the River Severn. This lead us to our afternoon, canal side tea stop at Saul Junction. This is aptly named because of it’s original use when canal barges were towed by horses.

We had a pleasant surprise when asked if we wanted to sit in or takeaway. In view of the gale force wind the choice was obvious. We then got a 50% discount under Rishi’s ” Eat Out to Help Out” scheme! After that we explored a bit of Saul Junction, once an important part of the this canal network, which eventually stretched from Bristol and Gloucester docks to the heart of London.
Unfortunately the information Centre was closed (Covid 19 again!) but there were plenty of detailed information boards to read like this one.

It all started in 1779 with the opening of the 8 mile Stroudwater Navigation. This allowed coal from the mines in the Forest of Dean to be shipped down the River Severn and then up the Stroudwater to be used to power Stroud’s mills. On the reverse leg, the high value cloth from the mills could be shipped out to a world wide market via Bristol and Gloucester docks.
Ten years later, in 1789, the Thames and Severn Canal opened. It provided an extension to the Stroudwater to Lechlade. Lechlade being on the River Thames, the new canal formed part of a much quicker, cheaper and safer through route to/from London, Bristol and Gloucester Docks.
The Severn link was improved by the opening in 1827 of the Gloucester & Sharpness Canal which links with the Stroudwater/Thames and Severn canals at Saul Junction. Hence it’s importance!

It is hard to visualise what this now quiet backwater must have been like 200 years ago, when here, horse drawn barges met with the tall masted sailing ships arriving and departing with cargoes on each high tide. And the sweated labour of the dockers who had to manhandle the goods between ships and barges. Today the Junction is a place of leisure, being principally, a marina and mooring place for pleasure barges.

Continuing our bike ride by car, we left Saul Junction by it’s bridge over the canal and were now on another cycle route, NCR 45, which would take is back to Stroud. But first I had to show them Stanhouse Court Mansion, now an up market hotel, but in the time of William the Conquerer, the Stanhus, which I referred to in one of the earlier photos above,

Hardly having taken this photo, the heavens opened and we had to sprint back to Sue’s parked car. And so the rest of our tour was cut short before we were able to climb the Iast hill of the intended first day’s bike ride. But below is the route profile.

At the left end, our climb up to Edge on the very edge of the escarpment. The centre section is the flatlands from Gloucester, following the canals and River Severn. Rain stopped play and we headed back to our hotel, just before we reached the hills shown at the righthand end of the profile.
Note (just above the final climb) the maximum gradient is shown as 18.9%. This, the pleasure, or pain, we were to experience on the next day’s ride!
So Day 2 to follow, shortly. Des.