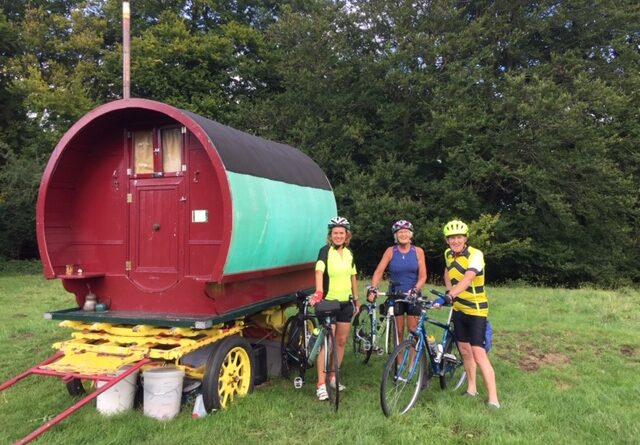 What a difference a day makes!
After yesterday’s battering by wind and rain the next morning promised a great day’s ride. The wind had dropped and now it was light cloud drifting across a blue sky and warm sunshine. Perhaps a last opportunity to top up the summer tan!

However today’s ride was going to be a challenging one, with climbs up some of the steepest hills in the area. But well worth it for the scenery, the views, the venues for tea and lunch stops. And not forgetting the history, stretching back some 5,000 years.
And this was our circuit to Tetbury (at number 22, bottom right hand corner) and back to Stroud.

Leaving our hotel and to avoid the town centre traffic, we followed some minor back roads which took us onto the Stroud Navigation. The tow path, now a cycle route, took us to the Wallbridge Lock where we turned off to briefly join the main A46.

From the busy A46 we soon crossed over NCR 45 (red dots between Nos 2 and 3) which followed a nice flat disused railway line. Whereas, we had already started our first major climb of the day!
Up and onto Selsey Common, following the B4066 all the way to our first tea stop at Dursley (just before No.9). The steepest bit of the climb up to Selsey Common max-ies out at 18.9%, according to sat-nav and it certainly felt like it!
After a couple of miles or so it levelled off so we stopped to celebrate and enjoy the view.

Somewhere between Nos 3 and 4, we did a bit of off-road to link up with the ancient trackway of the Cotswold Way, from which there was a view of an expanse of the River Severn, way below in the distance. It is said that 2’s company but at this view point . . . . . . .

Cycling along the Cotswold Way to get back onto the road, we came across the perfect place for an over night stop. That was, until Jo stepped in a rather large and soft cow pat and decided that perhaps it was not such an idyllic spot after all!

The road now followed a most scenic route along the very top of the escarpment, but the steep drop on our right was now hidden by thick woodland. It was a route well trodden over the millennia, as proven when we came to a spot at around No. 5 on our route map. Here, through an opening in the trees, was a flat and grassy field on the very edge of the escarpment overlooking the Severn Vale. Opposite was a layby which we pulled into. The view across the field opposite showed this . . . . .

A bit of previous research informed me, that it was officially named the Uley Long Barrow after the nearby village. It is one of several Neolithic, burial mounds in this area. They are over 5,000 years old and another one, nearby at the village of Nympsfield, when excavated, contained the skeletons of 17 men, women and children.

The first archeological study of the Tump in 1835 and more since, have found some 15 to 20 human skeletons together with animal bones, suggesting some forms of religious activity related to the dead. Also found were Roman coins, pottery and other artifacts, suggesting a continuation of use of this religious site some 3,000 years after it’s original construction.
But our attention was taken by something much more modern!

There were three sleek and very 21st century gliders circulating around overhead. These were using the strong up draught of air as it swept up and over the steep escarpment, providing a continuous lift whilst the current weather prevailed. These had probably taken off from the airfield we had passed the day before, on our way into Stroud. The one with the “rustic” Glider Cafe, truck stop opposite.
After watching this silent and fascinating aeronautical display we continued on for about another half mile to No.6. From here we began a long and exhilarating descent from the ridge top, down into the valley of the little River Cam, through the village of Uley and onto the old Cotswold market town of Dursley.
Here at a roundabout as we entered the old town centre, I took an incorrect exit, but fortunately Jo was paying attention to her Garmin, and called a stop before we got totally lost!
Soon back on track we navigated our way through the town, to exit via another B road – the B4060 and which took us past a very nice garden centre (at No9) – The Leaf and Ground – with a very new and excellent indoor cafe and outdoor patio. Being a sunny morning we chose the latter!

After this pleasant and restful break we were energised for the next stage of our journey and another challenging climb – the Dursley Ladder!
Des