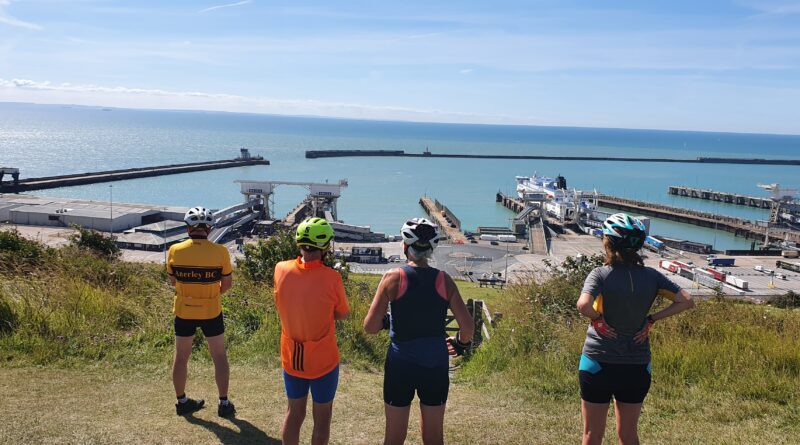 After our day’s ride following the Viking Coastal Cycle Route, see https://anerleybc.org/around-the-isle-of-thanet/ , five of us (Sue Smith, Jo Rifaat, Tom Vaz, Tom Tom and myself) decided to stay on and spend two more days enjoying the Kent coast and countryside. Where better than heading the few miles south east to the historic port and white cliffs of Dover!
Dover has something else of interest. It is the start of the longest cycle route in the UK. National Cycle Route 1 starts at Dover and continues for 1,264 miles to end in Scotland, north of Aberdeen and Inverness. But we were not going that far!

An added spur for our extended stay, was that the restrictions as a result of Covid 19, were beginning to be relaxed. To encourage customers back, Premier Inns were offering half price accommodation. Something not to be missed even though their restaurants and bars had not yet reopened!
So bikes were soon loaded back into or onto cars and in half an hour we were at our over night stop on the heights, above and not far from Dover’s Eastern Docks.

Of course, you get what you pay for, and the hotel restaurant being closed, we did have a problem finding somewhere for our evening meal. After much chasing around the country pubs we were eventually directed to a very nice Italian restaurant in Dover’s town centre. Here Jo was able to charm the waiter with her fluent Italian and us with her choice of Italian wine!

The next morning was another scorcher, blue sky and blue sea, so we stopped after a few minutes ride from our hotel, to see the view from this high vantage point. Although a bit hazy we could make out the darker form of the French coast, only 21 miles away. Then it was onwards to Dover’s most famous site – the Castle!

What we see today has evolved over more than 2,000 years. It’s commanding position was utilised long before the Roman’s built their fort here. And today, within the castle grounds there is still the Roman Pharos, an early light house, built to guide ships into the Roman port, down below in the deep valley of the River Dour – or DOVR as the Romans would have spelt it!
The centre point, a Norman castle, has been further fortified by outer rings as new weapons and battle tactics evolved. Not the first underground defensive works, but the latest, is the extensive complex of World War II tunnels built into the chalk cliffs below the castle. These even include a military hospital and the War Planning Rooms where the evacuation from Dunkirk was planned in 1940.
All of this is open to the public, but unfortunately the castle and grounds were closed due to Covid 19, so instead we went to see another bit of Dover’s history beside the castle – the Bleriot Memorial.

In 1909, Lord Northcliffe, the owner of the Daily Mail, offered a £1,000 prize for the first person to fly across the English Channel in an aeroplane. Quite a feat considering that the first flight of only 100 yards was in 1903 by Wilbur Wright. But only 6 years after this first flight, Louis Bleriot successfully achieved this bit of aeronautical history.
Above, we are standing by the tail of a full size representation of the aeroplane that Louis Bleriot flew across the English Channel and which landed on that spot on 25th of July 1909 – almost exactly 109 years before the very day of our visit!

Continuing on along the road which led us to the memorial we came to the National Trust’s White Cliffs Visitors Centre – a lovely new tearoom here, but too early for us as we had only just had our breakfast! However the main attraction here is not the tearoom but the sea and harbour views.

I worked in the Port of Dover in the 1960/70s. At this time of year at the Eastern Docks, there was then, a ferry arriving every 20 minutes 24/7. Now due to Covid 19 and the ban on overseas travel there was just one berthed ferry. Out of the photo there was another indication of the havoc that Covid 19 is causing. At the Western Docks there was a solitary ship, a cruise liner tied up with no hope of setting sail again until, at the earliest, next year. Going back in time, at the Western Docks there were hovercraft arriving every hour of daylight; train ferries and passenger ferries, each arriving/departing every 4 hours day and night; plus cargo boats on every tide. Now it was like a ghost town – dead!

After watching a solitary ferry arrive and reverse into it’s berth (not easy with these monsters and no brakes!) we were off again, along a cliff top road, past the South Foreland light house, to St Margaret’s Bay. Here we found a little tea room open, so we stopped for a cuppa before heading inland thru some of Kent’s old villages, before heading back to the coast at Kingsdown and next stop Walmer with it’s castle.

At last we got Tom Vaz in the picture, rather than taking the picture!
Originally one of three adjacent castles built by Henry VIII to protect against an expected invasion by the French, it is now the official residence of the Lord Warden of the Cinque Ports. Until about 100 years ago the Lord Warden did live there, but now it is more an honorary title and the castle with it’s armoury and period furnishings, its beautifully kept garden and grounds is open to the public. Well worth a visit!

Just up the road, Walmer seamlessly joins Deal, with the second of Henry VIII’s adjacent castles. This remained for much longer as a genuine military, defensive castle. Now of course obsolete in that function. As you can see, it did not deter the invasion by Anerley BC! So in recent years it became just a visitor attraction.

Deal’s military importance later resulted in the establishment of the Royal Marines Barracks. These were bombed by the IRA in Sept 1989. The large device caused a 3 storey building to collapse, killing 11 marines and injuring another 21. Now the barracks has been converted into luxury, private apartments. It is however a lovely building for such a sad history. Susan has visited someone at the barracks in times past, so it was only fitting to get a picture of both!

Fast forward along the NCR 1 a few miles, and we came to the ancient Cinque Port of Sandwich, one of the best preserved medieval towns in Britain. Located on the River Stour it was once an important and major port on the river’s estuary. Hence it’s title of one of the historic Cinque Ports. Dover of course being another.
Over the past 1,000 or more years the river and it’s estuary have silted up so that today Sandwich is now some distance from the sea. The town was protected from seabourne raiders by a draw bridge over the river and a fortified and gated barbican. In more peaceful times the river crossing became a toll bridge. Tolls being collected at the barbican shown below until the 1970s, when increased traffic caused long delays as tolls were collected.

Due to covid 19 restrictions, finding a place for lunch would have been a problem. But luckily we found a delightful tearoom with tables in an outside courtyard, allowing it to continue to trade. As you can see it was very busy but Jo again came to the rescue as we were being turned away. She noticed a family about to leave a table and grabbed it before anyone else could get near it!

So after being fed and watered, we did a short circuit of this little medieval town before setting off on our return journey to Dover, via a network of country lanes and old Kentish hamlets. Along these I got hopelessly lost, but by luck found a sign post which was a great help to both me, and hungry travellers in search of a takeaway during these covid 19 restricted times!

But there was one more place that we had to visit – Betteshanger Adventure Park.
Up until the 1980s there was a thriving coal mining industry in this area. The first coal mine was opened at Dover in 1896, tunnelling out 400 feet under the English Channel, but it had to be abandoned due to flooding. Other deep mines further inland were more successful, Betteshanger (over 3,000 feet deep) being one of them. The whole and very extensive site has been cleared to create an adventure park. The only visible sign that this was once a coal mine is the bronze memorial, below.
My next door neighbour was a miner, it was heavy work, hot, dirty and dangerous work, and like the statue they always toiled, stripped to the waist

But what makes this a must visit place is that the park is a mecca for cyclists with road and mountain bike circuits, even a velodrome!

And of course, as expected it had fuel for hungry/thirsty cyclists so we stopped for a final coffee and ice cream before heading back to our hotel.
Des.