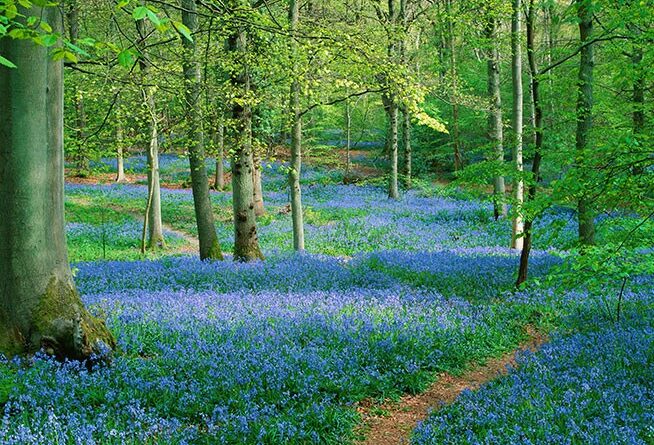 The first edition of the new Gazette was inspired by 2021 being the 140th anniversary of the Anerley Bicycle club.  But I have just remembered another, perhaps more important anniversary. The year 2000 Millennium, it being the first millennium anniversary in the life time of Anerley B.C. And we won’t be around in 979 years time to celebrate the next Millennium!
So with Spring Time now upon us, perhaps it might be a good idea to reintroduce an idea for some Club rides from an Anerley Gazette article from the year 2000 – The Bluebell Rides!

The writer explained:  “It was a Sunday Ride on the 26th April, a perfect spring day, warm and sunny, a blue sky as we climbed the hill up from Westerham and over Hosey Common, on route to our tea stop at Chiddingstone.  And what an impressive sight were the steep wooded banks of Hosey Common Lane, covered as they were with a massive carpet of beautiful bluebells to compliment the blue sky”.
But Hosey Common Lane is only a small part of the bluebell woods in our Kent and Surrey countryside.  The best bluebell wood by far is the famous Staffhurst  Wood, through which some bridleways pass. This allows cyclists to explore the outstanding bluebell panorama. The photo above having been taken there.
So  Ride Leaders, get the maps out and plan a route to and through Staffhurst Wood https://www.surreywildlifetrust.org/nature-reserves/staffhurst-wood

There are plenty of other good bluebell woods for other rides during the flowering season from mid-April to late May, depending on weather conditions.

Following on from the bluebell season, Rhododendrons also put on spectacular flowering displays from spring to early summer.  So the writer of the above Gazette article in the year 2000, went on to say:

“There are many country houses with gardens open to the public, some of which are famous for their displays of rhododendrons. Nymans, Sheffield Park and Wakehurst Place, being examples.  However, if you choose the right routes, cycling the highways and byways of the Weald will allow us the opportunity to enjoy colourful, massed blooms for free!
Perhaps the best free display of rhododendrons, is along the B2110 from Handcross towards Turners Hill and Balcombe – a spectacle not to miss!”
The writer continued, “On Sunday May 28th, Ewa our Club Vice Captain we be leading a ride to Fordcombe. On the return leg we will be passing through Chiddingstone Hoath.  Here, there is a wonderful display of rhododendrons where the road passes through a cutting in the sandstone. And another on the steep wooded bank, opposite the entrance to Chartwell, at that time of year. This woodland scene should also be a kaleidoscope of rhododendron blooms.”

So Ride Leaders, something worth seeing over the next couple of months!