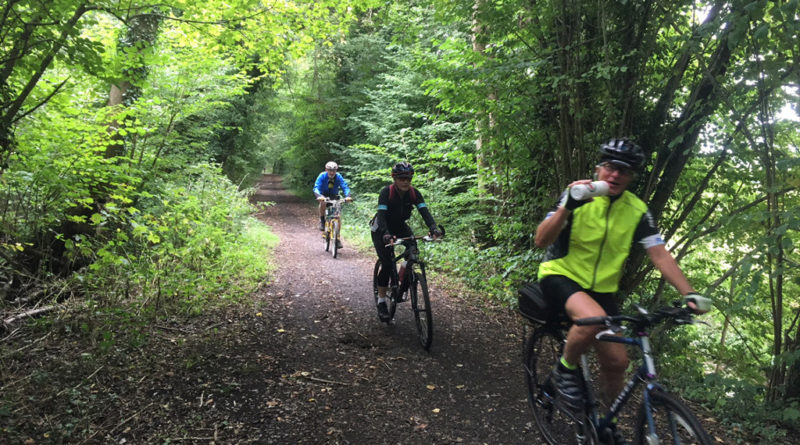 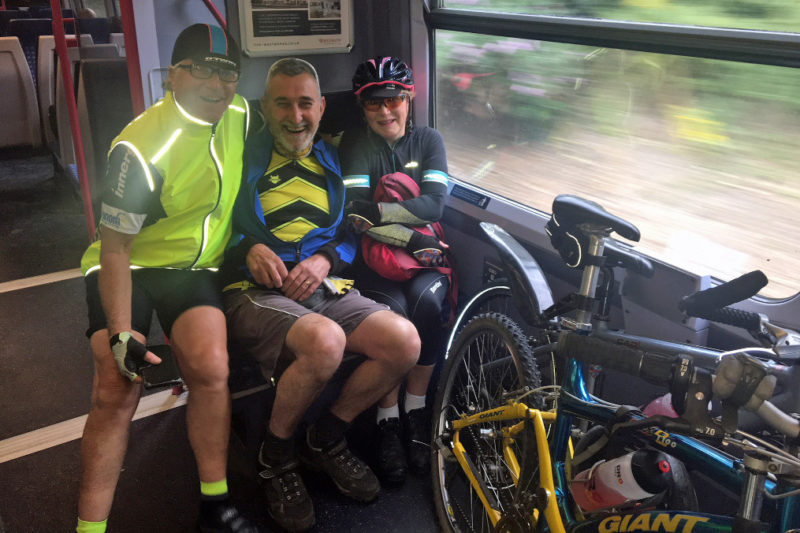 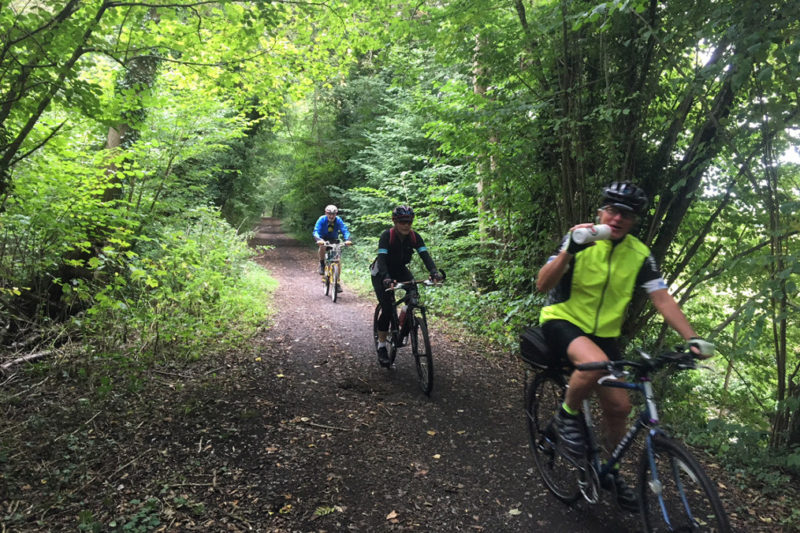 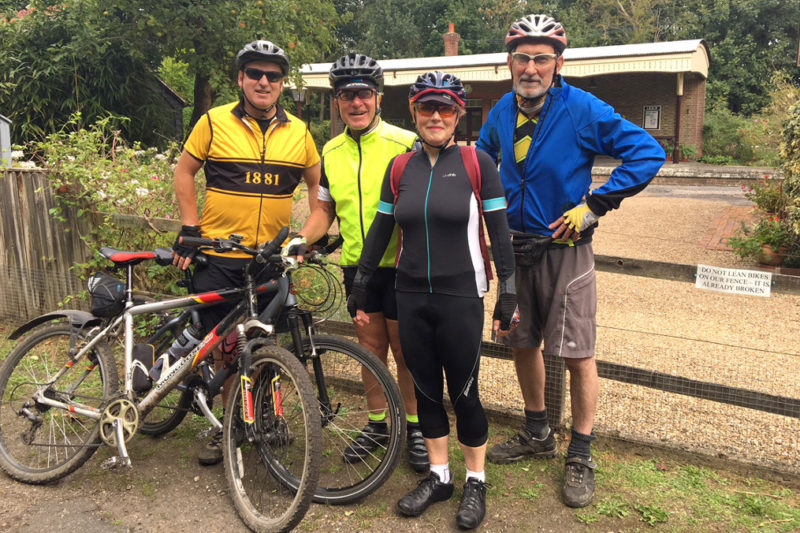 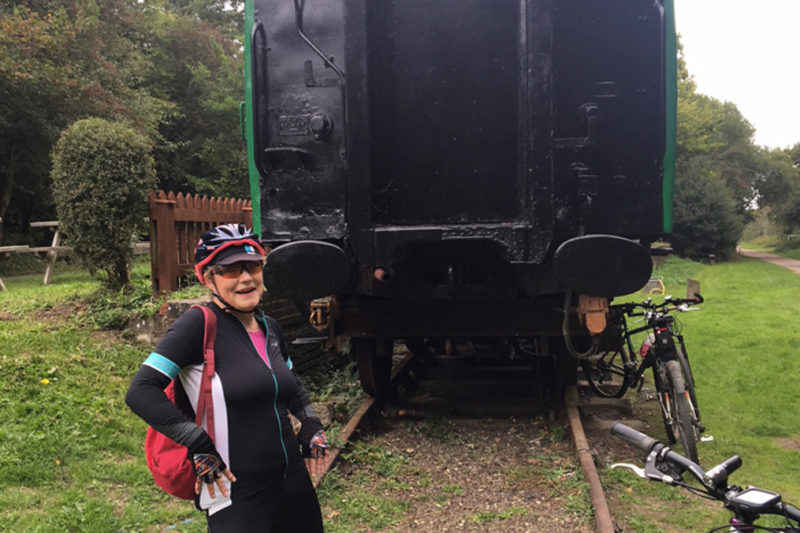 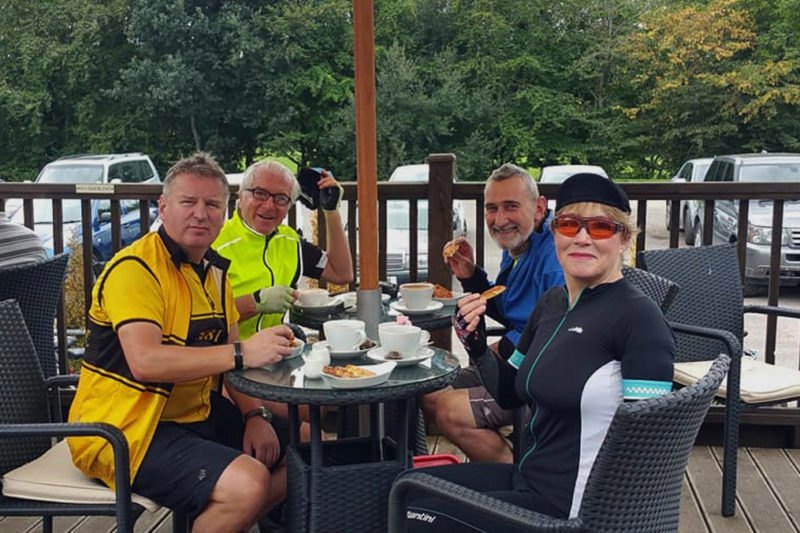 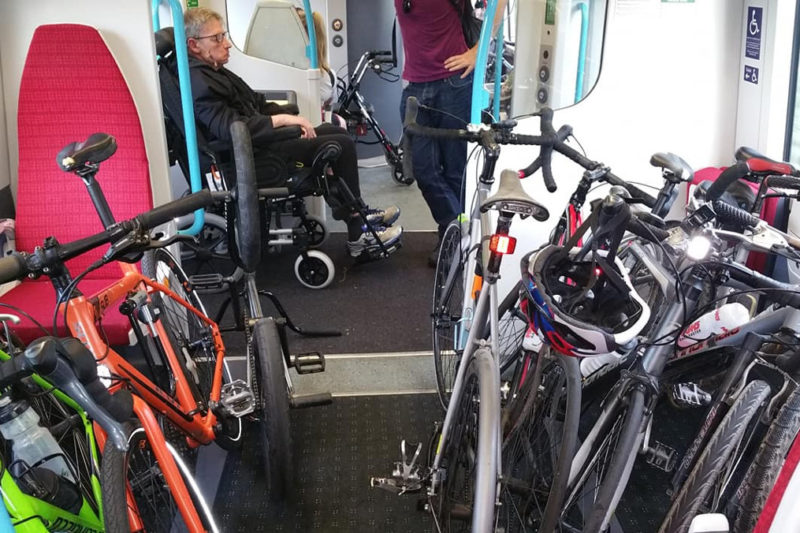 The Saturdays off road away day to the coast.

Three of us Karen, Vince and Pete met at the start with Graham joining us at Redhill.

Our route to Redhill was along Portnalls Rd, down past the now closed, Fanny’s Farm, up past Gatton Park and then onto Redhill Station to catch the 10.30 train to Guildford. We arrived early and boarded the 10.15 before then deciding to get off as it was fast to Guildford and didn’t stop at Shalford (just a few miles south of Guildford and right at the start of the Downs Link way). So with plenty of time to spare we had teas, coffee and sausage rolls and calmly watched the 10.30 train arrive on the opposite platform!

A mad dash followed with four of us plus bikes heading down the steps through the subway and up the other steps, coffee cups and other passengers cast aside in our wake. We just made it.

Arriving at Shalford we found the start to the Downs Link close to the station. The route had been chosen as it follows a disused railway line from Guildford all the way to the coast at Shoreham with 90% of it off road, along well signposted gravel and hard packed traffic free paths.

The jury is still out on whether the route under a canopy of trees for a large part of it was wonderfully flat and quiet or just a tad boring. The first five miles or so were great, almost all of it in a straight line, with the path stretching out ahead as far as you could see. But with the prospect of another 40 miles of the same to go we did start to yearn for some scenic views and even hills!

It’s certainly a popular route for cyclists, dog walkers and families and there was a very friendly atmosphere along the way. Tea stop was at The Milk Churn at Rudgewick which is well situated about 100 yards across a field from the route.

Once at the coast we rode to Brighton arriving on schedule soon after 5 pm, so expected to be back at Croydon for 6 o’clock. Rail engineering works however meant serious delays and a route along the coast to Littlehampton to pick up another line to London. The bus replacement services wouldn’t take bikes so we had to squeeze many bikes into very limited space. Fortunately everybody, including disabled passengers and train staff, were practical and accommodating.

We arrived back at 8pm by which time it was dark so it’s probably an appropriate time to remind club members to always make sure you have lights with you at this time of year – even if you don’t expect to use them.