Gavin’s head hit the tarmac with a sickening thud. There was blood on the ground and Gavin was looking dazed but conscious and compos mentos. But I’m getting ahead of myself. This is a ride report of the day Anerley BC cycled the length of the River Medway.

It was early summer when my thoughts turned to doing a long ride. I wanted to do something different from my “go to” long ride; Brighton and back.

I pulled out my Ordinance Survey Maps and unfolded them on the kitchen table in hope of getting some inspiration. I love studying maps, almost more than reading books. I find them fascinating. So much information clearly laid out in 2d.

North and West were too built up for what I had in mind and South took me on roads that were very familiar so I looked for something in the East. My eyes were drawn to the Medway estuary at Rochester. I wondered where the Medway started? I traced the river back and back. The wide estuary and river soon narrowed and by the time I’d traced it back to the Weir Wood reservoir, just south of East Grinstead, it was a faint blue line.

I jumped on my computer and fired up Kamoot so that I could zoom right in on the Open Street Map. That allowed me to trace the river all the way back to just north of Toys Hill. Two minor streams drain off from Butcher’s Wood and Miswell Wood and follow some powerlines before crossing the B2028. This would be as near as we could get to the source on a public right of way.

So, the next question was how far would it be to cycle from home to the source and then follow the river as closely as possible to Rochester and then cycle back? I returned to Kamoot and started to trace out a route from the source along the river as closely as possible on roads, and occasionally good tracks, to Rochester; 57 miles. I then added the most direct route from my house to the source and from Rochester back home making use of the Pilgrims way and avoiding the more direct route through suburbia; 117 miles and nearly 6000 ft of climbing. Hmm… a challenge but an interesting one with a theme. I always like a theme!

One remaining question would anyone want to join me on the ride?

To my surprise 4 Anerley riders were up for the challenge; Viv, Gavin, George & Martin. Here we all are having set off at 8:30 and reached the source of the river near Toys Hill via Farthing Downs.

All a bit underwhelming. Not much more than a trickle & ditch! Anyone who has cycled up Toys Hill on the B-road will have crossed this; its part way round the sweeping bend before the road climbs steeply into the town. Blink and you’d miss it! 20 or so miles done there was no time for dilly-dallying so we pushed on.

Refreshed we resumed our journey along the Forest Way, a disused railway track, to Hartfield of Winnie the Pooh fame. The river was off to the north but we didn’t really get much of a view of it. We continued East to cross the River Groom at Groombridge (a tributary of the Medway) and then north to be reunited with the river just north of Fordcoombe on the B2188. A bit further on we crossed the River Eden (another tributary) before being reacquainted with the Medway just after Penshurst. The Medway was now starting to look like a river rather than a stream.

The River flows through northern Tonbridge but we cut through the middle of town. The cycling was a bit easier on the flatter terrain around East Peckham and it was not long until we reach Tea Pot Island, Yalding, right on the Medway. After nearly 60 miles we were ready for a lunch break. The River had grown. It’s large enough to support boats, locks and weirs at this point.

Suitably refuelled we re-straddle our bikes and continue to Maidenhead with the River close to our left but out of sight. In the centre of town my route makes a curious turn into a dead-end road and I signal a U turn and that was when Gavin came off his bike and slams his head onto the ground. As he was turning around, he inadvertently turned his handle bars to exactly match the diagonal slots on a drain cover. 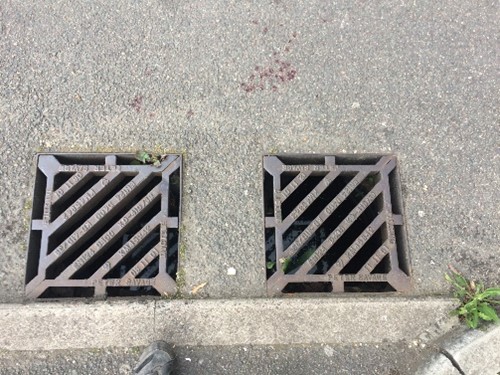 The front wheel fell in and jammed in the slot stopping the bike dead. We were all very worried that Gavin may be concussed and took a few minutes to take stock. Although dazed and shocked Gavin appeared to be ok and joked that he was glad he hadn’t bought the cycle helmet he’d looked at in Forest Row as he would have scratched it!

Gavin’s bike was undamaged although his cycle glasses were broken. We decided not to abandon the ride but keep an eye on Gavin for any sign of concussion.

We cycled through picturesque Aylesford and followed the River to reach Rochester Castle in the late afternoon, 80 miles completed.

Keen to re-fuel before the return journey we searched the quaint pedestrianised High Street and found a good bistro.

After a good meal we headed across the Medway for the last time. Our route took us through Meopham and Kemsing, where we joined the Pilgrims Way and then back home along the familiar roads of Clarkes Lane and Croydon/Limpsfield Road to Croydon. There were quite a few hills but everyone managed to keep going despite the weariness creeping into the legs.

Gavin’s injuries didn’t slow him up and we were relieved to see he had got away with some nasty bruises & scratches but nothing more serious. He is obviously made of tough stuff!

A memorable and good day out with great weather and company!