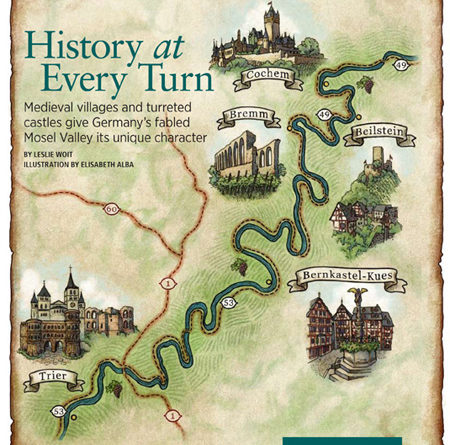 On day 3 we left Brauneburg, and after a short bike ride of only 8k /5 miles we arrived at Bernkastel. Its town charter dates back to 1291 but excavations show evidence of habitation back to at least 3000 B.C. The Romans were here for about 500  years and the staple diet of the Roman Legions was wine and bread. It was the Romans who introduced the vine to the Mosel region to provide the necessary wine for their troops, rather than transport it all the way from Italy. In later years the production and trade in wine lead to the growth and importance of Bernkastel.   The town centre has many historic buildings, the oldest dated 1491.

Here we are arriving in the old town square The cobbled street climbs steeply up from the town square and  we then continued as the road wound it’s way up the wooded hillside towards the ruined castle. There is a tea room in the castle but it was too early in the morning to be open so we just did a photo shoot before heading back down to the river side to continue onwards. After Piesporter wine, the next most famous place for wine on the Mosel is Zell. It’s local wine is named “Schwarze Katz”, in English “Black Cat”. When we arrived at Zell it was festival time and the road thru the town was closed for the carnival floats. All of course decked out with wine themes. Here a rather large bunch of grapes! Whilst the float above bears the words in Gothic script ” Schwarze Katz” and the  costumed revellers are clearly enjoying a glass of their local fine wine!
But we had to depart and continue our travels to our next overnight stop at another famous old Mosel town – Cochen – with it’s impressive castle on the hill above. Our bike computers showed that we had cycled 72k on this, another interesting day’s ride. A small but very pleasant hotel provided our beds for the night. The sign outside suggested that motor cyclists provided more trade than pedal cyclists, but on this occasion the the pedallers out numbered the petrol heads by 5 to 2. We found a very nice restaurant just down the road for our evening meal, at which we were the only customers.  And  more of the delicious local wine flowed. No wonder the Romans stayed for 500 years!