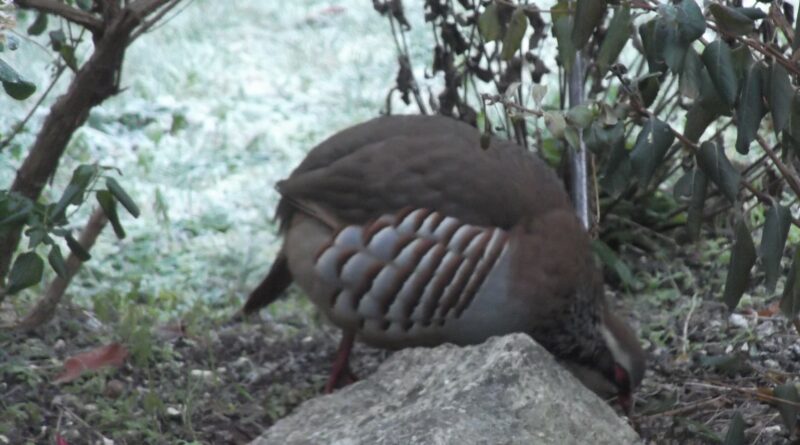 Sorry, nothing to do with bikes or cycling, but I know that several of you are interested in birds – the feathered ones that fly.
On Sunday 11th December, instead of going for a bike ride I did a bit of bird watching.

You will probably remember Sunday 11th December, the day when the so-called weather event – The Troll from Trondheim – unleashed it’s sub-zero polar blast. We awoke to a very severe frost. At first I thought it was snow, but that didn’t arrive until about 5 o’clock that evening – nearly 2 inches of it!

As usual that morning, when I got up and pulled back the curtains – there was our fat feathered friend awaiting it’s early morning breakfast! All puffed up to about the size of a football, to insulate against the bitter cold of the sub-zero temperature.

But what is it? Have you ever seen one of these large, strange birds in your back garden? No neither had I when it first appeared on our bedroom window sill, one May morning nearly 2 years ago. We were awoken by a tap-tap-taping on our window just as the dawn sun was lightening up the sky. This continued each morning until our visitor realised, that if it waited a few hours longer it would get a “late breakfast,” as explained further down.
However, our first reaction to our strange visitor, was to find out what it was. This was quickly answered because my wife’s brother held a professorship at Cardiff University, and his specialism was ornithology! So his immediate reply was that our feathered friend was a Red Legged Partridge.

It is described thus:
” It was known as the ‘French partridge’, and was introduced to the UK from western Europe during the 1700s as a new gamebird.
The red-legged partridge is quite a large, round bird and easily identified by it’s very distinctive plumage – sandy, grey-brown above, with intricate black and brown barring on its sides, and a white throat surrounded by a black necklace. It is known as the Red Legged Partridge because it has a bright red beak and pink-red legs.
Being a game bird it can be spotted in its favoured open scrub and farmland habitats, where it feeds on seeds, leaves and small invertebrates.

“When disturbed, it prefers to run instead of fly, but will fly short distances if necessary. It breeds in open scrub and farmland, laying its eggs on the ground.“

How our lovely Red Leg found it’s way (on foot not by flying!) from open scrub to our enclosed garden in the Greater London metropolis is a mystery. It is not a stupid bird, quite the contrary. After it first appeared in May 2021, it did not take it long to find out that if it walked back and forth along the outside step of our French doors, tap – tapping at each end, it got fed. Most days it does this in the morning and evening – two meals a day! Without any companionship from any other Red Legs, but being well fed, it clearly appeared to feel at home in our enclosed garden!

However it has not lost it’s ability to fly. Even when threatened by local cats and foxes, our Red Leg is a very fast sprinter and only takes to the air as a very last resort. But it can and does fly, when it feels so inclined. On summer evenings it likes to fly up onto to the highest point on our roof, the ridge tiles. It then stands there for ages, making a sort of clucking noise. Perhaps this is a mating call, as yet and unlikely to ever be answered in this, it’s un-natural habitat.

But this was not now summer time but a cold winter’s day, starting with frost and ending with a substantial snow fall. Next morning our snow tipped silver birch was as usual the roost for a variety of birds.

But our large flower pot was empty – no sign of our favourite, fat feathered friend, only a bunch of dull, grey, greedy pigeons squabbling over some nuts that the local squirrels steal and drop from a bird feeder. And all day, and the next day, not a sign of our Red Legged Partridge.