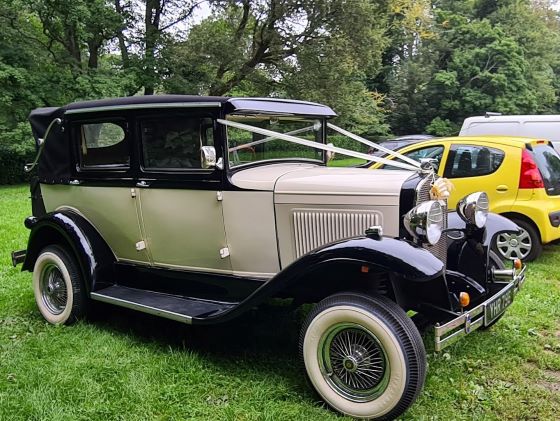 It was a beautiful sunny morning when we set off on a bike ride, down Boxhill and up the challenging climb through Ashcombe Wood to Ranmore Common. Stopping at the top of the climb for a breather, to get some oxygen back into our heaving lungs!
Of course, you have all been up here on many occasions, but where is it?

O.K, guessing over! It is the entrance to where the original Denbies grand mansion house stood, with it’s huge acreage of woods and farm land. Of course better known for the bit which is now, Denbies Wine estate, or to us as a favourite tea/coffee and cake stop!

Back in the days when Anerley B.C first ventured out on their bicycles, to explore the highways and byways of Surrey and Kent, I wonder if they ever ventured up this steep climb? They certainly cycled in this area because their quarterly Rides List shows them visiting the Running Horse pub at Mickelham. If they did, I am sure that they would have known that the owner of Denbies Estate, was the titled, 1st Baron Ashcombe. Also, that he was the wealthy owner of the very famous construction company, Cubitts, which had designed and built Osbourne House on the Isle of Wight for Queen Victoria. It was no coincidence that the new mansion house at Denbies Estate, built by the Cubitts, was a smaller, but still very large version based upon Osbourne House!

So breathe back, time to start pedaling again. But we did not get very far, because it looked like a Mafia wedding was taking place. Where were the gangster hoods, armed with Tommy guns, who rode shot gun on the running boards of Al Capone’s 1930s Cadillac?

Only Denise and I were brave enough to check it out, to see if there was a dead, rival mobster, slumped on the back seat. Luckily, No!

But a wedding means a church, and what a magnificent and beautiful church it is – St Barnabas of Ranmore. Designed and built by the 1st Baron Ashcombe, the title chosen by the famous local builder, George Cubbitt, who lived just down the road at the top of Ashcombe Wood!

The tall, slender, spire of the church is 700 feet above sea level, and can be seen from all the hills in Surrey, even on a clear day from the Crystal Palace which was then on London’s sky line. The spire has been described as “Cubitt’s eternal finger pointing up to heaven!”   But our photo does not indicate it’s full magnificence.

When visited by the Bishop of Guildford Cathedral, he was so impressed by this little church on the hill top of Ashcombe woods, that he remarked, “I have discovered that I have another cathedral – in the woods!”
And this is just part of this beautiful church, designed by George Cubitt in 1857, built, paid for by George Cubitt, and completed in just 18 months in 1859.

But again it was time to mount up, and ride on along the undulating and scenically interesting ridgeway.
Where Ranmore Common Rd becomes Crocknorth Rd (at X rds where Lft turn takes you into White Down Lane and onto Abinger Hammer), we passed a field with a herd of Alpacas, then a sign for a new coffee shop, “Chimney Fire Coffee.” That looked great for a new Anerley refuelling stop. Unfortunately when I got home and Googled it, the shop sells coffee beans, not hot coffee to drink in cups!

Continuing on, along this lovely ridgeway route, we eventually came to the main A246 Guildford Rd, at East Horsley. A Rt and then some minor back lanes brought us into Effingham and our destination. This being (as far as I am aware?) a new tea/coffee stop for Anerley B.C in the local garden centre.

Refreshed, we set off to find a few more hills! And not far to go – at Bookham and a Rt turn, to cross over the A246 again. This followed a long climb. up past the N.T venue of Polesdon Lacey to the top of the ridge. Then it was a freewheel (20% but down!), to come out at Westhumble and the next climb – UP Boxhill! Poor Julie, far left of photo, had been advised to get a light weight bike to conquer the climbs!

But before I close, just a few more words about the “cathedral, in the woods”.
This lovely church has been a much used tea stop for hikers and bikers, because on summer Sunday afternoons, the ladies of the Church served home made cakes! Plus of course, tea, coffee etc. I have been there on a number of Anerley Rides. Hopefully, now that Covid is past it’s worst, the service will be resumed next year. I hope so!

And finally, the church in later years, served another, more personal purpose for the Cubitt family.
George Cubitt and his wife lost their three sons on the battle fields of the Great War.  In 1920 the south transept of the church was converted into a chapel in memory of them. Having visited this memorial, now known as the Cubitt Chapel, I can say that it is a beautiful and fitting tribute to the sacrifice that these three young men made to King and Country.
Des

And P.S 1. I am again indebted to Shakir for being the anonymous photographer who never appears in his works of art.

And yet another P.S!
Just been checking all my postings for errors, only to find that the above link to the history of “The Cathedral in the Woods,” no longer works. Instead I found that a history of St Barnabas and it’s Cubitt Memorial Chapel are both available via this web site https://www.achurchnearyou.com/church/8123/page/40946/view/