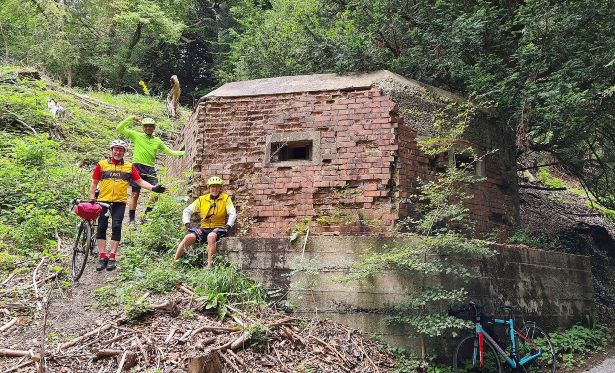 As I wrote in an earlier Gazette, we are not a heads down racing club so have ample opportunity to appreciate the scenery our Sunday and other rides.  Over this last summer I have continued to lead many of you astray on forays into the countryside of Surrey, Kent and Sussex. And at the same time, enlighten you about some of the many items of interest which you might not have noticed, or the significance of which you might not have been aware.  So this time it is a . . . . . PILL BOX!  No it is not somewhere to store your Apple Tablet, but a bit of World War2 history!

I was taking my little group on a ride to Abinger Hammer, and for a change took them out past Bocketts Farm and along the Guildford Rd to Effingham. From there, it was the climb up White Hill to the Ranmore Common ridgeway. Then the easy bit, the steep descent of White Down Lane. I expect that many of you will have enjoyed the exhilaration of going down this very steep hill, but not very many will have tried climbing up it! I did many years ago, try a couple or more times, but failed dismally and had to get off and walk. – A that is when I first noticed the Pill Box.

What you may ask is this crumbling structure, that resembles a colloquial brick s**t house?
No it was not for spending a penny in the woods, but for our Government to spend a small fortune in constructing some 26,000 Pill Boxes, mainly in an arc around the south east to south west of London.

After the military disaster which resulted in the evacuation from Dunkirk in 1941, the huge loss of weapons, military hardware, and of course our fighting men, these Pill Boxes were just about all that was left to delay (no chance of stopping!) the expected landings on our beaches of the German army and the roll of their tanks as they headed to our capital city of London!

Of the 26,000 original Pill Boxes, only some 6,000 remain, many in our local area. I have never gone out in search of them, but I have come across several, mainly when exploring bridleways on my mountain bike. So for MTBers in our club (or gravel bikers) here is a map of locations. Note the defensive cluster along the North Downs ridge, above Shere, Abinger,etc.

The above map indicate where to find these interesting and important bits of local history. You will find out much more from the navigable map for which the link follows, below. For example, if you zoom in to enlarge the righthand map section, south of Betchworth and Reigate Heath you will discover that the Pill Boxes are situated along the River Mole and it’s tributaries. These river crossings acting as natural defensive areas to be reinforced in order to delay an invading army. So do have a look at the real map here: https://www.exploringsurreyspast.org.uk/surrey_pillboxes/

And getting back to our Pill box on White Downs Lane, you can see from this photo, the commanding position it had to direct anti-tank, or other weaponry on anything coming up the hill and trapped within the steep banks on either side of the road.

It would be expected that the invading force would try to access and occupy the Pill Box, but it is designed and positioned to make that as difficult as possible. Thick, reinforced concrete roof, base and walls. And small slits to fire out off, but very difficult to fire into. Plus the advantage of height over attackers struggling up the steep bank.

As young boys after the war, we had many a war game using the structures left over from the real life events of a few years earlier.

But after our fun and games, of again pretending to be soldiers defending our homeland against invaders, it was time for rations at the Abinger Hammer tea room.

For all of you this is probably a bit of boring history but for me it is childhood memories!
I lived in Surrey during W.W 2. Whilst I was too young to remember Dunkirk and the aftermath, the Pill Boxes, Tank Traps and other war time constructions remained for years after. I started school and learnt my ABC and Times Tables in the school Air Raid Shelters, when the V1 Doodle Bugs were flying overhead. And after the war ended, the underground shelters became our Alladin’s Caves to play in. So many happy memories!

For those of you who might be interested to find more about this period in Surrey’s history, or in particular, military history, have a look at this: https://www.exploringsurreyspast.org.uk/themes/subjects/military/pillbox_landscape_features2/