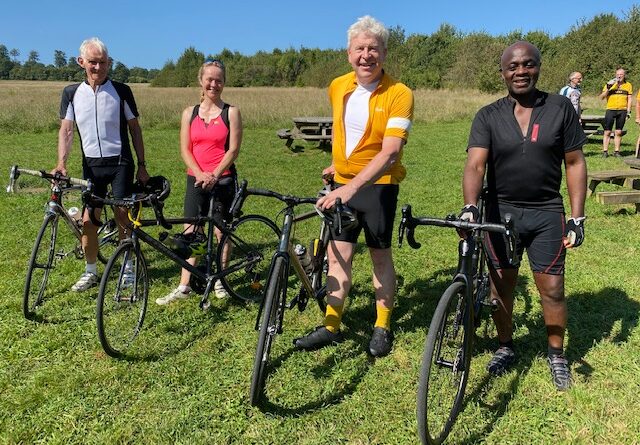 One ride leader talking to another:

Question: “Why is it that all of Des’s rides are annoyingly full while others struggle with numbers?”
Answer” Hold it right there and remember you’re talking to the Gazette Gossip columnist!”

And also on the subject of Des, you will recall a question on group chat asking what was the meaning of “ LSD “ as indicated on some of his rides. Someone asked if that’s the reason why Des is on top form these days. Well of course he’s not on psychedelic trips! LSD means Long, Slow, Distance, but the mystery remains as to why is our most popular club veteran outshining many of us? What’s the secret Des!! On a recent Sunday ride he managed to drop 3 of the group with Sally giving chase, sweating and yelling out to him to stop and wait for them!
Whatever it is Des, we want some of it and a belated Happy 82nd Birthday for earlier this month!

Here’s this month’s low down on our new members, this time from Sam Turner shown 1st on the left, who tells me:

“I learned about the Anerley Bicycle Club through a chance meeting with a current member, Delmar Blakeley  whilst on a British Cycling ride.”

“I was looking for some organised weekday rides exploring different routes and it sounded as though Anerley put on these sort of rides. So I decided to give it a go. Now after a couple of outings with the club I’ve met a friendly bunch who made me feel welcome and have taken me on interesting and varied routes. I’m looking forward to more Tuesday rides with the club.”

Well Sam, hope we have lived up to your expectations!
Denise.