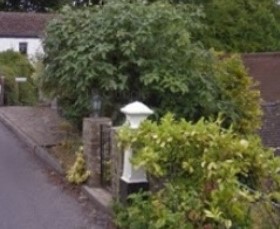 With Our Club Captain in 2008
As we are not a heads down racing club, we have ample opportunity to appreciate the scenery through which we pass on our Sunday Rides.  I thought perhaps in addition to leading you astray on some of my off-road forays, I should also enlighten you about some of the many items of interest which you might not have noticed, or the significance of which you might not have been aware.  So let me start off with . . . . . . COAL TAX POSTS!

Have you seen any of these strange white posts when cycling along some of our roads and country lanes? This one being at Warlingham, down Bug Hill. We pass at least one on most of our local cycle rides, but what are they? And why are they there? The “what are they” is easy – they are commonly known as Coal Tax Posts, or more correctly, Coal and Wine Tax Posts. The “why are they there” is a bit more complex.

There are over 250 of them in a circle, about 15 miles from central London. Some are beside roads like the one above, but you are also likely to come across them if you enjoy exploring our woodlands and local countryside.  So when out walking, or if you are into mountain biking, or a gravel bike rider, keep you eye out, for they can be hidden away in most unexpected places!
They date back to circa 1861, and mark where all roads of that time, entered the then outer boundary of the Metropolitan Police District of London. So they are actually boundary posts. But why then, are they called Coal Tax Posts?  A long story!

Going back to the middle ages, taxes have been levied on coal. But before cart tracks became roads, bulky or heavy goods were moved around the country by ship. The City of London was the biggest market for coal, imported into it’s port at the Pool of London. And this made the tax collection easy.

WHERE THERE IS SMOKE
Now fast forward to 1666. What happened then?
No doubt caused by everyone heating, cooking and baking on coal fired stoves – the Great Fire of London! Considerable funding was required to enable rebuilding, so the Corporation of the City of London was authorised to increase the duty levied on coal arriving in it’s port. This revenue was used mainly for major and necessary works, such as rebuilding St Pauls Cathedral, the City market places, the Guildhall and Newgate Prison, to name but a few.
However, even the Coal Tax was not sufficient to cover the huge costs. Hence in 1694 another tax was imposed, on each tun of wine imported into London. A tun is a cask containing 252 gallons, not easy to miss the eye of the tax collector!

But why is there a Coal Tax Post (actually a Coal and Wine Tax Post) on Bug Hill? I doubt that many 252 gallon tuns of wine got carted up that very steep hill!
I did tell you that this is a long story, so Part II next month. In the meantime, something to keep you occupied. Go out and find the Bug Hill post at O.S map grid reference number 358/577. Note down what letters and numbers are cast onto it, to prove that you did find it. Or better still a photo of you standing beside it! Then either email me with them, or it. Better still put it onto Anerley Chat for all to see!

In case you have forgotten how to find/use a map grid reference you can start off with a more simple 4 number grid reference. In the above example at Bug Hill you can still find the post using the shorter map ref, 35/57 and just follow the road until you see the post. This short video explains how to use it with a map.

If this is all new to you, just remember that a Grid number works the same way and serves exactly the same purpose as the post code that you enter into your Sat – Nav device to locate a place. Simple! So now you too can join in the fun!